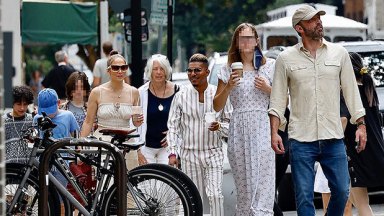 
Jennifer Lopez and Ben Affleck have touched down in Georgia ahead of their weekend wedding! The Monster In Law actress, 53, and The Town actor, 50, were seen exploring Savannah alongside her child Emme, 14, and his three kids Violet, 16, Seraphina, 13, and Sam, 10, on Thursday, Aug. 18 (her son Max, 14, was not seen). They appeared to be walking through the Savannah Historic District — including the famous River Street — where they stopped for coffee: Jen was seen sipping on an iced latte, while Violet held onto a hot drink. Ben’s mother Chris Boldt was also seen with the group.

Ben’s oldest daughter, who he shares with ex-wife Jennifer Garner, appeared nearly as tall as her Oscar winning dad in a gorgeous long white maxi dress featuring a floral print. She paired the breezy number with a neutral pair of gray sneakers, as well as her signature black glasses. The high school student followed COVID-19 protocol with a blue face mask, which she temporarily moved to one side as she enjoyed her beverage.

Meanwhile, Jennifer looked stylish in a neutral beige outfit, consisting of a peasant style cropped tank top with a ruched pattern. The “Dear Ben” singer paired the summer top with a pair of straight leg beige pants with a waist tie and platform black sandals. The Bronx native kept her highlighted hair back in her signature top knot bun, accessorizing with a bold pair of cream sunglasses, a gem pendant necklace and sparkly diamond earrings.

Ben twinned with his wife in a beige button down shirt, paired with a matching baseball hat and his signature jeans. The Boston native appeared to be in good spirits ahead of his nuptials, which are set to include their family and friends. Ben and Jen are already legally married, however: the pair obtained a marriage license on July 16 in Las Vegas after an intimate ceremony at the iconic A Little White Chapel on the strip with just Emme and Seraphina as witnesses.

The couple are set to celebrate their marriage with a lavish three-day affair planned by Colin Cowie and officiated by friend Jay Shetty on Ben’s 87-acre Riceboro property, which is about an hour out of Savannah. The festivities are set to kick off on Aug. 19 with a rehearsal dinner, followed by a ceremony and reception on Saturday, Aug. 20, and finally, a picnic and BBQ on Aug. 21. Set up already appeared to be underway at the home, with white semi-trucks, tents and catering equipment spotted in aerial view shots on Aug. 18.