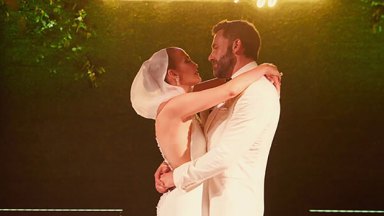 
Jennifer Lopez has released her and Ben Affleck‘s first official wedding portrait! In the sweet photo, which was shared in the singer’s On The JLo newsletter on Sept. 1, Jennifer, 53,  looked up at Ben, 50, with her arms wrapped around him. The photo was taken after their vows, which she read in a custom Ralph Lauren gown that featured a high neckline and short sleeves lined with ruffles. The dress was figure-hugging and simple with no beading, and then flared into a layered, romantic skirt. The back of the dress was made of mesh and showcased a stunning row of white bridal buttons. She completed her look with a beautiful 20-foot veil.

Meanwhile, Ben looked dapper in a white blazer and black dress pants. He wore a white button-down shirt under the jacket and paired it with a black bow. He looked just as in love with Jen as she did with him as he gazed down at her with a serious, but emotional face. In a photo taken as they walked down the aisle as husband and wife, Ben broke his serious stance and traded it in for a huge smile as he celebrated their love with one arm around his bride.

In her newsletter, accompanying the gorgeous portraits, the “Dance Again” hitmaker candidly spoke about her and Ben’s wildest dreams coming true 20 years after they initially planned to walk down the aisle. “Ben and I talked about Marc Cohn’s ‘True Companion’ as the perfect wedding love song in this very house more than twenty years ago. Though Ben didn’t know, I asked Marc to surprise him by singing it at our wedding and he was lovely and generous to come,” she wrote. “As I walked down the aisle, the first song he played wasn’t ‘True Companion’ however. It was his ‘The Things We’ve Handed Down’ — a song about the wonderful mystery of children — something we could only guess at back then, but it was the perfect choice as our five children preceded me on the walk.”

She continued, “The twenty years between those dreams of youth and the adult world of love and family we embraced that day, brought more to this marriage than either of us ever could have imagined. We weren’t only marrying one another; we were marrying these children into a new family. They were the only people we asked to stand up for us in our wedding party. To our great honor and joy, each one did.”

As Jen noted, all of her and Ben’s kids were present at their wedding, and all of them helped their parents walk down the aisle. Jen’s child Emme, 14, twinned with Ben’s middle child,  Seraphina, 13 in white tuxedos as they helped the bride with her long, flowing veil. Violet, Ben’s eldest at 16 years old, looked stunning in a white, off-the-shoulder dress as she trailed behind Emme and Seraphina. Finally, Emme’s twin, Max, and Ben’s youngest, son Samuel, 10, donned suits as well. Max wore an all-white tuxedo like his sibling, while Samuel matched his father in a white blazer and black pants.

Marc began playing “True Companion” when Violet reached the end of the aisle. Jennifer wrote in her newsletter that Ben was both “shocked” and emotional about Marc’s surprise performance. “Later Ben told me that the chords of the song and seeing Marc Cohn both shocked him and allowed him to feel the way both roads we had walked found their way, inevitably, inexorably, and perfectly together,” she said. “And when he saw me appear at the top of the stairs that moment it both made absolute sense while seeming still impossibly hard to believe, like the best dream, where all you want is never to awaken.”