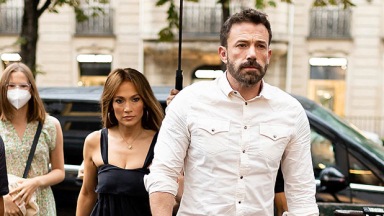 
Jennifer Lopez and Ben Affleck are taking Paris by storm! The Bronx native, 52, and her new husband, 49, looked so in love as they held hands heading to the trendy Manko restaurant on July 22 in the photos below and a posted video. The newlyweds were joined by her child Emme, 14, who identifies as non-binary, and Ben’s daughters Violet, 16, and Seraphina, 13.

The “Jenny From The Block” singer looked stylish as she braved the French heatwave in a sleeveless black dress. The flowy ensemble featured wide straps and a subtle bustier cut. Jennifer paired the dress with platform black sandals and a black bag with a white pattern. She opted to keep her highlighted locks down and in a sleek blowout, allowing her signature silver hoop earrings to peek through.

The couple and their three children arrived to the trendy restaurant, located on Paris’ historic Montaigne Avenue, in a black SUV. Ever the romantic, Ben exited the car first, then offered a hand to Jen as she took a large step down onto the sidewalk! The chic restaurant serves up traditional Peruvian cuisine — and is particularly famous for their quinoa burger — so there’s no doubt Bennifer and their kids had a delicious dinner!

Jennifer Lopez & Ben Affleck Out With Each Other’s Kids: Photos Of The Blended Family

Ben was also looking handsome in a light blue shirt without a tie, and a pair of dressy pants.

The family arrived to Paris by surprise on July 21, kickstarting their trip with a night out at dinner and nightclub Le Matignon. The group of five were at the eatery for two hours and thirty minutes on the terrace, an eyewitness told HollywoodLife EXCLUSIVELY. Ben and Jen also weren’t shy about PDA, as they made out right in front of an unphased Violet, happily displaying their love for the world.

The glamorous trip comes hot off the couple’s unexpected Las Vegas nuptials on July 16, 2022. With a dress from an “old movie” and a jacket from Ben’s closet (per her On The JLo newsletter), the couple flew to Nevada to make their on-again romance legal. Jennifer officially changed her name to “Jennifer Lynn Affleck” per a marriage license filing.