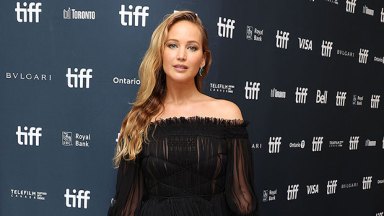 
Looks like Jennifer Lawrence is ready to take back her crown as Hollywood’s It Girl! The Oscar winner has been a bit absent from the red carpet scene as she was busy starting a family with her husband Cooke Maroney, with whom she welcomed their first child together in February. On Saturday (September 10), Jennifer took some “me time” and attended her first premiere since becoming a mother at the Toronto International Film Festival. Rocking a sheer black gown, the Oscar winner alum immediately stole the spotlight.

Other than the TIFF outing, Jennifer has mostly been spotted out with her beau and her baby on casual strolls in New York. The couple appear inseparable after meeting in 2018, getting engaged in 2019 and walking down the aisle in a private ceremony in Rhode Island with a gaggle of famous friends. The happy couple then became parents when their baby arrived just four months ago, but the name and gender have yet to be revealed, although Ellen DeGeneres may have let the secret slip!

Meanwhile, Jennifer has kept quite mum about her marriage and pregnancy, but she did open up a bit about both in a recent Vanity Fair interview. “I haven’t spoken to the world in forever,” she explained. “And to come back now, when I have all of these new accessories added to my life that I obviously want to protect [her pregnancy]…I’m nervous for you. I’m nervous for me. I’m nervous for the readers.”

Jennifer went on to say why she is trying to keep her baby out of the spotlight. “If I was at a dinner party, and somebody was like, ‘Oh, my God, you’re expecting a baby,’ I wouldn’t be like, ‘God, I can’t talk about that. Get away from me, you psycho!’ ” she explained. “But every instinct in my body wants to protect their privacy for the rest of their lives, as much as I can. I don’t want anyone to feel welcome into their existence. And I feel like that just starts with not including them in this part of my work.”