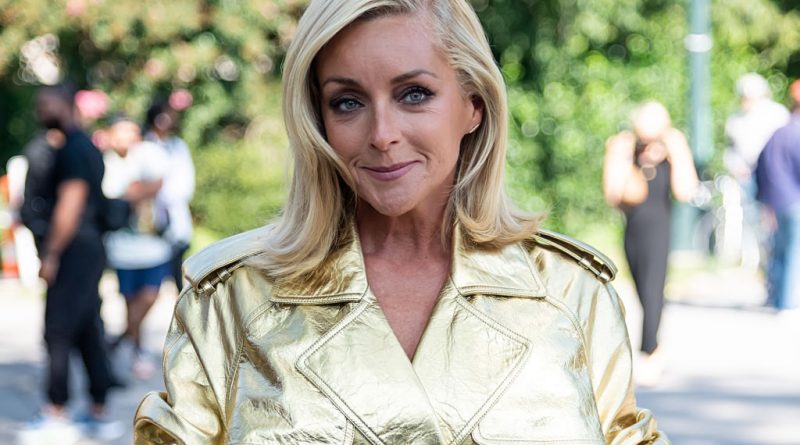 It feels almost like an understatement to say that Jane Krakowski is a gay icon – but the latest season of Dickinson is sure to cement her status as queen of the gays.

The much-praised series, which follows the early adulthood of Emily Dickinson, is back for a third and final outing. Krakowski, always a scene-stealer, is back once more as Mrs Dickinson, the poet’s hilariously outspoken mother.

Most people will know Jane Krakowski from her iconic roles in the likes of 30 Rock and Unbreakable Kimmy Schmidt, where she shows her finely-tuned comedy skills time and time again. There’s plenty of that instinct in Dickinson too – but this show is a different beast. Dickinson is often laugh-out-loud funny, but it also has a habit of suddenly disarming its viewer with aching sadness.

Dickinson‘s third season explores grief, death, family dysfunction and, of course, the Civil War – and with it, Krakowski delivers one of her finest performances yet.

Jane Krakowski speaks to PinkNews about her surprising storyline in Dickinson‘s third season – and the gay icon regales us with a truly electrifying story of flying upside down in a room filled with adoring gay men.

This is the final season of Dickinson – how do you feel knowing that the show is bowing out, and what was it like getting together with the cast for one last outing?

We knew that Alena [Smith, the show’s creator] intended for it to be a three season series, and so we knew going in that we were wrapping it up. It’s always bittersweet to have a final season of a show because you spend so much time and share so much vulnerability and emotion when you’re working with people that closely, but this final season felt even more special.

As the characters got richer and deeper, I think our connection to the entire cast and crew and everyone who makes the show is richer and deeper. We all had to come together and work under the COVID restrictions to have the third season be made, and so I think that bonded us even closer. We all felt a great responsibility to get through what it took to make the season this year.

Your character has such a wonderful arc this season – how did you get into the frame of mind of exploring grief and bereavement?

It came as a surprise to me – I did not know prior to starting filming or to receiving the scripts that that was the journey Mrs Dickinson was going to go on. I was very happy with the material and growth that Alena and all our writers wrote for Mrs Dickinson. I think she got richer and deeper as the seasons went on and became much more of a real person. I felt with season one that she had to be a foe and a pushback device for Emily’s character to set up Emily as rebelling against the old guard or tradition.

It’s wonderful to see how far Mrs Dickinson grew, and I greatly appreciate the sadness and the depth that she starts on, but I also appreciate some of the more joyous moments she got to share, especially with her husband in season three. You don’t see a lot of love and joy come from them before this.

It’s amazing to see how Dickinson has challenged the old-fashioned view of Emily Dickinson as being a reclusive, lonely figure. Was it exciting for you to be involved in a feminist retelling of her life?

Yes, and I think having gotten to know a bit about what the Dickinson scholars have learned over the years has opened our eyes to a much fuller story about Emily Dickinson that I think is beautiful. I was very impressed with Alena, being such a fan of Emily Dickinson, and knowing all of the new material and research that has come out about her. She brought Emily from the 19th century to a representative of young millennia girls today, and I think that was the key to the whole series.

Dickinson has also been praised for exploring Emily Dickinson’s queerness. Was that significant for you to be part of a show taking that on?

Absolutely, 100 per cent. As I say, when we talk about what has been discovered and reanalysed through her writing, I think it’s wonderful that we were able to bring that up front and centre and make that a celebration of her life. Also, working with Alena, I think it was very beautifully conscious that the show was very diverse, both in front of and behind the camera. The show was very committed to having diversity up front and centre, and I think that was really beautiful – and important.

I’m sure you’re aware that you have a huge following in the LGBT+ community. What does it mean to you to have that support from your gay fans?

It’s an honour for me to have that following and I feel like I centre on that audience when I am choosing what roles to play and how I want to bring out the humour in a role. I’m always looking for the – I don’t even know how to say it really! – I’m always thrilled with the appreciation from that audience, so I feel like I kind of mould things based on my appreciation of that following. It’s always with the knowledge of wanting to please and appreciate and entertain that community.

Are there any particular moments you can remember where you really felt the support of the LGBT+ community?

One of my favourite stand out events in my whole career was, there’s a big event here called Broadway Bares – it raises a lot of money for the Broadway community. And one year I performed there, I resurrected my number from the musical Nine where I flew on the silks upside down, and the entire room was filled with the most wonderful, supportive gay audience. It was really one of the great nights of performing in my life because there I was, hanging upside down, I think at Roseland, and all I could see were all of the gay community, my fans, screaming my name. I sort of felt like what it felt to be a rock star for that day, and it was definitely a highlight of performing for the community.

The first three episodes of Dickinson season three are out now on Apple TV+.