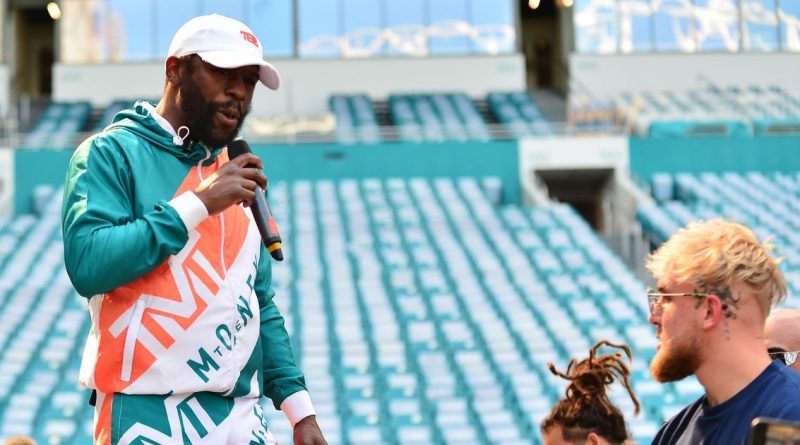 
Paul has made an offer to Mayweather, after the American faced his brother back in June and he has claimed he asked for a professional bout, despite expecting him to retire

And he is now keen to take another professional bout and is searching for his next opponent.

He has offered Mayweather the chance to take him on in a professional match-up but doubts he will accept.

“I don’t do exhibitions, I told Floyd, I actually messaged him and I said ‘Yo, if you want to do a real pro fight at a weight class, then let’s do it,” Paul told talkSPORT.

Jake Paul clashed with Floyd Mayweather at a press conference
(

“But I think he’s going to retire and that’s probably what’s best for him because my brother is a great fighter, but I’m just built different. I would have take Floyd out and that wouldn’t be good for him.”

Mayweather recently fought his brother Logan Paul in an exhibition clash that generated high interest with the YouTuber going the distance.

And the pay-per-view outsold Paul’s later meeting with Woodley with the show doing almost 500,000 buys, according to reports.

Paul has been in talks recently to face Tommy Fury in December, after making a public offer of $1 million on social media.

But the 22-year-old immediately rejected the offer, calling for more financial reward to take the fight.

And Fury’s father John Fury has called for the YouTuber to up his offer in order to get the fight on.

“I want him to fight Jake but he’s got to be paid properly because with one million you’re not getting that are you?” Fury told talkSPORT.

“It breaks down to nearly nothing. He’s not a baggage handler. Pay him proper and you’ll get the fight. And they can afford it. If you can get Tyron Woodley the purse you got, my son is a bigger name than Tyron Woodley so pay him what it’s worth and it’ll be on like Donkey Kong.”

Paul has also been subject to interest from former opponent Woodley, who remains keen to pursue a rematch.

And he tried to fulfil the tattoo bet made pre-fight, in a desperate bid to secure the second meeting.

But the ink did not fulfil Paul’s conditions, and he released a video mocking the former UFC champion.

Paul has also called out another UFC star in Jorge Masvidal, and he is confident that the pair will meet in the boxing ring.

Will Paul face Mayweather during his career? Let us know your verdict in the comments section below.

“We’re talking to four different parties, four different fighters, and seeing which one makes the most sense,” Paul said on the MMA Hour. “Honestly just from a personal standpoint, I would love for it to be Masvidal.

“Hopefully Dana [White] would let him out of his contract but we’re not sure if that can happen, but for me personally, I think that would be the toughest challenge, the toughest guy and the biggest name – the most relevant currently.”