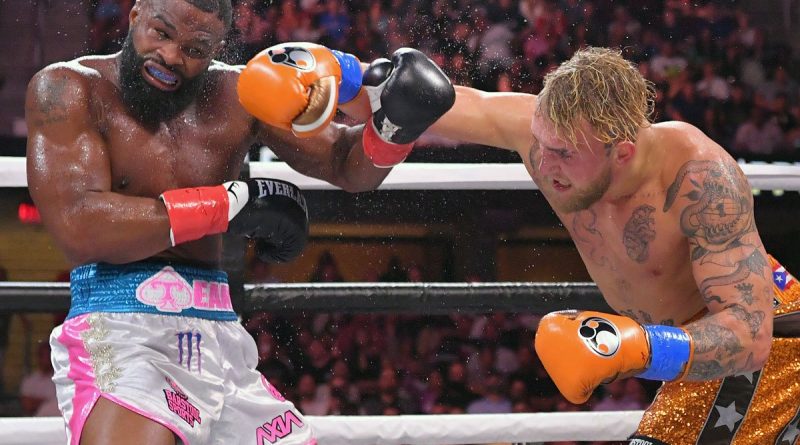 The 24-year-old claimed he banked $100million in the big fight.

Just hours after beating Tyron, 39, in the close match, Jake took to Twitter to reveal he has retired as a boxer.

Jake won his fourth professional UFC boxing fight in the early hours of Monday morning after a split decision.

After a cagey first three rounds, the fight burst into life in the fourth as Tyron finally went on the offensive.

Things settled back down again towards the end of the eight rounds and the judges declared Jake as the winner.

Despite winning, Jake was rocked and hurt for the first time in his “boxing career” in the fourth round.

With a minute to go, the 39-year-old stepped in and went swinging toward his opponent.

Tyron, the shorter of the two men, crashed a huge right hook into Jake’s head.

The YouTuber was stunned and fell back into the ropes and struggled to keep himself upright.

But thankfully for him, Tyron decided to wave his arm around to get the crowd going – rather than going in for the killer blow.

That allowed Jake to catch his breath and recover to see out the remaining 40 seconds of the round.

As fans watched the event, fans rushed to Twitter to accused of match of being rigged.

One fan wrote: “No one can tell me this isn’t fixed. Woodley is barely throwing, he could throw and end this at any time.”

Another added: “Got the feeling Woodley was told not to knock him out. This game is fixed. Fingers crossed for the [Tommy] Fury fight as that’s a different ball game completely.”

A third tweeted: “This is such a frustrating fight. Woodley walking him down then just standing in front of him not throwing a punch. This has gotta be fixed.”

Whether the match was faked or not, Jake claimed he really won by scoring a $100million paycheck.

The social media star took to Instagram on Monday to pat himself for the hefty cash reward following the match.

In an Instagram story video to his 17million followers, Jake captioned a video: “When you get 10 per cent closer to becoming a billionaire.”

The fight was the second-biggest selling pay-per-view of the year behind his brother Logan’s match with Floyd Mayweather.

Despite his claims of earning $100million, reports suggest Jake could have pulled in far less than a nine-figure amount.

Sportingfree.com guessed the former YouTuber could have earned around $2m from the fight including its pay-per-view income.