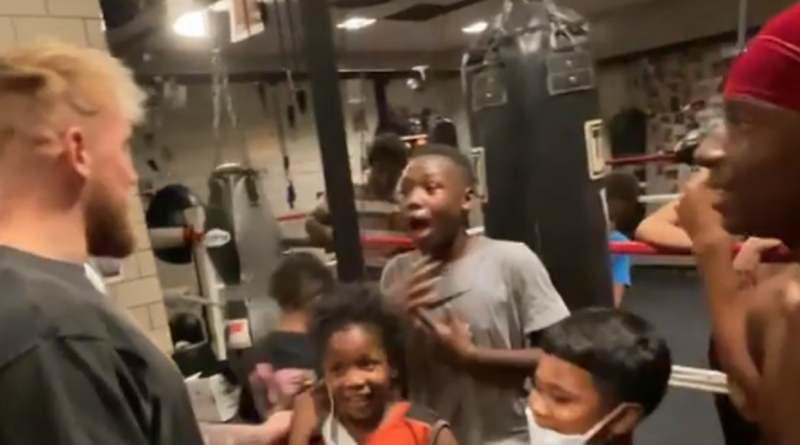 
YouTube star Paul turned to boxing in 2018, and has managed to transform himself from a social media video blogger to a legitimate professional fighter, going 4-0 against Tyron Woodley on Sunday

Jake Paul surprised a group of young fans at a local boxing gym in his hometown yesterday, offering free gloves to the upstart boxers.

The YouTube star-turned-boxer has taken the fight world by storm since moving into the sport in 2018 for an amateur bout, before turning professional in 2020.

And he has been keen to give back to the sport in recent weeks, launching his own charity; Boxing Bullies, to help children around the world to improve themselves through boxing.

Paul started the charity with an event in Puerto Rico where he distributed hundreds of pairs of free gloves to local children in Dorado, where he trained for his latest fight with Tyron Woodley.

And he was back to his charitable ways during the week after his win over Woodley, stopping into a gym in Cleveland, Ohio, and offering young members free equipment and some valuable advice.

Speaking on Instagram, Paul said: “Went and surprise visited one of the local Cleveland boxing gyms and gave out some Boxing Bullies gloves.

“These kids always give me more than I give them.

“All these kids had the heart of a young champ – boxing is the future – remember it’s not cool to bully and every word you say on the internet is permanent.

Paul’s visit to the Cleveland Inner City Boxing Club wasn’t his only charitable action towards the team, with coach Fred Wilson saying that Paul provided free tickets to the Woodley fight to all members.

“Jake Paul looked out on tickets for the whole Team 216,” Wilson said in a social media post. “He made the kids’ day by showing up to the gym.

“Now that’s real class – he also bought gloves for each kids, they will remember this for the rest of their lives.”

The YouTuber defeated Woodley by split decision on Sunday night in front of a packed out crowd at the RocketMortgage FieldHouse.

The decision proved controversial, with many fans and experts believing that Woodley was comfortably beaten in his boxing debut.

But it now appears that a rematch may be on the cards, with Paul seemingly agreeing to the bout, telling Woodley that he would consider it if he gets a tattoo declaring his love for the YouTuber.

“You’re the one that got wobbled,” Woodley told Paul. “If these ropes weren’t so big you would have fallen through them.

“If this was the second biggest pay-per-view of the year, then the rematch will be the biggest.”

Paul announced his “retirement” from boxing after the fight in a tweet, before quickly “returning” within a day.

But he did allude to taking a brief hiatus from the sport, telling Ariel Helwani immediately after the fight that he wants to take some time off.

“I’ve been boxing for 18 months,” he said. “I haven’t been to the dentist, my teeth are crooked, my nose is crooked, I need to take some time.