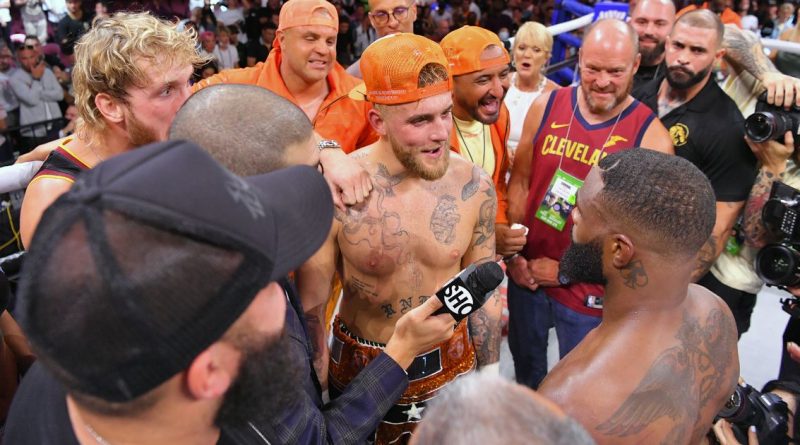 Jake Paul took to social media last night he has retired from boxing following his win over Tyron Woodley.

It was unclear whether he had in fact retired or whether he was trolling his four million Twitter followers.

Paul, who made his name on social media, won his first three fights by KO, albeit against very limited opposition.

But he was taken past the second round for the first time in his career by Woodley who rocked the 24-year-old in the fourth round. Woodley, 39, protested the split-decision verdict and demanded a rematch.

Jake Paul and Tyron Woodley after their fight
(

Indeed, Paul gave little hint he would hang up his gloves earlier on Sunday when he posted a video offering Woodley hope of a second instalment.

Paul was referring to the bet he struck with Woodley before their fight which required the loser to have “I love Jake Paul” tattooed on his body.

The rivals then made a further agreement during the fight’s aftermath when Paul promised Woodley a rematch if he went through with the bet.

Jake Paul’s next fight: 6 potential opponents after win over Tyron Woodley
Jake Paul tells Conor McGregor to “sober up” if he wants fight

“I told him, if he wants to get the tattoo, put it on his Instagram,” Paul said during the post-fight news conference. “Permanent tattoo then maybe we’ll talk about it.

“But to be honest, I won convincingly. We’re gonna go back to the drawing board, but I think I proved a lot tonight.”

Paul has been heavily linked with a clash with British light-heavyweight Tommy Fury who produced an underwhelming performance on the undercard.

He laboured to a decision victory over Paul’s sparring partner Anthony Taylor who was fighting for just the second time as a professional boxer.

And Woodley implored Paul to ignore the Brit and hand him a second shot.

“I feel like if that was the second biggest pay-per-view (of the year), then round two is going to be bigger than that,” he said.

“No disrespect, but f*** the Fury fight. Me and Jake need to run that back!”