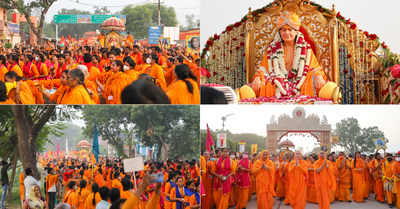 Devotees then pulled the Rath, which began from Bhakti Dham and moved towards the Jagadguru Kripalu Chikitsalaya premises located at Mangarh Dham Road. Here, Prasad was given to all visitors and members of the public. The beautiful chariot was then pulled towards Khanwari Road where many more thousands stood to watch as ‘Hari Bol‘, ‘Radhe, Govinda‘ and ‘Guru, Govinda‘ were sung in an extremely heart touching manner. Along the way, hundreds of villagers stood waiting with Aarti plates and performed Aarti to Jagadguru Shri Kripalu Ji Maharaj when His chariot passed by. The Rath was then taken to Bhakti Mandir as everyone danced with great joy.

Recently, countless young and old devotees showed their love for Jagadguru Shri Kripalu Ji Maharaj by sending in their messages of how He inspired them to think more positively, to treat others with kindness, to speak sweetly with everyone, to chant the name of God with love, to practice ‘Roopdhyan’ – a meditation technique He taught everyone, for focusing the mind on God amongst many other Vedic teachings that have changed millions of lives for the better. Their videos and messages can be seen at the facebook.com/JKPIndia channel and more messages will be shared during the 100th Birth Anniversary LIVE Broadcast on 9th October 2022 at YouTube.com/JKPIndia IST 6:00 pm to 12:30am.

Jagadguru Shri Kripalu Ji Maharaj was born on the 5th October 1922 on the auspicious occasion of Sharad Purnima. By the early 1940s, He started explaining the concepts of devotion through lectures by traveling to different parts of India to share His knowledge. In 1957, He was conferred the title of Jagadguru, by the Kashi Vidvat Parishat, a prestigious and exclusive body of 500 of the most revered Vedic scholars. He was only 34 years of age at the time. Since then He had worked tirelessly to spread the philosophy of the Vedas to the entire world. Masses would gather at the venues to get a glimpse of Him. Now His philosophy reaches millions through television and other online channels.

His contributions include three world known Mandirs – Bhakti Mandir, Prem Mandir and Kirti Mandir. Millions have visited these three Mandirs and many have commented about the extraordinary beauty of the deities of Shri Radha Krishna. He also inspired the building of three large scale charitable hospitals, Jagadguru Kripalu Chikitsalaya in Mangarh, Vrindavan and Barsana. Over the years, these three hospitals have served millions of impoverished.  He also founded Jagadguru Kripalu Parishat Education, which has given free education to thousands of impoverished girls.

The Grand Rath Yatra, which was pulled towards Bhakti Mandir, is the beginning of the celebration events to mark the 100th Birth Anniversary of Jagadguru Shri Kripalu Ji Maharaj. Bhakti Mandir, is founded and built by Jagadguru Shri Kripalu Ji Maharaj as a place for anyone to come and increase their love for God. It is one of the most beautiful Mandirs in the world. Bhakti Mandir is made from makrana marble, granite and pink sandstone, decorated with beautiful mosaics, intricate inlay work and unique black granite pillars. A glimpse of the beautiful forms of Shri Radha Krishna makes everyone want to return back to the Mandir as soon as possible.

Mr Rajeev Taneja, a management representative from Bhakti Dham said that the villagers were all very welcoming and this Rath Yatra event ran smoothly. View the news story and event pictures at facebook.com/JKPIndia

The 100th Birth Anniversary of Jagadguru Shri Kripalu Ji Maharaj will be celebrated in Bhakti Dham. Watch the full LIVE Coverage of the events at www.youtube.com/jkpindia on 9th October starting at 6:00 pm.

Jagadguru Kripalu Parishat was founded by Jagadguru Shri Kripalu Ji Maharaj for the welfare of society. It was established in 1972 (as Sadhana Bhawan Trust) and now continues to run under the leadership of the three appointed Presidents, Sushri Dr. Vishakha Tripathi Ji, Sushri Dr. Shyama Tripathi Ji and Sushri Dr. Krishna Tripathi Ji. Jagadguru Kripalu Parishat is a non-profit, charitable, educational, and spiritual organization, dedicated to increasing spiritual awareness and helping those in need in society as a whole.

Go to www.jkp.org.in/philanthropy to learn about the Philanthropic activities of Jagadguru Kripalu Parishat.

Visit www.jkp.org.in/100th for more information on the Grand Celebrations of the 100th Birth Anniversary of Jagadguru Shri Kripalu Ji Maharaj