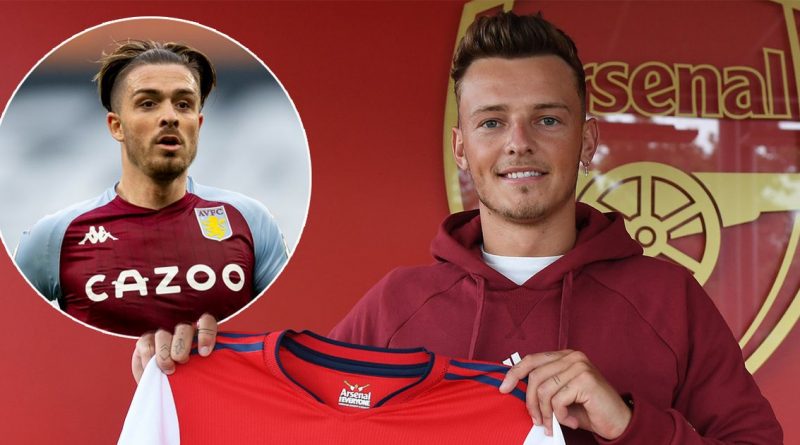 
Grealish has reportedly been the subject of a £100million bid from Manchester City but the Aston Villa captain has reacted to another transfer, England team-mate White’s £50m move to Arsenal

Jack Grealish has reacted to Ben White’s transfer to Arsenal amid the transfer activity surrounding himself this summer.

It’s being reported that Grealish has been the subject of a £100million bid from Manchester City.

On Friday, England team-mate White’s move was confirmed after the Gunners coughed up £50m for the Brighton & Hove Albion defender.

After the 23-year-old posted about the switch on Instagram, Grealish commented: “Congrats brother. Full deserved,” with emojis of a lion and clapping hands.

White’s move will go down as one of the window’s worst-kept secrets, but City’s interest in the Aston Villa captain is hardly muted either.

The Telegraph reported the eye-watering offer – but Grealish is still considering his options.

His boyhood club are also said to have offered him a new and improved £200,000 contract in a last ditch attempt to make him stay in Birmingham.

Pep Guardiola has been a self-proclaimed fan of the midfielder’s, with Grealish often impressing the Citizens boss.

Now said to be a higher priority target than Three Lions skipper Harry Kane, Grealish will have to quickly decide his future after he stayed with the midlands outfit last summer to guide them through to a much-improved and more comfortable 2020-21 campaign.

Is Grealish worth £100million? Comment your thoughts on the bid below.

It’s a transfer saga which could yet rumble on, just as White’s did.

The pair spent the summer together on duty with England and although the former Seagulls centre-back failed to make an appearance, he caught the eye of many thanks to his accomplished friendly displays.

After putting pen to paper on a long-term deal, the new Arsenal No.4 told their website : ” I don’t think I needed too much convincing to be fair.

“Obviously Arsenal speaks for itself and I spoke to the gaffer a number of times during the summer,” White explained.

“I got good vibes and the way the gaffer wants to play, I think I can produce quality in this team and hopefully get Arsenal back.”

Having finished eighth last season to go without European football for the first time in 26 years, Arteta has a new recruit who certainly thinks he’s up for the challenge of returning the club to continental competition.

“For sure. I’ve played in the Football League, I’ve played for a number of teams on loan and the hunger’s still there.

“I’m really happy to be at a massive club like this and hopefully bring the level up of this team.”

Arsenal kick-off their season on Friday, August 13 as they travel to face fellow London side and Premier League newcomers Brentford.

Who Grealish will be playing for isn’t yet decided, but there could soon be movement.