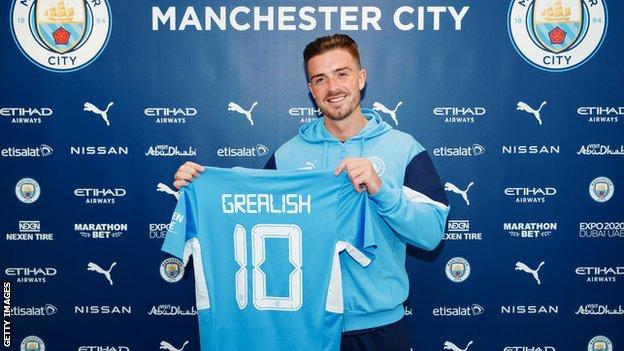 The 25-year-old joins the Premier League champions on six-year contract and will wear the number 10 shirt recently vacated by Sergio Aguero.

The fee surpasses the £89m Manchester United paid to re-sign midfielder Paul Pogba from Juventus in 2016.

“City are the best team in the country with a manager considered to be the best in the world,” said Grealish.

“It’s a dream come true to be part of this club.”

The move makes Grealish the ninth-most expensive player in history.

He could make his debut for Pep Guardiola’s side in Saturday’s Community Shield against Leicester at Wembley.

A boyhood Villa fan, Grealish joined the club aged six and went on to make 213 appearances in all competitions, scoring 32 goals.

He said: “It was obviously a difficult few months because I have been an Aston Villa fan for my whole life, but when I spoke to the manager here and you see what type of players they have got here, in the end it was something I couldn’t say no to.

“Competing for major trophies is something that I wanted to do. It was something I couldn’t turn down.”

City director of football Txiki Begiristain said: “Jack’s development over the past few seasons both for club and country has been plain for everybody to see.

“His natural talent together with his commitment to improve as a player, has seen him become one of the most exciting attacking players in world football today.”

In an address to supporters explaining the reasons behind Grealish’s sale, Villa chief executive Christian Purslow revealed there was a £100m release clause in the five-year deal he signed last summer.

“Jack wanted to be certain if at any point a Champions League club came in for him and Aston Villa were not in the competition we would not stand in his way,” said Purslow.

“For that reason, we agreed to incorporate a so-called release clause. We set the value at a level we hope would not be met, but reflected his true value to Villa.”Manchester City said they would be willing to pay £100m to trigger the clause.”

The rise of Grealish

After progressing through the Villa youth set-up, Grealish went on loan to Notts County, then in League One, in 2013 to gain senior experience.

He making his Villa debut in a 4-0 defeat by City in May 2014 and went on to make 17 Premier League appearances during the 2014-15 season as Villa finished one place above the relegation zone.

During the following season, he scored his first top-flight goal against Leicester City in September 2015 and made 16 league appearances as Villa finished bottom and were relegated to the Championship.

Villa spent three seasons in the Championship before Grealish helped them regain their Premier League status with a play-off final win against Derby County.

He made 36 Premier League appearances during 2019-20 and scored eight goals, including one in the 1-1 draw against West Ham United which secured Villa’s top-flight survival on the final day of a season interrupted by the coronavirus pandemic.

A Republic of Ireland Under-21 international, Grealish announced in 2015 that he wanted to represent England. Having switched to their Under-21 side, he made his senior England debut in a goalless draw against Denmark in September 2020.

He spent three months out injured from mid-February to mid-May as he returned just before the end of the campaign and was selected in England manager Gareth Southgate’s squad for Euro 2020.

Grealish impressed in warm-up wins against Austria and Romania and made one start and four substitute appearances, registering two assists, for England during the tournament.

Find all the latest football transfers on our dedicated page.