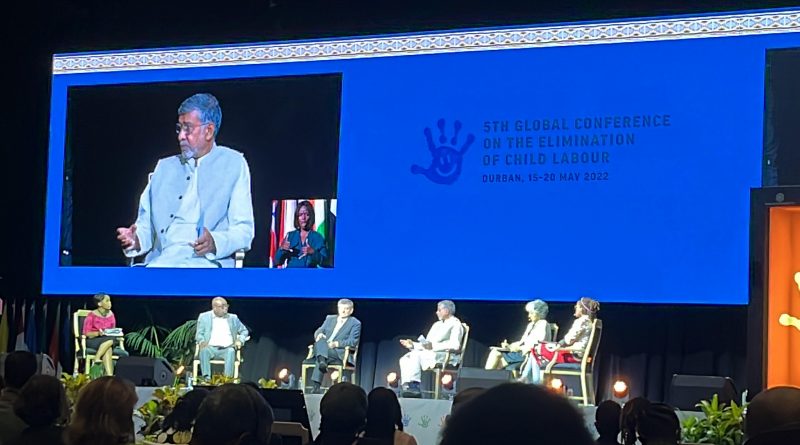 Durban, May 16 (IPS) – “I have been talking to leaders of rich countries to address the problem of post-pandemic economic meltdown. We have to work for social protection for marginalised people in low-income countries and focus on children, education, health, and protection. That is not a big investment compared to what we are going to lose – a whole generation.” – Nobel Laureate Kailash SatyarthiA mere 35 billion US dollars per annum – equivalent to 10 days of military spending – would ensure all children in all countries benefit from social protection, Nobel Laureate Kailash Satyarthi told the 5th Global Conference on the Elimination of Child Labour.

An estimated 160 000 million kids are child labourers, and unless there is a drastic reversal, another 9 million are expected to join their ranks.

The panel discussed child labour in the context of decent work deficits and youth employment. It identified pressing global challenges and priorities for the international community.

Satyarthi said the 35 million US dollars was far from a big ask. Nor was the 22 billion US dollars needed to ensure education for all children. He said this was the equivalent of what people in the US spent on tobacco over six days.

Satyarthi said it was a travesty that the G7, the world’s wealthiest countries, had never debated child labour – something he intends to change.

The panellists attributed the increase in child labour to several factors, including lack of political will, lack of interest from rich countries and embedded cultural and economic factors.

Asked how he remained optimistic in light of the dismal picture of growing child labour rates. Satyarthi told IPS that having been in the trenches for 40 years, he had seen and been happy to see a decline in child labour until 2016 – when the problem began escalating again.

“I strongly believe in freedom of human beings. The world will slowly move towards a more compassionate society, sometimes faster, sometimes slower,” he said.

Satyarthi, together with organisations like the ILO, succeeded in putting the issue of child labour on the international agenda. Through his foundation and in collaboration with other NGOs, he got the world to take note of this hidden scourge.

He is convinced that child labour will be eliminated despite the recent setbacks.

“I am hopeful because there was no ILO programme when I started 40 years ago. Child labour was not recognised as a problem, but slowly, it is being realised that it’s wrong and evil – even a crime. So, 40 years isn’t a big tenure in the history of human beings. This scourge has been there for centuries.”

Yet he recognises the need for urgency to roll back the escalation of child labour.

“The next ten years are even more important because now we have the means, we have power, technology, and we know the solution. The only thing we need is a strong political will but also social will,” Satyarthi said. “We have to speed it up and bring back the hope. Bring back the optimism. The issue is a priority, and that’s why we are calling on markets to globalise compassion. There are many things to divide us, but there’s one thing we all agree on: the well-being of our children.”

Satyarthi said to meet the SDG deadline of 2025, he and other Nobel laureates and world leaders are pushing hard to ensure that child labour starts declining again.

“We as a group of Nobel laureates and world leaders are working on two fronts. One is a fair share for children on budgetary allocations and policies,” he said, referring to the

The group engaged with governments to ensure that children received a fair share of the budget and resources.

Then they are pushing governments on social protection, which he believes in demystifying.

“We have seen in different countries, social protection – helping through school feeding schemes, employment programmes and conditional grant programmes to ensure that children can go to school, with proven success in bringing down child labour.”

The Nobel laureate knocked on the doors of the leaders of wealthy nations.

“I have been talking to leaders of rich countries to address the problem of post-pandemic economic meltdown. We have to work for social protection for marginalised people in low-income countries and focus on children, education, health, and protection. That is not a big investment compared to what we are going to lose – a whole generation.”

Satyarthi said he was heartened by the response to their efforts to motivate governments and the private sector to join the fight against child labour.

“I have been optimistic to say many of the governments and EU leaders are not only listening – they are talking about it. Yesterday only, I was so happy that President Cyril Ramaphosa spoke very explicitly on this issue, and almost everyone was talking about this issue. But it took several months, several years to get there.”

And Satyarthi is not going to stop soon. With the Laureates and Leaders For Children project, he and fellow laureates are determined the world sits up and finds the will to ensure every child can experience a childhood.

This is part of a series of stories published by IPS during the 5th Global Conference on the Elimination of Child Labour in Durban.