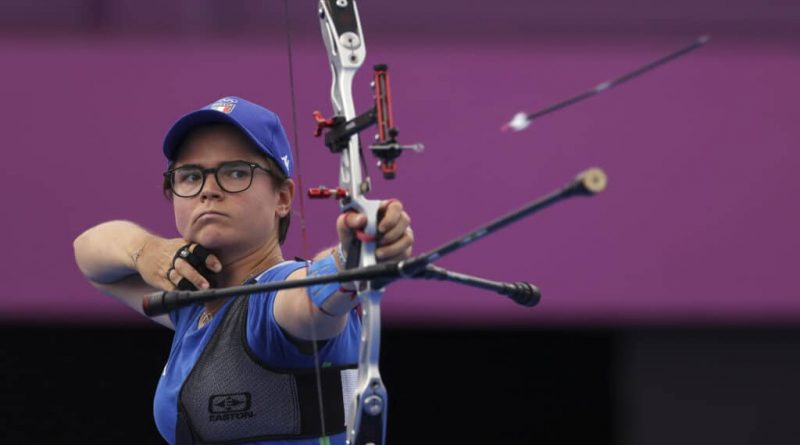 Olympic archer Lucilla Boari came out as LGBT+ in a press conference after being surprised with a touching video message from her girlfriend.

Boari, 24, won bronze in Tokyo on Friday (30 July) when she defeated Mackenzie Brown of the United States 7-1, making her the first Italian woman to win an Olympic archery medal.

After her historic performance she took part in a press conference with Italian media. During the interview, which was live-streamed on Facebook, Boari was surprised with a video message from Saane de Laat, a Dutch archer who’s not in Tokyo.

“It’s super, super, super, amazing and I’m super proud of you. I can’t wait until you’re here so I can give you the biggest hug there is. I love you so much. Great job.”

Boari looked visibly emotional as she listened to the message, tears welling up in her eyes. “That’s Sanne, my girlfriend,” she told the reporters with a proud smile.

Boari’s bronze medal is one of 13 medals won by an openly LGBT+ athlete in the Tokyo Olympics, Outsports reports.

According to World Archery, she looked “almost incredulous” as she hung the historic medal around her neck.

“I made history today. It’s like carpe diem,” she said. “I have been dreaming about this moment quite a lot, if I can be honest, and that dream just came true. I’m the happiest girl right now.”

Boari is the second LGBT+ Olympian to publicly come out this week, following Polish rower Katarzyna Zillmann who revealed she was queer after winning a silver medal on Wednesday (28 July).

Like Boari she casually mentioned it as she spoke to media after the race, taking the microphone to thank her girlfriend.

When asked about the moment by reporters Zillmann explained that she had never been closeted, but her sexuality had just never been reported in the press.

“The conversations with you after the medal race were not groundbreaking for me,” she said. “I’ve already talked about it in interviews before, but for some reason, it wasn’t published.”