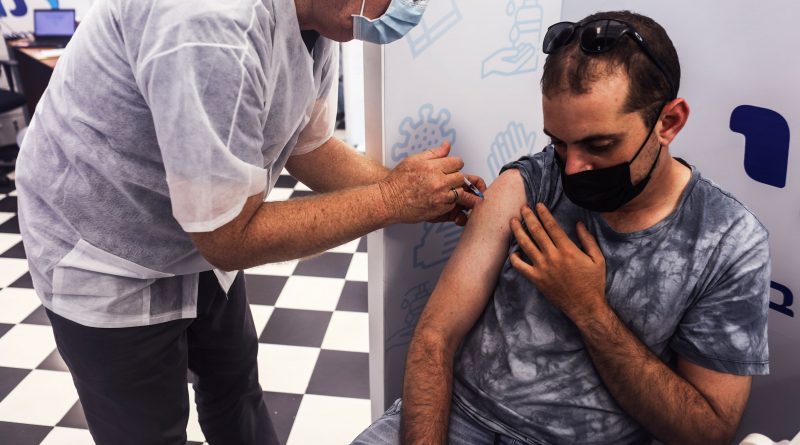 Israeli lawmakers are keen to avoid another lockdown after overseeing one of the world’s fastest vaccination drives. New daily coronavirus infections, however, have just climbed to record levels.

While many nations were grappling with the rapid spread of the highly transmissible delta variant, Covid-19 transmission in Israel declined sharply as the country vaccinated more than half of its population in around two months.

The country had one of the fastest vaccination rollout programs in the world, and by early June many of its coronavirus restrictions were lifted as new cases fell dramatically. But just days later, masks were reimposed as new infection numbers began to creep upward.

Around 63% of the Israeli population has been fully vaccinated, according to data compiled by Our World in Data.

Covid-19 cases in Israel have been rising sharply since July despite the high vaccination rate. New daily cases in the country reached an all-time high of 12,113 on August 24, surpassing the January peak of 11,934.

Just months ago, new cases had fallen to double-digits, and there were some days in May and June where no new infections were recorded.

Despite high levels of so-called “breakthrough cases,” morbidity in the country hasn’t overtaken the peak seen in January, which is widely attributed to the vaccination rollout. On Sunday, 25 deaths were recorded in Israel — a far cry from the record high of 101 on January 20 this year. Over the past month, 476 deaths from Covid-19 have been recorded in Israel, compared to 1,471 in January. But hospitalizations and deaths are rising.

To be sure, everyone over the age of 12 is eligible for Covid-19 vaccination in Israel.

Preliminary data published by the Israeli government in July showed the Pfizer-BioNTech vaccine was just 16% effective against symptomatic infection for people who had received two doses in January. For people who had been fully vaccinated by April, the vaccine was 79% effective against symptomatic infection, suggesting that immunity gained through immunization depletes over time.

However, the analysis did conclude that having the vaccine provided strong protection against severe illness and hospitalization caused by Covid-19.

Israelis receiving a booster shot are required to wait five months after their second dose before they become eligible for their third.

Professor Eyal Leshem, an infectious disease specialist at Sheba Medical Center who has been treating patients on Israel’s frontlines, told CNBC via telephone that while cases were rising, the rate of severe illness remained “substantially lower.”

“We attribute that to the fact that most of our adult population is vaccinated with two doses, and more than one million people have received the third booster dose,” he said.

“The severe disease rates in the vaccinated are about one-tenth of those seen in the unvaccinated, which means the vaccine is still over 90% effective in preventing severe disease,” Leshem added. “People who received the booster dose are also at much, much lower risk of becoming infected, our short-term data shows.”

Leshem said that in Israel, one million out of the country’s population of 9 million had already been confirmed to have been naturally infected.

“We assume that if we have 1 million that were confirmed, we probably have another hundreds of thousands, if not more, that were ‘silently infected,'” he said, noting that this could help to bolster the immunity given by the vaccine.

Ultimately, Leshem said, the goal was not to eliminate Covid-19, but to reach a state of “equilibrium.”

“Covid circulates globally, and it also circulates in wildlife, so it will be very challenging if ever to eradicate,” he said. “Therefore, most of the population will be infected at some point. Hopefully, this will be after they are protected with vaccines and therefore infection will be mild.”

“Many infectious diseases initially emerged in a pandemic form and then reached equilibrium. Of course, the most crucial question is how long is it going to take for us to live normally with Covid? Is this a matter of several years or longer? The vaccines accelerate this process because they allow more people to become naturally infected without developing severe disease,” Leshem said.

Gideon Schreiber, a professor at Israel’s Weizmann Institute of Science, told CNBC in a call that while the Pfizer–BioNTech vaccine appeared to become less effective at preventing Covid-19 transmission over time, Israel’s vaccination booster program seemed to be making “a huge difference.”

“I guess in a few weeks we will see a huge decline in the disease because of the third vaccination doses,” he said. “If you look at the over 60s, which made up most of the severely ill people, they were around four or five times less likely to get severe disease with the delta [after their second dose]. But now they’re more than tenfold less likely to get severe disease after the third shot.”

This, he added, was likely to be because of the fresh antibodies produced in people who received a third dose of the vaccine. It’s thought that a decline in antibodies over time may be behind the waning immunity seen in people who have been given two doses of a Covid-19 shot, but no vaccine is ever 100% effective at preventing a disease.

“We now have a very rapid pace of third vaccinations, so I would guess that the results will be seen very clearly, and in the near future we will see an overall decline of severe disease and of disease [in general],” Schreiber said.

Israeli lawmakers are keen to avoid the reintroduction of draconian measures and are urging people eligible for any dose of the vaccine to get their shot. The reintroduction of some Covid mitigation policies sparked protests in Tel Aviv earlier this month.

“I don’t want to impose a lockdown and I will avoid a lockdown at all costs,” Health Minister Nitzan Horowitz told Israel’s Channel 12 TV at the time. “Everything is open — but we need masks and we need vaccines.”

Schreiber also said he believed the vaccination warranted an end to lockdown measures, even in spite of the high numbers of breakthrough cases seen in Israel and elsewhere.

“If you can reduce the numbers of severely ill people enough to not overload the system, and if you can give reasonably good treatment to these people — and the treatment is better now — then lockdown is really not a good solution. Maybe it was good before there was any vaccine, but now that severe cases are in controllable numbers I’m not a big proponent of this measure.”

Schreiber told CNBC that immunization should be the focus at this stage in the pandemic.

“What we need is vaccination, and vaccination now in Israel is very successful, it seems really to work,” he said. “I’m sure that we’ll see a real reduction in cases in a few weeks’ time, and in severe cases, we [already] see a big reduction. This is what the numbers right now show very, very clearly.”