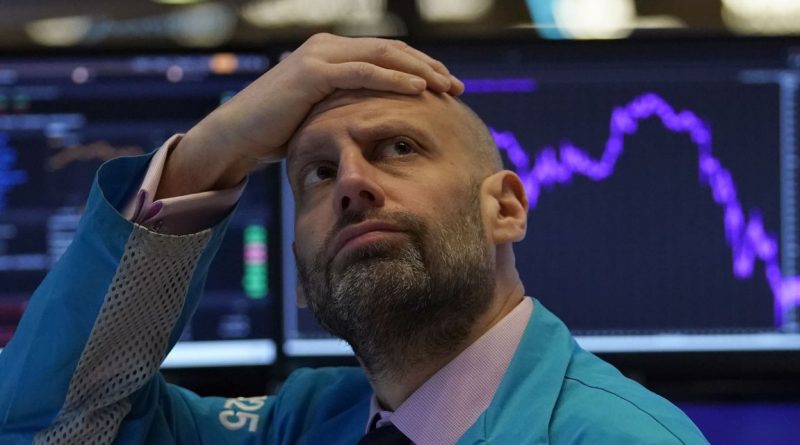 As the stock market has convulsed lower and yields for bonds have surged in recent weeks, culminating in a so-called correction for the Nasdaq Composite Index, average Americans are wondering what’s amiss with Wall Street.

Increasingly, Google searches have been focused on the state of the market (and the economy), and for a good reason.

Read: The Federal Reserve’s first meeting of 2022 looms as risk of inflation outside of policy makers’ control builds

What is a market crash?

To be sure, the market isn’t crashing inasmuch as the term “crashing” is even a quantifiable market condition. Declines in stocks and other assets are sometimes described in hyperbolic terms that offer little real substance about the significance of the move.

There is no precise definition for a “crash” but it is usually described in terms of time, suddenness, and/or by severity.

Jay Hatfield, chief investment officer at Infrastructure Capital Management, on Saturday told MarketWatch that he might characterize a crash as a decline in an asset of at least 50%, which could happen swiftly or over a year, but acknowledged that the term is sometimes used too loosely to describe run-of-the-mill downturns. He saw bitcoin’s
BTCUSD,

move as a crash, for example.

He said the overall equity market’s current slump didn’t meet his crash definition, in any regard, but did say stocks were in a fragile state.

“It’s not crashing but it is very weak,” Hatfield said.

Equity benchmarks are being substantially recalibrated from lofty heights as the economy heads into a new monetary-policy regime in the battle against the pandemic and surging inflation. On top of that, doubts about parts of the economy, and events outside of the country, such as China-U.S. relations, the Russia-Ukraine conflict, and Middle East unrest, are also contributing to a bearish, or pessimistic tone, for investors.

The confluence of uncertainties has markets in or near a correction or headed for a bear market, which are terms that are used with more precision when talking about market declines.

The recent drop in stocks, of course, is nothing new but it may feel a bit unsettling for new investors, and, perhaps, even some veterans.

Underpinning the shift in bullish sentiment is a three-pronged approach by the Federal Reserve toward tighter monetary policy: 1) tapering market-supportive asset purchases, with an eye toward likely concluding those purchases by March; 2) raising benchmark interest rates, which currently stand at a range between 0% and 0.25%, at least three times this year, based on market-based projections; 3) and shrinking its nearly $9 trillion balance sheet, which has grown considerably as the central bank sought to serve as a backstop for markets during a swoon in March of 2020 caused by the pandemic rocking the economy.

Taken together, the central-bank’s tactics to combat a burst of high inflation would remove hundreds of billions of dollars of liquidity from markets that have been awash in funds from the Fed and fiscal stimulus from the government during the pandemic.

Uncertainty about economic growth this year and the prospect of higher-interest-rates are compelling investors to reprice technology and high growth stocks, whose valuations are especially tied to the present value of their cash flows, as well as undermining speculative assets, including crypto such as bitcoin
BTCUSD,

on the Ethereum blockchain.

He said the rise in yields for the 10-year Treasury note
TMUBMUSD10Y,
,
which has climbed more than 20 basis points in 2022, marking the biggest advance at the start of a new year since 2009, is more a symptom of the expectation of liquidity being removed.

“Liquidity is the key driver, not interest rates, as almost all publicly traded stocks have approximately the same duration/interest rate sensitivity so tech stocks are not disproportionately impacted by rate rises, despite market commentary to the contrary,” Hatfield said.

In any case, the rate-setting Federal Open Market Committee is likely to spend its Jan. 25-26 meeting laying the groundwork for a further shift in policy, which the market is attempting to price into valuations.

How often do market’s slump

Investors ought to be forgiven for thinking that markets only go up. The stock market has been resilient, even during the pandemic.

Still, declines of 5% or more are a frequent occurrence on Wall Street.

Sam Stovall, chief investment strategist at CFRA, said that he viewed the current slump for markets as “a very typical tumble.”

“Is it a crash? No. But it is an average decline, believe it or not, it is,” he told MarketWatch over the weekend.

“I would say that the market is doing what it does. A bull market takes the escalator up but bear markets take the elevator down, and as a result people get very scared when the market declines,” he said.

Salil Mehta, a statistician and a former director of analytics for the U.S. Treasury Department’s TARP program following the 2008 financial crisis, told MarketWatch that given the S&P 500’s drop of over 8%, the probability of a 10-14% drop from here is 31%, while there is a one-out-of-five chance of a total drop of 30% or more from current levels.

Stovall said it is important to know that markets can swing back in a hurry after downturns. He said it can take the S&P 500 on average of 135 days to get to a correction from peak to trough and only 116 days on average to get back to break even based on data going back to World War Two.

Stovall says that this downturn may also be exacerbated by seasonal factors. The researcher said that markets tend to do poorly in the second year of a president’s tenure. “We call it the sophomore slump,” he said.

“Volatility has been 40% higher in the sophomore year, compared with the other three years of the presidential term,” he said.

There have been 20 other occasions when the S&P 500 index posted a calendar year gain of 20% or more and experienced a decline of at least 5% in the subsequent year. When such a decline, after a big gain in the previous year, has happened in the first half of the new year, and it has on 12 occasions, the market has gotten back to break even 100% of the times.

Stovall notes that that’s not statistically significant but still notable.

What should investors do?

The best strategy during downturns may be no strategy at all, but it all depends on your risk tolerance and your time horizon. “Doing nothing is often the best strategy,” Hatfield said.

He also pointed to defensive sectors, such as consumer staples
XLP,
,
utilities
XLU,

and energy
XLE,
,
which often carry healthy dividends and higher-yielding investments like preferred stock as a good option for investors looking to hedge in the face of possibly more volatility.

Financial experts normally caution against doing anything rash, but they also say some Americans have more reason to be concerned than others, depending on their age and investment profile. Someone who is older may want to discuss the situation with their financial adviser and a younger investor may be able to hold tight if they are comfortable with their current investment setup, strategists say.

Pullbacks can be opportunities for asset accumulation if any investor is prudent and judicious in selecting their investments. However, downturns often result in hive thinking, with market participants selling in droves.

Ultimately, though investors need to be cautious and smart about how they think about the market, even in the face of so-called crashes.