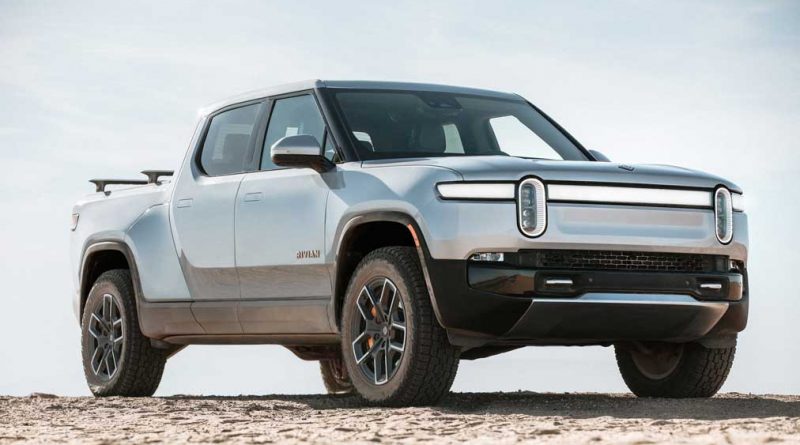 
Rivian Automotive (RIVN) rolled out the first all-electric pickup truck, the R1T, on Sept. 14. On Nov. 9, the much-anticipated RIVN IPO priced strong. The EV startup had a monster IPO and is now the third largest car company by market cap, behind Tesla (TSLA) and Toyota (TM). Is Rivian stock a good buy?


The Rivian IPO priced an upsized 153 million shares at $78 a share Nov. 9. That was above the already-raised price range of $72-$74. Rivian had originally planned to offer 135 million shares. The RIVN IPO raised $11.9 billion, giving Rivian an initial valuation of roughly $77 billion. Shares soared to near $110 in early trading Nov. 10.

Rivian had raised about $10.5 billion in venture capital funding as of mid-2021, including from Amazon and Ford.

Rivian picked a good time to go public, as it is among the few startup EV makers actually producing and delivering vehicles. Lucid Motors (LCID) has more than doubled in the last month, as it began deliveries. LCID stock came public via a SPAC merger earlier this year.

The Rivian IPO is getting lots of attention. But investors shouldn’t try to be the first to buy RIVN stock off the lot. With new issues, investors should wait for initial price discovery and see how they shake out over several days or weeks. Look to see if Rivian stock can form an IPO base.

Rivian plans to announce on Dec. 16 that is will open a vehicle assembly and battery plant in Atlanta, according to a Bloomberg report, citing unnamed sources.

Other states that had been in the running include Arizona, Michigan and Texas. The company currently assembles battery packs at its site in Irvine, Calif.

Next, Rivian plans to open a plant in Europe to start building vehicles by the end of 2023. A site in the U.K. is also possible, as well as locations in continental Europe.

On Dec. 3, The Financial Times reported that the U.K. was offering Rivian more than 1 billion British pounds — $1.32 billion– to build a plant in Somerset. The 635-acre site could be used for battery production, car assembly or both if the plans are approved, the report said.

The Amazon (AMZN)- and Ford-backed Rivian’s R1T beat Tesla and General Motors auto to the punch, as the EV market for electric trucks heats up. Rivian says limited R1T pickup deliveries began in September, with its R1S SUV due out by year-end.

Rivian makes its vehicles at its plant in Normal, Ill. The plant has a production capacity of 150,000 units annually.

The company is prioritizing production of electric vans for Amazon, according to a recent Bloomberg report. Amazon has ordered 100,000 of Rivian’s electric vans. And while Rivian’s R1T pickup has grabbed headlines recently, Amazon’s vans are more likely to be revenue drivers in the near term.

Amazon revealed in a filing on Oct. 28 that it had a roughly 20% stake in Rivian.

The R1T and R1S are equipped with the Driver+ advanced driver assistance system. The Level 2 system assists drivers in a wide range of driving and parking situations. Rivian’s R1 vehicles have 11 cameras, 12 ultrasonic sensors, five radars and a high-precision GPS antenna, which work together with purpose-built algorithms to analyze the surrounding environment.

GM Stock A Buy? Is General Motors Really Worth Less Than Rivian?

Wedbush analyst Daniel Ives was the first analyst to release his initiating report on Rivian, with an outperform rating and a price target of $130. Ives called Rivian an “EV stalwart in the making,” in the Dec. 5 note to clients.

“With the popularity and consumer demand for EVs on the trucking/SUV market, we believe Rivian is in the catbird’s seat to take considerable market share in this EV arms race under its visionary CEO and founder RJ Scaringe,” Ives said.

“We believe the company offers a particularly well thought-out business plan to become a large and profitable EV player, with unique characteristics in both hardware and software, and applying lessons from previous efforts by other players,” he wrote in a note to clients.

Morgan Stanley’s Adam Jonas initiated Rivian coverage with an outperform rating and a price target of $147.

“Rivian’s compelling product, strong management, and deterministic access to capital are underpinned by a strategic relationship with AMZN to decarbonize the final mile,” Jonas wrote in his note. “We see it as ‘the one’ that can challenge Tesla.”

Overall, most analysts initiated RIVN stock at a buy, but there were a few holds as well.

Rivian will report third-quarter earnings Dec. 16 after the market close. Analysts polled by FactSet expect Rivian to post a quarterly loss of $1.33 a share, while sales are seen reaching $926.4 million.

Rivian has yet to post a profit. Rivian is in the early stages of production, and until it scales output, losses are to be expected.

On Oct. 22, it released preliminary results for Q3, which ended Sept. 30. It expects to post a record quarterly net loss of up to $1.28 billion. The operating loss for the quarter is expected to be $725 million to $775 million.

“The negative gross profit relates primarily to significant labor and overhead costs for our manufacturing facility in Normal, Ill., reflecting our factory’s large-scale capabilities,” the company said in an SEC filing. “(H)owever, as we just started to ramp vehicle production at the site, the facility produced limited quantities of vehicles in the period.”

Rivian stock has an RS Rating of 89 out of a possible 99.

Rivian began deliveries of its R1T, a two-row five-passenger pickup truck, in September. It has a 314-mile range on a single battery charge.

Rivian says on its website to expect a range loss of about 50% when towing. The R1T has an 11,000-pound towing capacity, comparable to industry standards for pickups.

However, a Rivian Forum commenter said a R1T owner reportedly tested the EV pickup’s towing range and showed 63% battery degradation after 118 miles. The customer apparently towed a Mustang on an open trailer.

In an Oct. 1 filing announcing its IPO plans with the Securities and Exchange Commission, Rivian said it plans to launch and begin deliveries for the R1S, a three-row seven-passenger sport utility vehicle, in December.

However, Rivian pushed back the delivery target for the R1S SUV has been pushed back to between May and July at the earliest, according to a Nov.24 InsideEVs report. Rivian fell 2.6% on the news.

Founded in 2009 by CEO RJ Scaringe, Rivian enters a growing and increasingly competitive landscape for electric vehicles. A wide array of EV models will launch in the U.S. over the next several months. CFRA Research analyst Garrett Nelson said in a recent note to clients that startups Rivian and Lucid (LCID) are rolling out EVs “with compelling specs.”

These Are The Best EV Stocks To Buy And Watch Now

The Rivian R1T is the first electric pickup to market, but not the last.

GM plans to begin deliveries of its high-end EV Hummer later this year. General Motors will follow up with a Silverado EV as well as a GMC electric pickup for 2023. Ford’s first electric pickup, the F-150 Lightning, is coming in spring 2022. It has a targeted range of 300 miles vs. the Rivian’s truck’s 314-mile range per charge.

Meanwhile, Tesla CEO Elon Musk said Cybertruck production won’t begin until late 2022, with volume production not until late 2023. That could reflect issues with mass producing 4680 batteries, key to making the Cybertruck and the long-delayed Semi and Roadster viable.

Tesla filed a lawsuit against Rivian and a number of former Tesla/current Rivian employees in July 2020 in California alleging trade secrets misappropriations. It recently added to that lawsuit. Rivian says it will fight the charges vigorously.

In the full-size EV SUV space, Tesla led the way with its Model X. But a Model X refresh has gone slowly, while sales are relatively small. The Rivian R1S will have an opportunity to make inroads. GM is coming out with the luxury Cadillac Lyriq in early 2022.

In the commercial market, Rivian has a deal to make 100,000 electric delivery vans for Amazon.com. It plans to deliver the EDVs to Amazon by 2025. Rivian says it expects to deliver at least 10 vehicles in December 2021. But Rivian’s reliance on one big customer is risky.

GM and Ford plan to release electric versions of their delivery vans this year, with futures customers testing them out already.

Rivian also has plans to open a second factory that will not only build EVs but also battery cells.

Rivian’s direct-to-customer model allows it to manage all sales, deliveries and service operations in-house without relying on a franchised dealership network or other third parties. So far, 22 states and the District of Columbia allow Rivian to sell directly to consumers. Those states include California, Florida, Arizona and Illinois.

But several states are challenging Rivian’s DTC model, citing dealership laws. In March, several auto dealership groups in Illinois sued both Rivian and Lucid over their DTC sales model, which they say is illegal.

But Rivian has fired back in a new court filing, arguing that auto dealers undercut their own argument by entering into a deal with Tesla allowing it a limited number of dealer licenses, according to a report from the NPR station at the University of Illinois WPLG.org.

“It is not up to (the auto dealers) to decide which EV manufacturers can and cannot sell directly to consumers. They are not the keepers of the gate for motor vehicle dealers, and are not allowed to choose the winners and losers,” Rivian’s lawyers wrote in the filing, according to the report.

Rivian seeks to have the case dismissed.

Nearly all of these vehicles were delivered to Rivian employees. Rivian expects to ramp deliveries to third-party customers as it increases its production rate.

Rivian says it doesn’t expect to be profitable for the foreseeable future. The company intends to use net proceeds from the Rivian IPO for working capital, to fund growth and for other general corporate purposes.

Meanwhile, Ford recently vacated its seat on Rivian’s board of directors. Although no announcement was made, Ford VP of corporate development Doug Power stepped down from the post last month, according to a Reuters report.

Additionally, on Nov. 19, Automotive News reported Ford and Rivian are scrapping plans to make an electric vehicle together. Ford originally announced its intention to make a Rivian-powered EV in 2019 when it first invested $500 million into the startup. Ford and Rivian have already canceled a vehicle they planned to make for the Lincoln luxury brand in 2020.

Rivian has established its own insurance agency and digital interfaces to manage customer sales, service and renewals. It’s partnering with leading U.S. insurance carriers as underwriters.

“This approach ensures that we own the front-end user experience for the insurance workflow,” the company said in the SEC filing. “We will also earn profit-sharing and performance bonuses based on growth and low loss costs.”

Is Rivian Stock A Buy?

Deliveries are getting underway, meaning Rivian will start generating revenue, with rapid growth from essentially zero seen. But heavy losses are likely to continue for some time.

Until RIVN stock has some sort of track record following the Rivian IPO, investors won’t have a clear buy point.

Bottom line: Rivian is not yet a buy. But keep an eye on this intriguing EV startup to see if it sets up a bullish base.

How To Know It’s Time To Sell Your Favorite Stock