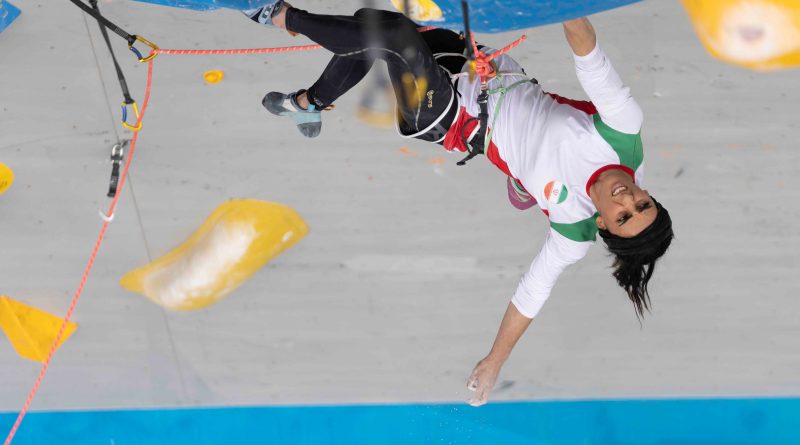 
After Iranian climber Elnaz Rekabi competed in South Korea without a headscarf, athletes who had previously defied the country’s theocratic regime braced for what was to come. The significance of her act was clear.

Apprehensions spiked when Rekabi briefly appeared to be missing; her friends mentioned that they were having trouble contacting her. Then a strange Instagram post attributed to her emerged explaining that her hijab had inadvertently fallen off. When she landed in Iran early on Wednesday, she was greeted by crowds hailing her decision to compete without the hijab. But Rekabi’s remarks at the airport repeated the stilted explanation for her transgression, widely assumed to have been made under duress.

The flashpoint with Rekabi is yet another incident fueling nationwide protests that were first sparked by the death of Mahsa Amini in the custody of morality police; she was arrested for “improper hijab.” Rekabi’s decision to compete without her hijab and the rationale that her actions weren’t an act of protest falls in line with the pattern that many Iranian athletes and protestors say they have faced upon intervention from state authorities. Other athletes who fled Iran for political reasons note that authorities aren’t beyond harassing family members and pressuring individuals to make a forced confession. Female Iranian athletes in particular have been punished and closely monitored with regards to their sexuality, social media activity, and whether they wear hijab.

“We know she’s under a lot of pressure. This is not new for us,” says Sardar Pashaei, a former wrestler who fled Iran to the U.S. in 2010, of Rekabi. “Athletes are speaking out and they’re crossing red lines of the Islamic Republic.” He says Rekabi’s recent statement was in line with how the Iranian regime has treated previous athletes and protestors. “As soon as they get arrested, we don’t know about them for a few days, and then they appear on television and start talking against themselves.”

Pashaei, former head coach of the country’s national team, says he was banned from leaving Iran to participate in pre-qualification Olympic games because his father was a political prisoner. Pashaei is also the executive manager of the United for Navid campaign, which grew out of the efforts of Iranian athletes trying to protect wrestler Navid Afkari following his involvement in anti-government protests. The campaign has frequently called on the International Olympics Committee to punish Iran for its repressive treatment of athletes.

Iran executed 27-year-old Afkari in 2018 despite uproar from international human rights groups. The state had sentenced him to death over the murder of a security guard during 2018 protests, though Afkari had maintained that his confession was coerced through torture.

Iranians in Canada demonstrate against the execution of wrestler Navid Afkari by the Iranian regime, in Toronto, on Sept. 15, 2020.

Soheila Farahani, a former Iranian national volleyball player, is one of several Iranian women who have chosen to leave the country—even if that means being separated from family. Farahani, who identifies as lesbian, fled to California seven years ago after her sexuality came under scrutiny. Iran criminalizes same-sex activity and has sentenced LGBTQ activists to death. Iranian security officials would interrogate Farahani about why she wasn’t married and living alone. “I felt if I don’t run from the country right now I would be put in jail or executed,” said Farahani, who is a member of United for Navid.

Athletes are monitored closely when abroad. “As an Iranian athlete, when you go to international sports, there are always security agents watching you… you’re not allowed to go anywhere,” says Pashaei. “You’re watched even during the stay in the hotel and they often take your passport.” But still, some manage to escape.

As recently as last year, Iranian female handball player Shaghayegh Bapiri defected to Spain saying there was no future for female handballers in the country, Voice of America reported. Bapiri, who was in the country for the International Handball Federation Women’s World Championship, decried the regime’s restrictions on her ability to express herself freely.

Kimia Alizadeh, the only woman from Iran to win an Olympic medal, defected from the country in 2020, citing the regimes’ hypocrisy and oppression of women.

“Whatever they said, I wore … Every sentence they ordered, I repeated,” Alizadeh, who won a bronze medal for taekwondo in 2016, wrote in a lengthy Jan. 11, 2020 Instagram post.

Kimia Alizadeh of the Refugee Olympic Team celebrates after competing in the Tokyo 2020 Olympics, on July 25, 2021.

Current players on Iran’s national soccer team covered their country’s emblem as the national anthem played in a September game against Senegal, after Amini’s death. Forward Sardar Azmoun expressed support for the protests on his Instagram, noting that he feared doing so could result in him being dismissed from the national team.

And under the puritanical rules of the Islamic Republic, Iranian women are routinely barred from entering soccer stadiums—a longstanding issue that has caught the attention of international human rights groups. In September 2019, Iranian soccer fan Sahar Khodayari died after setting herself on fire in front of a courthouse. She had been facing trial for trying to enter a stadium disguised as a man.

United for Navid has requested that FIFA ban Iran from playing in the World Cup, pointing out that Russia was banned from participating as a result of its invasion of Ukraine.

Pashaei and other advocates wrote in an Oct. 18 letter to FIFA President Gianni Infantino that the Iranian Football Federation’s membership should be suspended until they ensure women can enter stadiums across the country and participate in all competitions organized by the soccer world governing body.

“It is impossible to separate the Iranian Football Association’s men’s team from the widely criticised governmental leadership of Iran; they are one and the same and not genuinely independent; if not, the football ecosystem would have been a safe space for women and women would have been allowed to participate,” the letter reads.

The regime has pressured athletes and famous Iranians for decades, “but right now it’s more and more aggressive,” Farahani, the former Iranian national volleyball player, says. And it’s now possible that Rekabi is facing some of that same pressure.

Pashaei says based on the way the Iranian regime has responded to politically outspoken athletes in the past, he believes that Rebaki may have faced an ultimatum: “You have two choices: either you decide not to go back to Iran, and lose your relationship with your family. Or you have to do a forced confession and do whatever they tell you.”