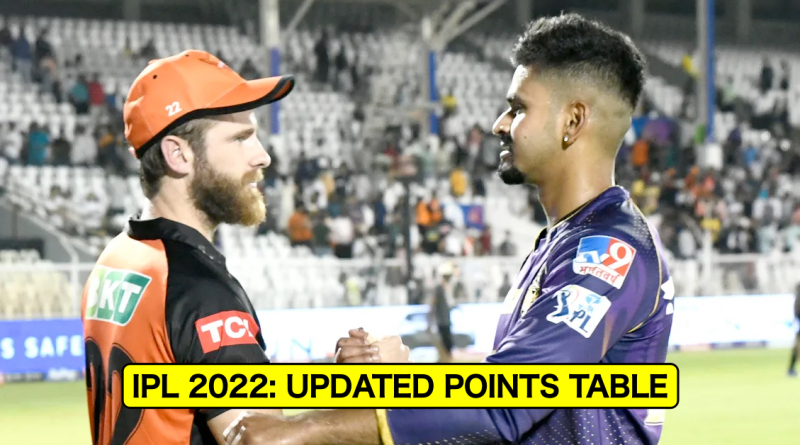 
Rahul Tripathi‘s stunning knock blew Kolkata Knight Riders away in what was a third win in a row for Sunrisers Hyderabad in the IPL 2022. KKR on the other hand has now lost two in a row.

Rahul Tripathi scored a stunning 50 in just 21 balls and further went on to score 71 off just 37 balls which almost sealed the match for SRH.

Earlier in the day Kane Williamson won the toss and chose to bowl first on a pitch that looked like it would assist the seamers.

SRH bowlers responded well to the call as they took 3 wickets in the powerplay.

Shreyas Iyer and Nitish Rana then tried to resurrect the innings but Umran Malik returned in his 2nd spell to clean bowled Shreyas Iyer.

Nitish Rana played a valuable knock of 54 off 36 balls but as he was looking to take off in the slog overs, he was dismissed by T Natarajan.

Andre Russell though did finish the innings well for KKR as he scored 17 in the last over. He finished with 49 runs off 25 balls.

Sunrisers Hyderabad didn’t start well in their response to the chase as they lost both Abhishek Sharma and Kane Williamson early in their chase.

But then Rahul Tripathi playing in his usual self attacked Varun Chakraborty, his former teammate and scored quickly in the middle overs. His quick knock gave Aiden Markram enough time to settle in. This helped them stitch together a great partnership which sealed the match for them.

Markram finished it off with two sixes in the end against Pat Cummins with 13 balls to spare. Markram scored 68 off 36 balls and Nicholas Pooran was there with him in as SRH got over the line by 7 wickets.

This win means that SRH now sits at 7th on the points table, while this loss means that KKR now sits at the 4th position. They are still in the top 4 but they have played a game more than the other teams. Gujarat Titans are at the top of the table.

There were no significant changes in the orange cap list as Jos Buttler continues to lead the chart while Hardik Pandya and Shivam Dube sit at 2nd and 3rd position respectively.

T Natarajan took three wickets and has moved to the 2nd spot in the purple cap list while Yuzuvendra Chahal still leads the chart.