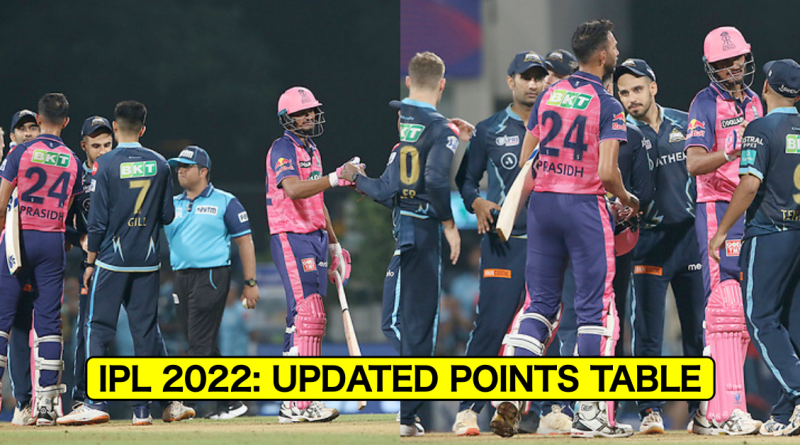 
Gujarat Titans (GT) and Rajasthan Royals (RR) clashed in at the DY Patil Stadium in the 24th match of the IPL 2022.

Gujarat Titans batted first after RR captain Sanju Samson won his first toss in the ongoing IPL 2022 and chose to bowl. Vijay Shankar and Yash Dayal came in for Sai Sudharshan and Darshan Nalkande respectively as GT made two changes to their playing combination. On the other hand, RR had to bring in James Neesham as ace bowler Trent Boult missed out due to a niggle.

Hardik Pandya played a captain’s knock after the openers Matthew Wade (12) and Shubman Gill (13) and then Vijay Shankar (2) fell early. Abhinav Manohar and Pandya stabilized the innings and then Pandya took off after Manohar was dismissed for 43 in 28 balls.

RR didn’t have the best start to their chase of 193-run target as opener Devdutt Padikkal got out for golden duck, while Ravichandran Ashwin, who was promoted to no.3 spot, contributed just 8 runs. But Jos Buttler continued his rich vein of form, hitting 54 runs in 24 balls only with 8 fours and 3 sixes and earning his Orange Cap back from Hardik Pandya.

But then Rassie van der Dussen (6) and captain Sanju Samson (11) fell in quick succession, leaving RR at 90/5 in the 11th over. Shimron Hetmyer (29 in 17 balls) and Riyan Parag got together to try and chase down the total as the required run rate climbed to dizzying heights. But once Hetmyer got out to Mohammad Shami, RR chase lost its wind.

With a win in this match, Gujarat Titans in their IPL debut, reached the pinnacle of the IPL 2022 points table with 8 points from 5 matches. RR moved to 3rd spot with his 37-run loss.

Jos Buttler has kept the Orange Cap on his head, despite losing it momentarily to Hardik Pandya, who moves to no.2 spot with 228 runs to his name as compared to 272 runs for Buttler. Shimron Hetmyer also entered the top 5 with 197 runs to his kitty.

Yuzvendra Chahal continues to hold the Orange Cap with 12 wickets to his name. GT’s Lockie Ferguson entered the top 5 wicket-takers with 8 scalps to his name now.