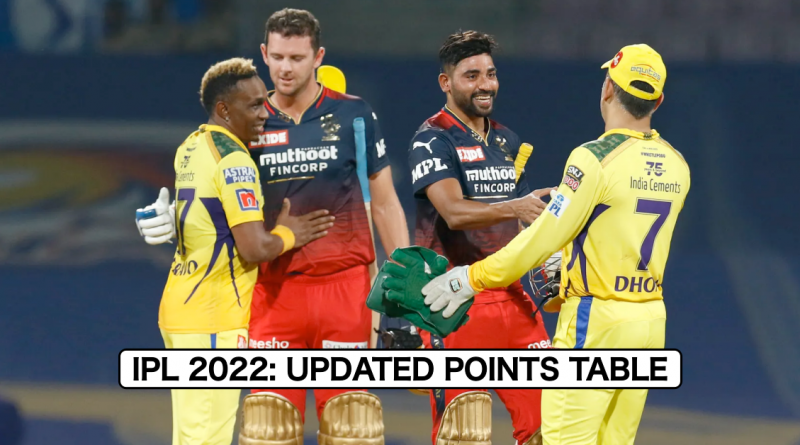 For the most part of RCB’s innings, it looked as if CSK were ahead in the game but cameos by Suyash Prabhudesai and Dinesh Karthik took RCB very close to the target.

It was only in the 18th over when Dinesh Karthik got caught at the boundary that CSK breathed a sigh of relief. He was playing a brilliant knock till then as he had scored 34 runs off 13 balls till then.

Earlier in the day, CSK posted a mammoth 216/4 on the board on the back of two excellent knocks from Shivam Dube and Robin Uthappa.

Dube scored a magnificent 95 not out, hitting as many as 8 sixes and Robin Uthappa scored 88 runs hitting 9 sixes.

CSK did not start well, they lost Ruturaj Gaikwad early in the powerplay. Mooen Ali too got out to a brilliant piece of fielding by Suyash Prabhudesai.

At the end of the powerplay CSK had just scored 36 odd runs with the loss of two wickets.

But then came Shivam Dube with all guns blazing as he counter-attacked with great effect. Robin Uthappa who was struggling with his timing soon got into the act as he hit a couple of sixes off Maxwell.

Both of them soon completed their half-centuries one after the other.

They were in such prime hitting form that both of them combined to score 156 runs from overs 11th to 20th.

In the final over, Dube hit Hazelwood for a couple of sixes and was an eyeing the third one to complete his century, but he mistimed the shot and got dropped by Faf du Plessis in the deep.

Nevertheless, his innings along with that of Robin Uthappa propelled CSK to the highest score of the season.

RCB didn’t start the chase well at all as they lost 4 wickets inside the first 10 overs. Faf du Plessis got out in the 3rd over itself in trying to accelerate the innings. Virat Kohli too got out to rather poor delivery. He tried to flick the ball out of the ground but was caught by the only fielder outside the circle in the area.

Glenn Maxwell and Anuj Rawat too soon departed, Shahbaz Ahmed and Suyash Prabhudesai then had a 50+ partnership but it was broken by Theekshana.

In the end, the task was too difficult for RCB as they lost their 2nd game this season.

This win gave CSK their first points of the season. While RCB might have lost the game but they ensured that they got close to the target which hasn’t affected their net run rate as badly.

Robin Uthappa and Shivam Dube gained places in the list as Uthappa now sits at 3rd position with 194 runs and Dube sits at the 2nd position with 207 runs.

Wanindu Hasranga picked up a couple of wickets in the end and now has 10 wickets to his name. He is 4th on the list which is currently being led by Yuzvendra Chahal.