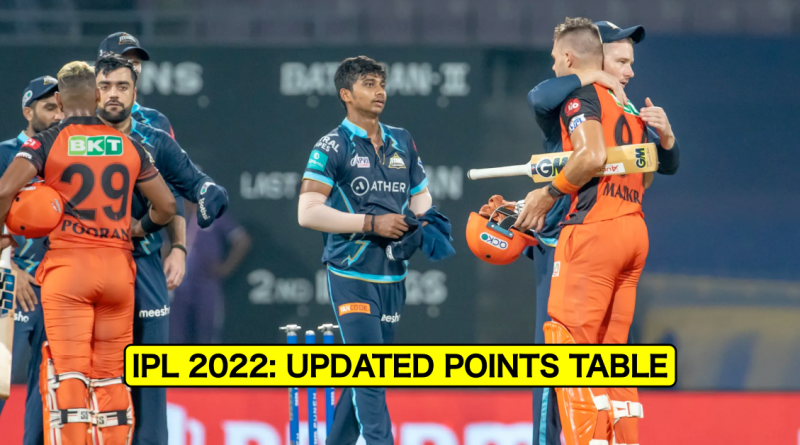 
Nicholas Pooran’s cameo of 34 runs off 18 balls helped Sunrisers Hyderabad notch up their 2nd win of the IPL 2022. They defeated Gujarat Titans by 8 wickets who lost their first game in the Indian Premier League.

Earlier in the day, Gujarat Titans made 162/7 on the back of Hardik Pandya’s 50 off 42 balls, after having to put in to bat by Kane Williamson. Pandya was supported by Abhinav Manohar in the end who scored 35 runs off 21 balls which included 5 fours and a six.

Manohar’s innings gave the impetus GT needed in the end as for the most part GT’s struggled to get going in the middle as they lost wickets at regular intervals.

Despite the poor start, Bhuvneshwar returned in the 3rd over to pick Shubman Gill’s wicket, courtesy of a brilliant catch from Rahul Tripathi.

Sai Sudarshan too got out early, Wade tried his best but failed yet again to register a big score as he was found plumb in front of Umran Malik.

Miller too got out in trying to go after the bowlers.

The pick of the bowlers for SRH was T Natarajan who picked up 2 wickets in the game.

SRH started their chase very slowly as they only scored 11 runs off the first four overs, but then Abhishek Sharma got going. In the 6th over he targeted Lockie Ferguson and took him on. Lockie went for over 15 runs in his first over. That gave the much-needed momentum to SRH’s chase. The first wicket added 64 runs, with Sharma contributing 42 runs. After Sharma was dismissed by Rashid Khan, Kane Williamson took things in his hand and held onto one end. Rahul Tripathi did his job till he was there but he had to retire hurt because of an injury in the 14th over. Nicholas Pooran then finished things off with a six.

Shubham Gill could manage only 7 runs but he has still retained his 3rd position on the orange cap list which is still led by Jos Butter.

At the top of the table is Yuzvendra Chahal, followed by Umesh Yadav and Kuldeep Yadav. T Natarajan got to the 5th position courtesy of picking 2 wickets against GT.