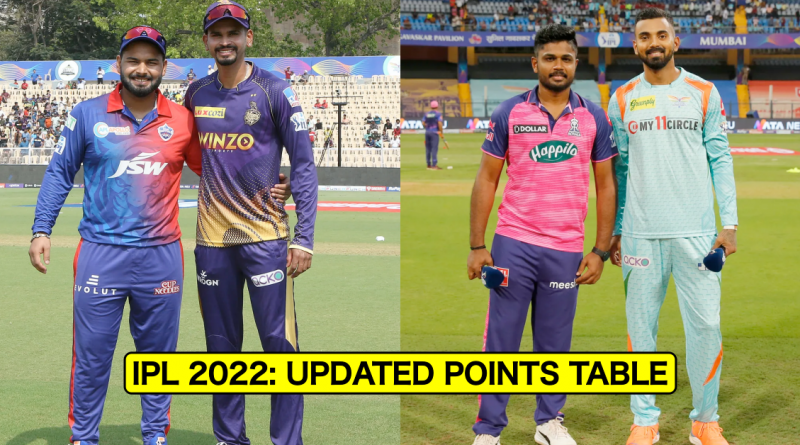 
It was yet another doubleheader day in the Tata Indian Premier League 2022 (IPL 2022) on Sunday as Kolkata Knight Riders took on Delhi Capitals in the first game and Rajasthan Royals took on Lucknow Super Giants in the 2nd game at Wankhede Stadium, Mumbai.

In the first game, Delhi beat KKR with a comfortable margin of 44 runs. After having been put to bat first by Shreyas Iyer they made a whopping 215 runs in the first innings.

Prithvi Shaw was once again in a sublime form as he and David Warner gave DC a very quick start. DC raced to 50 runs in just 4 overs. Shaw got out in the 9th over but not before he had done his job. He scored 51 runs off 29 balls.

David Warner and Rishabh Pant then continued the onslaught as they kept piling on the runs. But then DC lost their way in the middle as they lost Warner, Pant, Rovman Powell, and Lalit Yadav in quick succession.

It was Shardul Thakur and Axar Patel who added 40+ to take the score to 215. At one time, it looked as if DC would score well above 220 but KKR did well to put it back.

Kolkata’s chase didn’t start on the best of notes as they lost both their openers in the powerplay itself. Shreyas Iyer and Nitish Rana then had a little partnership in the middle, but Rana’s wicket just changed things around.

Shreyas Iyer did complete his first 50 since 2020, but he soon got stumped out to Kuldeep Yadav. Yadav picked up 4 wickets for 35 runs and shut the game in his last over. Andre Russell did try to score some quick runs but failed. Kuldeep Yadav was declared Player of the Match for his performance.

Rajasthan Royals pulled off an amazing victory over Lucknow Super Giants by just 3 runs. Young Kuldeep Sen kept his calm to defend 14 runs off the last over against Marcus Stoinis.

For the most part of the 1st innings, it looked like they were down and out as they had lost 4 wickets for 80 off runs. But Ravichandran Ashwin and Shimron Hetmyer had a good little partnership in the middle which brought things back on track for RR. Hetmyer then unleashed his power-hitting abilities in the last couple of overs to power RR to a competitive total of 165 runs.

LSG didn’t start well as they lost KL Rahul and Krishnappa Gowtham in the first over itself. They soon lost Jason Holder as well.
Deepak Hooda and Quinton de Kock then tried to resurrect the innings but Hooda in pursuit of a big shot against debutant Kuldeep Sen lost his wicket in the 9th over.

LSG couldn’t recover from the early jolts as they kept losing wickets in the middle overs as the required run rate was piling up all the time.

Yuzvendra Chahal picked Quinton de Kock’s and Krunal Pandya’s wicket in the same over to end the remaining hopes of LSG to chase the target. Marcus Stoinis then tried his best and scored 38 runs off 17 balls but in the end, his team fell behind by just 3 runs.

Jos Buttler continues to lead the table. While Hetmyer with his 59 moved to the 5th spot. Quinton de Kock is 2nd on the table. While Shubman Gill and Ishan Kishan are the other two batters in the top 5.

Yuzuvendra Chahal got to the top of the purple cap list as picked up 4 wickets against LSG. He now has 11 wickets from 4 games. Kuldeep Yadav is 2nd on the list after his 4 wicket haul against KKR. Umesh is 3rd on the list with 10 wickets same as Kuldeep, but Kuldeep is ahead of him because of a better economy rate.