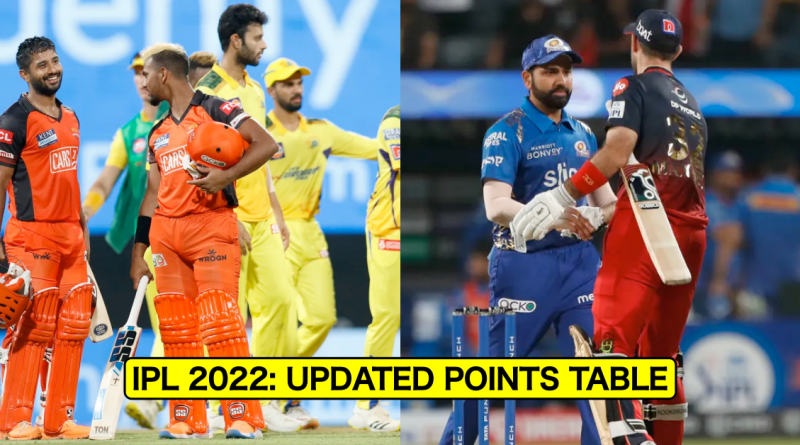 
It was yet another doubleheader day at the Tata Indian Premier League 2022 (IPL 2022) here on Saturday as Chennai Super Kings took on Sunrisers Hyderabad in the first match of the day at DY Patil Stadium and Royal Challengers Bangalore took on Mumbai Indians at the MCA, Pune.

3 out of the 4 teams in action were striving for their first win of the season.

CSK and SRH had lost 3 and 2 games respectively before facing each other on Saturday.

Sunrisers Hyderabad beat CSK in the first game of the day to give them their 4th straight loss on the trot. They in the process got their first win.

They put CSK to bat first and restricted them to 154. They chased the total down with 14 balls to spare as opener Abhishek Sharma scored 75 runs and Rahul Tripathi chipped in with 39 runs off 15 balls.

The best bowler for SRH on the day was Washington Sundar who picked up 2 wickets for 21 runs.

CSK did not have any answers for Abhishek Sharma and Rahul Tripathi as they eased their way through the chase.

Mumbai Indians were coming into the game with 3 straight losses on the trot. They surprised everyone when they entered the field with only 2 overseas players. They dropped both Daniel Sams and Tymal Mills. It was for the very first time that MI went in with just 2 overseas players.

It didn’t seem to work out well for them as they lost the game by 7 wickets. This is their 4th loss on the trot.

They were put in to bat. They started well with the bat as they scored 49 runs in the powerplay but then they lost their way in the middle as they lost 6 wickets for just 29 runs. It was a Suryakumar Yadav’s master class that took them to a respectable 151-6 at the end of their innings.

Harshal Patel and Wanindu Hasaranga picked up a couple of wickets each. Mohammad Siraj was disappointing yet again as he gave away 51 runs in his 4 overs.

RCB started the chase well as the openers had a 50+ stand. Once Faf du Plessis got out, Anuj Rawat took the innings forward along with Virat Kohli before getting run out for 66 runs when RCB just needed 22 more runs to win. Kohli too got out with just 8 needed, but Glenn Maxwell finished it off with two consecutive boundaries.

Ishan Kishan scored 26 runs off 28 balls and moved to 3rd position on the orange cap list. It’s still headed by Jos Buttler who has scored 205 runs.

Wanindu Hasaranga picked up a couple of wickets and moved to 2nd spot on the purple cap list. Umesh Yadav still leads the table with 9 wickets. Yuzuvendra Chahal and Rahul Chahar are 3rd and 4th spots respectively.