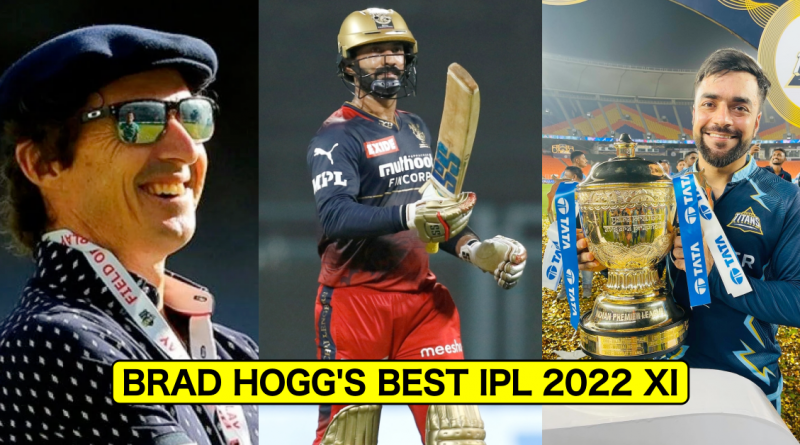 
Brad Hogg, a former Australian spinner, has named his best IPL XI from the competition’s most recent edition.

Hogg announced tournament-winning captain Hardik Pandya as the captain of his side too, on his YouTube channel.  There were some intriguing players in his final XI.

Hogg began his lineup with Jos Buttler and David Warner as his openers. The Rajasthan Royals’ star was the highest run-getter of the edition, with 863 runs and four centuries. Warner had a great season with the Delhi Capitals, scoring 432 runs in 12 games for an average of 48 runs per game.

“Jos Buttler – obviously, first-choice opener, leading run-scorer, and most 100s in the tournament. He generally bats through the innings for the Rajasthan Royals and does a fantastic job, so he is at number one. At number two, I have the batsman with a higher strike rate and I’ve got David Warner there. He’s got a pretty good average throughout the year as well, so he complements Buttler.”

“Coming to number three, I thought Tripathi was one of the best batsmen from the SunRisers Hyderabad team and he carried that middle-order. Under pressure, he delivered and he’s been very consistent over the last two years. He might get an opportunity for India sooner than later, but he is my number three for this year’s IPL.”

Pandya and David Miller are the next two players. After his impactful all-round abilities, he named the Baroda all-rounder as his captain. Meanwhile, Hogg praised Miller as the competition’s top finisher, praising him for completing many tasks for the Titans.

Moving forward, Hogg chose Dinesh Karthik of Royal Challengers Bangalore at number six because of his experience completing games against a variety of bowlers. In his hypothetical XI, Hogg also put Karthik behind the stumps.
Ravichandran Ashwin’s batting prowess and ability to bowl spin at any stage of the innings also pleased the 51-year-old. Hogg chose Gujarat Titans’ Rashid Khan at number seven because of his all-around performance this season.

He believes that by keeping things tight, the Afghan leg-spinner makes life easier for the other bowlers.
Finally, Jasprit Bumrah, Mohammed Shami, and Harshal Patel were chosen as Hogg’s three bowlers.

Bumrah and Shami, he believes, may open the bowling, with Patel filling in in the middle.