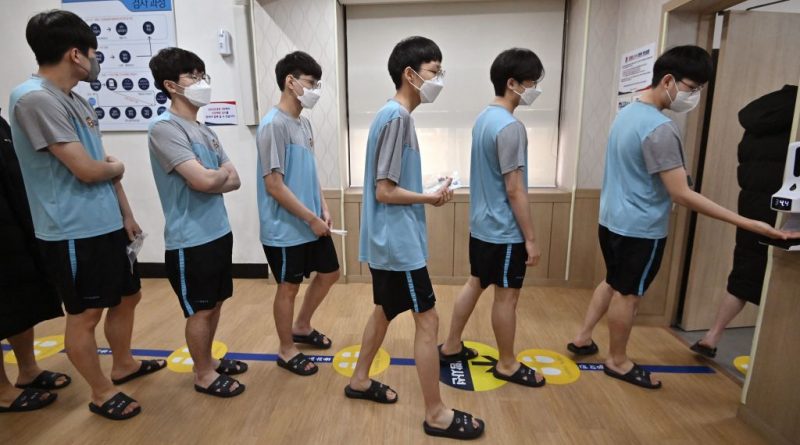 
As a conscientious objector in South Korea, Kim Hye-min fought conscription for years. The 28-year-old belongs to the Jehovah’s Witnesses—a Christian denomination that takes a principled stance against war. Its members refuse the minimum 18 months of military service required of all able South Korean men between the ages of 18 and 35.

In 2016, Kim was acquitted of violating conscription law. Two years later, South Korea’s Supreme Court cited the experience of Kim’s co-religionists in its ruling that conscientious objection to military service was not a crime.

The court’s finding put the onus on lawmakers to draw up an alternative to the draft—which now exists. But when the Military Manpower Administration called him up for it, Kim refused to go.

“I told them that I have no intention of reporting,” he tells TIME from Gwangju, a city of 1.5 million people some 167 miles south of the capital Seoul.

The reason? The alternative doesn’t look all that different to jail.

In return for being exempted from military service, South Korea’s conscientious objectors are expected to work in the country’s prison system. They’re typically rotated between jobs in prison laundries and kitchens, with stints of administrative duty. They also serve 36 months—twice as long as military conscripts. Although they are given a few weeks’ leave, they have to live in the prisons, where their movements are regulated.

Almost 900 men are currently subject to such orders, many of whom are Jehovah’s Witnesses. (According to the defense ministry, as at the end of June another 1,485 eligible men were still waiting to be called in for alternative service). Unsurprisingly, objectors feel they are being given a punishment rather than another way of serving their country.

Kim goes to court on Oct. 13 for his refusal to perform service in a correctional facility. He wants his case to draw attention to the controversial treatment being meted out to South Korea’s conscientious objectors.

“I’m hoping that the trial will improve the current situation,” he says.

Young South Korean men take part in a medical checkup for conscription at the Seoul Regional Military Manpower Administration in Seoul on February 7, 2022, as South Korea maintains a conscription system that requires almost all healthy male citizens to serve the military.

Avoiding the draft in South Korea

An armistice agreement has been in force on the Korean peninsula since 1953, but technically the South is still at war with the nuclear-armed North, and conscription is taken very seriously. The government keeps a public database of evaders. Applicants for conscientious objector status endure intense scrutiny of their private lives—having to satisfy investigators, for example, that they have never played violent video games.

Before the alternative to military service was offered, objectors were jailed, with some 19,000 Jehovah’s Witnesses thrown behind bars over the years for their stance. During the years of martial law in the 1970s, some were tortured, beaten, or even killed. To this day, members of the denomination are social pariahs.

Others who manage to avoid service also meet with opprobrium. Nineties K-pop sensation Yoo Seung-jun was due to be drafted in 2002, but he renounced his citizenship just before his call up. There was a huge public backlash and Yoo has been banned from setting foot in South Korea ever since.

In 2004, MC Mong, one of South Korea’s most successful television personalities and hip-hop artists, had 10 teeth removed. The artist says it was a necessary dental operation that led to a legitimate exemption from military service—but his career never recovered.

Read More: The Dark Side of Living in South Korea

Although the law allows civilian service in “areas of public interest” besides prisons, for now work in correctional facilities appears to be the only option. Those serving can only leave their assigned jails on certain days. A 9:30 p.m. curfew is imposed. Phones and other devices must be handed in during working hours.

Rights groups have called out the South Korean government for the punitive appearance of the system. Amnesty International says that South Korea’s 36 months is the longest period of civilian service in the world. (By comparison, the Council of Europe has set a “reasonable” maximum length for civilian service at 1.5 times the duration of military conscription.)

In reply to questions from TIME, a defense ministry spokesperson said improvements to alternative service could only come “after the system is settled stably.”

In the meantime, being out of circulation for three years is creating professional and personal setbacks for objectors.

“I worry about when I get back to society, whether there will be difficulties,” says Kim Jin-wook, about to begin his third year of work in Mokpo prison, a few miles outside of Gwangju. He speaks wistifully of Taiwan, where conscription and civilian service are both set at just 12 months.

South Korean Jehovah’s Witnesses, who are conscientious objectors to mandatory military service, await an induction session at a correctional facility where they will begin working, in Daejeon on October 26, 2020.

To be sure, it isn’t just conscientious objectors who are facing difficulties. Many Korean draftees speak of the abuse that comes with the military’s deeply ingrained “barracks culture.” Bullying and sexual assault have led to suicides and shootings.

Cho Kyu-suk is a coordinator at the Seoul-based Center for Military Human Rights in Korea, a non-government organization offering counseling for those traumatized by their experience of the armed forces. He argues that an overhaul of South Korea’s military system is overdue.

“In order to better the alternative service, we also have to improve the active service environment,” says Cho.

Who gets to avoid military service is always a hot-button topic. Many allege that the conscription system can be worked by the elite. The Korea Times reported that the scions of several chaebols—as family-run business conglomerates are called—have been given waivers. A government minister has called for global K-pop stars BTS—whose members are reaching the upper limit of drafting age—to be granted an exemption.

Cho says that regular conscripts regard military service as a kind of punishment to be stoically borne—which is why they have little sympathy for objectors.

“Active military service is accepted as punitive and as a penalty and disadvantageous,” he points out. “[Conscripts] cannot be generous about those who do not get the punishment. They are eager to see everyone get punished equally. That’s their concept of fairness.”

The defense ministry tells TIME it intends to resort to “social consensus” to handle the issue. It already plans to survey the public over whether or not BTS should be spared conscription.

For now, conscientious objectors feel that they are getting more than their fair share of the burden.

Park Ju-young, 28, is currently living and working in Jinju prison, around 170 miles southeast of Seoul. “I feel that I should be working for society,” he says, “but it doesn’t feel that way.”

He also feels unsafe being in close quarters with hardened inmates. “It makes me very nervous and I think about how I can get away,” Park says. “I hate it.”

—With reporting by Soo Jin Kim