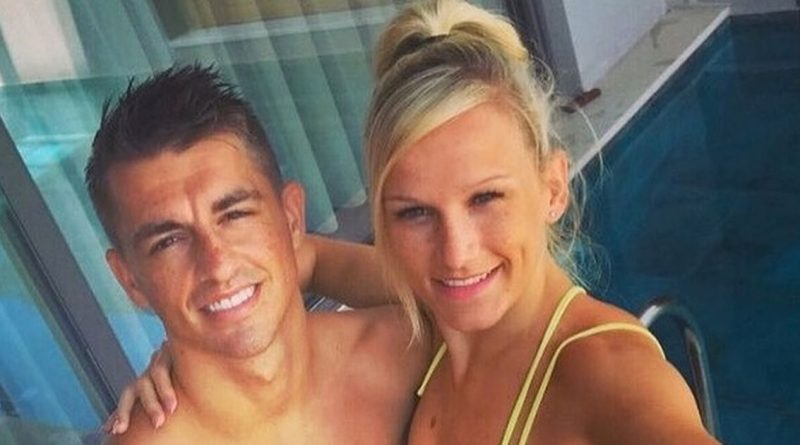 Max Whitlock has retained his Olympic pommel horse title after an incredible performance in the Tokyo 2020 Olympic Games.

The 28-year-old scored a whopping 15.583 for his near-perfect routine on Sunday, August 1, with the other seven gymnastics unable to beat him.

Max is already a three-time world champion, and his biggest cheerleader is his wife and childhood sweetheart, Leah Hickton, who is cheering him on from home.

Together they have a daughter, Willow, who is two years old – and they also run Max Whitlock Gymnastics.

Here we take a closer look at their relationship, how they met, and what Leah does for a living.

Who is Max Whitlock’s wife?

Max Whitlock is married to childhood sweetheart Leah Hickton, 29, who is also a gymnast.

Leah is from Basildon, Essex, and has been together with the Olympic champion for 14 years.

The couple met at their local children’s gym South Essex Gymnasts Club when they were just 12 years old.

It took a couple of years for Britain’s greatest ever gymnast to pluck up the courage to ask Leah out, but they have been smitten ever since.

Max and Leah got engaged in 2016 just as the gymnast was preparing to travel to Rio for the Olympic Games.

The Olympic gymnast had planned a weekend away to the Lake District, which Leah said was “not like him”.

Speaking to the Express, Leah said: “It was a beautiful place and we went for a walk around the grounds and he laid down a picnic blanket and asked me.”

At the time, Max said proposing was “probably more nerve-racking than being in an Olympic Games”.

They tied the knot in 2017 in a beautiful ceremony surrounded by their friends and family.

In 2019 Max and Leah welcomed their first child together, Willow.

“It’s the most amazing, proud indescribable feeling! My girls are incredible”.

Max and Leah have a daughter together
(

In his post, Max shared a black and white snap of Willow’s hand clasping his.

Speaking to Daily Mail last year, Max explained how since having his daughter he has “gained a newfound respect for Leah,” adding “as a man you can only do so much”.

He added: “Watching her go through eight hours of labour in hospital was one of the scariest feelings in the world.

“She was incredible, using hypnobirthing techniques to cope with the pain.”


Max and Leah celebrated their fourth wedding anniversary together this year, and they both scared a picture from their big day.

Leah wrote: “Happy 4th wedding anniversary to the love of my life @maxwhitlock I love you so much x x x x x”