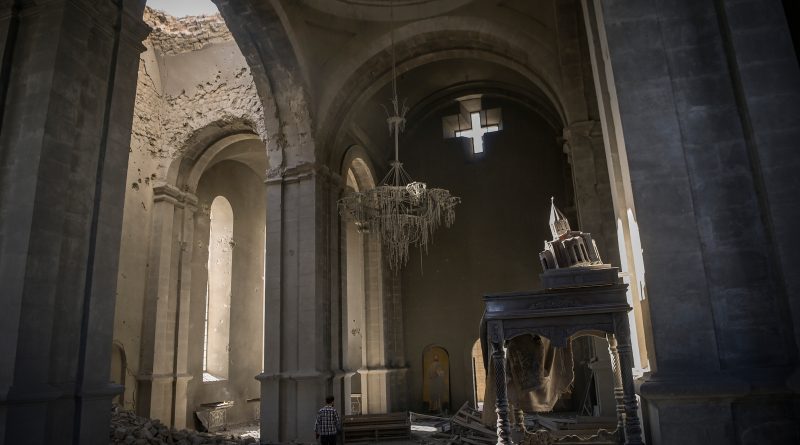 
When Alvina Nersisyan’s husband told her to lock up their apartment and drive their kids somewhere safe, she thought they’d be away for a couple of days—maybe a month at most. “I only took a few documents and my laptop,” the 39-year-old university lecturer says. “No valuables and no family photos, because none of us believed we wouldn’t be able to return.” That was almost two years ago, and she hasn’t been back since to her home in the city of Shushi in the disputed Nagorno-Karabakh region.

Known as Shushi to the Armenians who called it home, and Shusha to the Azerbaijanis who now control it, the cliffside city of a few thousand people has changed hands many times over the course of its history. Armenians had made up almost half of the population before their Azerbaijani neighbors drove them out and destroyed their part of the city in a 1920 pogrom. Amid the collapse of the Soviet Union, a brutal war from 1988-1994 saw Armenian forces capture virtually all of Nagorno-Karabakh, displacing around 600,000 Azerbaijanis in the region including over 90% of Shusha’s population. Most recently, in 2020, Azerbaijani forces pushed into the disputed region and Shushi fell on Nov. 8., prompting several thousand Armenians, like Nersisyan, to flee the city. Some 2,000 troops on both sides are believed to have been killed in the city alone.

“This will be a great day in our history,” said Azerbaijan’s strongman President Ilham Aliyev, following Shushi’s fall. Swaths of the wider Nagorno-Karabakh region were also handed over as part of a Moscow-brokered ceasefire deal penned in November 2020, leaving Armenians in control of around a third of the region.

Read More: Scenes from Behind the Frontlines of Europe’s Oldest ‘Frozen War’ in Nagorno-Karabakh

Azerbaijan is now looking to extend those dramatic wartime gains; in May 2021, Azerbaijan declared Shusha its “cultural capital” as part of a bid to cement control of both the city and the wider Nagorno-Karabakh region, where Armenians form a majority of the population. Now, dozens of events and conferences are being planned to paint the city as a hub for art, music, and learning. And throughout September, Azerbaijanis across the country and as far afield as Germany and France are celebrating what they say is the 270th anniversary of Shusha’s founding. “We have restored the territorial integrity of our country and national dignity by selflessly fighting and shedding blood,” Aliyev said, at the end of August.

But, given the city’s complex, multi-layered past, the celebrations and March declaration risks inflaming wider Armenian-Azerbaijani tensions.

In recent months, the city has become a hive of activity amid Azerbaijan’s plan to enshrine Shusha as its cultural capital. Two glitzy new hotels have been built for approved visitors—mainly official delegations and those Azerbaijanis privileged enough to pull strings and get hold of the government permits needed to visit, given that the military is still in charge of much of the region. Construction workers toil around the clock on floodlit building sites, putting up new apartment blocks and conference centers. “It’s very hard to forecast how much all the work here will cost,” says Emin Huseynov, the Special Representative of the President of the Republic of Azerbaijan in Nagorno-Karabakh. “It’s a massive project but there’s no doubt it will transform the region forever.” Most officials and experts TIME speaks to can’t put a dollar-sum on the construction blitz but agree it runs in the billions—a major undertaking despite Azerbaijan’s oil-rich economy.

Other parts of Shusha are more or less as they were when the shooting stopped two years ago. The Daniel Ghazaryan Music School in the city center, named after an Armenian composer born there in 1883, still has dusty footprints on the doors from where they were kicked in, and bricks are still piled up as they were when it was used as a firing post. The school’s gymnasium has been barricaded, and documents written in Armenian are strewn through the corridors. Dozens of Azerbaijani soldiers have daubed their names, hometowns, and unit numbers on classroom walls to celebrate their conquest. One message, written in red marker behind a shattered Soviet-era piano, reads “Shusha is ours.”

Between the shells of unlit buildings, a large white tent has been set up for attendees of a young Azerbaijani diaspora conference to watch soccer. Qarabağ FK, which is based in Azerbaijan’s capital, Baku, is playing, and a cheer goes up from the crowd when they score. Ihan, 22, who studies finance at the University of Warsaw in Poland, is among them. “This is my homeland,” he says. “It doesn’t matter how far away or if we change our passports—we belong to this land.”

One of the conference’s organizers, Gunel Atkinson-Nasibova, has traveled from France for the opportunity to be one of the first Azerbaijanis to see the city since the war. “It’s wonderful to see so many smart young people coming here to learn about our heritage,” she says, and hopes her own children will one day make the trip as well. Atkinson-Nasibova, like Ilhan, isn’t from Nagorno-Karabakh, but sees the region as a core part of her Azerbaijani national identity, even while living abroad.

On the city’s main Gazanchi street, plaques have been put up marking the former homes of major Azerbaijani cultural figures, such as Uzeyir Hajibeyov, who is touted as having in 1908 created the first opera in a Muslim-majority country. Hajibeyov is also one of those honored by three cast metal busts that dominate the central square, all of them peppered with holes from shelling or gunfire. The others are poet Khurshudbanu Natavan and opera singer Bulbul. Baku alleges the Armenians attempted to sell them off for scrap, a charge Yerevan has never acknowledged.

Since the 2020 war, Yerevan appears to have conceded it could have done more to protect that heritage, and Armenian Prime Minister Nikol Pashinyan raised eyebrows in November by describing it as a “sad, gray city” that never received the investment it deserved. “Did we need Shushi?” he asked, “and if so, why wasn’t it left in better condition?”

Despite Pashniyan’s comments, the city has a near-mythical status for Armenians, as it does for Azerbaijanis. “From the 1820s, Shushi became one of the major cultural centers for Eastern Armenians,” says Raffi Kortoshian, the co-director of the Research on Armenian Architecture foundation, who is based in Yerevan. “Now Azerbaijan is trying to neutralize that history from all the territory under its control.”

Since the war, dozens of reports have emerged of Armenian churches being razed and graveyards desecrated, as signs of their historic presence in the region are targeted. Videos have emerged online of Azerbaijani troops smashing up sculptures, while plans have been published to convert one chapel into a mosque.

In March, the European Parliament passed a motion that condemned Azerbaijan for “erasing and denying the Armenian cultural heritage in and around Nagorno-Karabakh,” which it assessed to be part of a “systematic, state-level policy of Armenophobia, historical revisionism and hatred towards Armenians.”

Baku, however, denies it is carrying out a campaign to obliterate any trace of Armenians living in the region. Ruslan Anvarli, who is in charge of cultural heritage protection for Azerbaijan’s Ministry of Culture, argues its officials are trying to reverse “the overall destruction caused during 30 years of occupation by Armenia” and “protect sites that require urgent intervention.”

Restoration work has already begun on Shusha’s mosques, which Anvarli says were allowed to fall into ruin over the past three decades. “We found this as you see it now,” says Farid, the supervisor of a crew working on the Ashaghi Govhar Agha mosque, pointing at its crumbling walls and missing minaret.

At the same time, the Ghazanchetsots Cathedral, which was the main place of worship for Armenians, has been fenced off and covered completely with scaffolding—virtually shielding it from view. It was bombed during the 2020 war by Azerbaijani forces while journalists and civilians sheltered inside, in what Human Rights Watch has described as a “possible war crime.” “No visitors are allowed because of construction work,” a Kalashinkov-carrying soldier outside tells TIME, but declines to explain why there are no workers or building machinery to be seen.

A man walks inside the damaged Ghazanchetsots (Holy Saviour) Cathedral in the historic city of Shusha, October 2020.

Azerbaijan has big plans to resettle Nagorno-Karabakh with its citizens who were displaced by fighting in the 1990s. Local officials say that Shusha will eventually have 30,000 residents, and the nearly 20,000 Azerbaijanis who lived there three decades ago will be first in line for new homes. At present, mainly Azerbaijani workers and their families live in the rubble-strewn city.

Mohubbet Samadov, 69, was one of the Azerbaijanis displaced from the areas surrounding Shusha in the 1990s. The agricultural worker says he has been living in squalid conditions as a refugee and dreaming of returning home. He went back to find his ruined village, Agali, on the first day after the ceasefire was signed in 2020. “I wouldn’t wish being displaced on anyone,” he adds, with a sigh, “and even if they were Armenians, I would try to help them if I could.”

Thousands of Armenians now find themselves in a similar situation to the one Samadov and other Azerbaijanis went through in the 1990s.

With both sides embroiled in a recent round of hostilities, the prospect of them working together to safeguard their shared heritage in the city seems slim. However, there are efforts to bring in international mediators that could help untangle the issue.

Elman Abdullayev, Azerbaijan’s permanent delegate to the U.N.’s cultural heritage agency, UNESCO, says that Baku would “welcome a mission from the organization to our territory as soon as possible.” According to him, that would help demonstrate “Azerbaijan is committed to preserving rich cultural heritage in this special place.” He says that such a move has previously been blocked by Yerevan.

In response, Gegham Stepanyan, the human rights ombudsman for the unrecognized majority-Armenian Republic of Artsakh in Nagorno-Karabakh, says that he would be open to an expert group visiting. “Work by a prestigious international organization like UNESCO could be a valuable step,” he says, “and it would have a deterrent effect in preventing further cases of vandalism.”

For Nersisyan, though, who now lives just down the mountainside in the Armenian-held city of Stepanakert in Nagorno-Karabakh, that history feels like it is already slipping away. “I can always find a new apartment to live in, so I don’t feel pity for myself. I feel it for the churches I can no longer enter. I feel pity for the ancient streets I can no longer walk on,” she says. “I can’t believe I won’t ever be able to go back.”