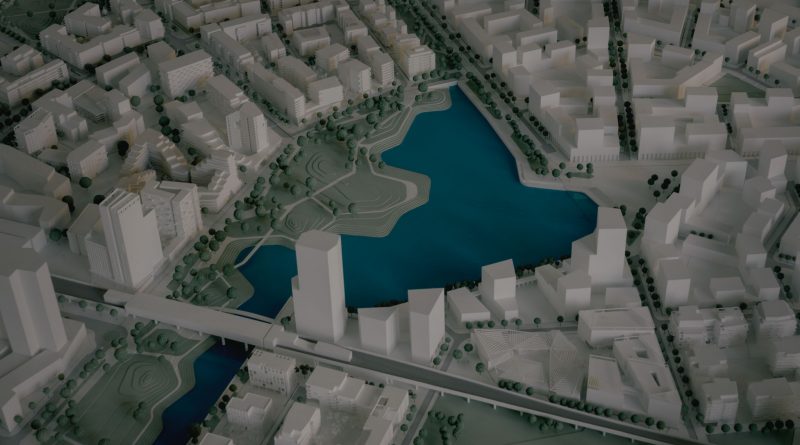 
By themselves, the young trees lining a still barren boulevard in Vienna’s newest neighborhood hardly look like climate warriors. Planted earlier in the year, the American ash and Bosnian maples were still scraggly enough by late July that they didn’t make a dent in the near-100º F temperatures. But as the visible part of the Austrian capital’s first “sponge city,” those trees, and the ingenious underground planters in which they grow, will soon play an important role in mitigating some of climate change’s worst effects.

Most cities today are not built to handle the kind of extreme weather that climate change inflicts. The asphalt and concrete that are the building blocks of the modern metropolis absorb heat, making heatwaves hotter. Those same materials, used to construct buildings and pave over the wetlands and streams that predated urban development, also repel water, leaving it nowhere to go. And that, as residents of Vienna, Berlin, and other European cities learned the hard way last year, can lead to devastating storm surges and flash floods.

Read More: Hurricane Ida Raises the Question: How Can Cities Keep Subways Safe in an Era of Climate Crisis Flooding?

Sponge cities provide one solution. Urban designer Yu Konjian first articulated the idea in 2012 after flooding wreaked havoc on dozens of cities in his native China. Instead of paving over the land with impermeable concrete and asphalt, he proposed adding green spaces that could act like sponges and absorb excess rain water. Instead of a “gray” infrastructure of pipes and dams that whisk water away from the city and dump it into rivers or the sea—systems that are prone to overflowing during storms and wearing out with time—sponge cities would use simple gravity to channel water steadily into soil where it could support plant life, or into reservoirs where it could be stored and repurposed. In other words, the sponge city would replicate the natural water cycle.

“It’s not about preventing flooding,” says Scott Hawken, director of the Landscape Architecture and Urban Design programs at the University of Adelaide in Australia. “It’s about working with water intelligently—letting it infiltrate—so flooding is less dangerous.”

A model of the “Seestadt Aspern” in Vienna, Austria.

Basketball and soccer courts, climbing facilities and playgrounds were built under the drawbridge in the “Am Seebogen” neighborhood in Vienna, Austria. Kids are seen playing together on Sept. 26, 2022.

Over the past decade, elements of the sponge city have been incorporated into metro regions around the globe. In China, where the central government adopted Yu Konjian’s ideas in 2013, the concept has been successfully tested in 30 municipalities, and the country now plans to adapt 80% of urban areas accordingly by 2030. In Copenhagen, a park in the central neighborhood of Vesterbro now has massive, rainwater-collecting reservoirs below a surface that functions as a pool with fountains when full, and ball courts and skateboarding ramps when the water recedes. Even industrial Pittsburgh has mitigated the worst of its flooding by installing rain gardens and a 535-foot-long “bioswale”—a trench lined with plants—that mimics a natural waterway and, through absorption, can prevent more than 800,000 gallons of stormwater from overflowing the city’s sewers.

Sponge cities can boost climate resiliency beyond just flood mitigation. In Australia, where the concept goes by the decidedly less evocative name of Water Sensitive Urban Design, sponge projects have proven effective in lessening the impact of flooding’s opposite—drought—by filtering and storing rainwater so that it can be used for irrigation and plumbing systems.

In Germany’s capital, sponge designs are being used to cool the air in some neighborhoods. One of the more ambitious projects recently got underway at the now decommissioned Tegel airport, which is being transformed into Berlin TXL, a three-square-mile development that, when complete, will feature a climate-resilient neighborhood, called the Schumacher Quarter, with room for 10,000 residents. In addition to its wooden buildings and alternative forms of transportation, the neighborhood will eschew conventional drainage in favor of ground-level gradations that will direct rainwater into swales or pools. Then, depending on where it falls, the water will be put to different purposes.

“It’s a little bit funny because in the community we will differentiate between public rain and private rain,” says Nicolas Novotny, head of planning and development for Tegel Projekt GMBH, which is overseeing the development. “Some of the rain that falls on public space will seep into the ground, and some will go into closed spaces so it can be retained and evaporate. Because with evaporation you get cooling effects.”

The rain that falls into private areas—namely on top of buildings—will either be held beneath green roofs, where it can play a similarly cooling role, or stored in courtyard pools where it will be repurposed in graywater plumbing used for toilets and lawn irrigation. Together, evaporation from both public and private areas will mean that the Schumacher Quartier stays cooler, Novotny says, than other areas in the center of Berlin. “It’ll act like natural air conditioning.”

A part of the sponge tree system in the “Am Seebogen” neighborhood.

Vienna’s sponge elements are also multifunctional. Created as part of a larger project called IBA_Wien that reimagines urban housing, Am Seebogen is a new neighborhood, located about 2.5 miles east of the city center, that already provides housing for some 6,500 residents and will eventually be home to 12,000 more. Built around a man-made lake created in 2009, it is designed both for environmental sustainability—buildings are constructed of wood, while ample public transportation and limited parking discourage cars—and liveability, with ample public spaces and local shops within easy walking distance. But achieving both those goals, along with climate resiliency, in a largely denuded landscape, is complicated, which is where those ingenious underground planters come in.

At street level, they look like normal planting beds, holding trees flocked with low-lying plants. But beneath the foliage is a substrate of sand and biochar (a form of charcoal made from organic material) and below that, storage chambers filled with gravel that capture heavy rainfall, filter it of road salt and other chemicals, and store about 80 gallons of the cleaned water so that it’s available to the tree’s roots. The structures not only provide a place for the water to go, in other words, but help trees in the neighborhood thrive in an urban environment. “Trees in cities always look so bad because of compaction,” says Oliver Gachowetz, whose landscape architecture firm 3.0 designed the sponge planters. “The soil gets compacted by dryness and traffic. For us, it would be like having a 200 kilo [440 lb] person sitting on your chest—you can’t breathe. But these leave [the trees] room to spread out their roots.”

Trees matter to Am Seebogen’s environmental vision because they prevent erosion, sequester carbon, and foster biodiversity. But they also help make the area more appealing to humans. In a few years, when the 330 trees planted are large enough to cast shade, they’ll make the neighborhood a cooler—and nicer—place to live. “Trees help people stay in the public space,” says Kurt Hofstetter, IBA_Wien’s coordinator.

Implementing sponge design into urban environments isn’t cheap; one Chinese study estimated the cost at $15 to $22 million per square meter. And while some proponents make the point that incorporating sponge design into new developments can often be less expensive than putting in conventional sewer systems, that doesn’t apply to installing that infrastructure in already built environments.

Even so, some cities are beginning to recognize they may not have a choice. “We used to get storm flooding once every two to five years,” says Zsofia Hamza, who is heading up a proposed sponge design project called LIFE in Runoff for Hegyvidék, a suburban district of Budapest. “Now it happens two or three times a year.”

A scene in the “Am Seebogen” neighborhood.

But that’s just part of a more ambitious effort to convert the entire city to sponge design. In addition to flooding, the Hungarian capital also suffers frequently from drought, and seasonal levels of the Danube River, which runs through the center of the city and provides much of its water, have been falling for some time. So the municipal government plans to expand the Hegyvidék project city-wide.

In May, a delegation from Budapest traveled to Vienna to study the Am Seebogen project, and came away with something of a reality check on its ambitions to become a full-on sponge city. “The most interesting thing for us was the lesson that the nature-based solutions are not solely nature based,” says Orsolya Barsi, deputy head of the department of climate and environment for the Hungarian capital. “Everybody talks about nature-based solutions as a kind of magic wand, but in an urban environment you still need gray infrastructure to support the green.”

In other words, effective climate resilience urban design is, like nature itself, necessarily complex. “Sponge cities aren’t just about one thing like storm water or trees or cooling things down,” says Am Seebogen’s Ganchowitz. “They’re about interconnections.”