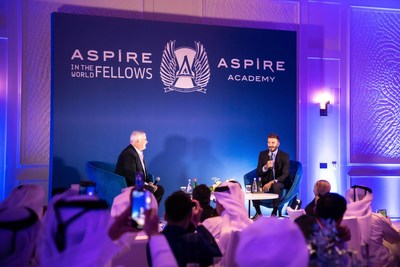 
DOHA, Qatar, Oct. 4, 2022 /PRNewswire/ — The first day of the Aspire Academy Global Summit 2022 (AAGS) in collaboration with FIFA concluded with a gala dinner, where the FIFA President Gianni Infantino addressed the delegates praising the work being done at the 8th edition of the AAGS.

The evening featured a ‘Star Chat’ with former England captain David Beckham who talked about the impact of the Aspire Academy on the legacy of Qatar hosting the 2022 World Cup. His thoughts came after a day of inspiring talks at Aspire Academy where delegates from the 32 nations qualified for the World Cup finals and members of the Aspire in the World Fellows discussed topics ranging from youth development to use of data.

During his welcoming remarks Mr. Infantino said, “The work that you’re doing is exactly what makes us, the fans of the game, feel this incredible emotion when we see the skills of the young players,” he said.

“We get to see all the players, that you have trained and the performance that we all see and admire the football pitch. It touches our emotions; it touches our hearts.”

“It makes them cry, making them celebrate, and making all of us fall in love with a beautiful sport.”

In his Star Chat Mr. Beckham talked about the legacy of Qatar hosting the 2022 World Cup and the power of football as a uniting force.

“You only have to look at Aspire. That’s a legacy,” he said.

“You want to inspire the next generations, to want to play this game. And it’s not just about becoming a professional; it’s about investing into wellness, into health, into the future of not just Qatar but the region too. It’s about the next generation of footballers, or sport stars, or just people who want to be healthy and enjoy sports.”

Several of the points made by Mr. Beckham and others were built upon on the second day of the AAGS.

The first Star Chat on the second day was with two-time Women’s World Cup winning coach Jill Ellis, who is now the president of the San Diego Wave club in the USA. She explained one of the most important things for her is trying to be better every day and that failure can help in the process.

She pointed out that after winning the 2015 Women’s World Cup the USA failed to impress at the 2016 Olympics. However, despite that failure three years later, they retained their global title. She explained that after identifying the areas that needed improving, they looked for players who could help solve those problems not immediately but ready for 2019. Ms. Ellis also highlighted the role of the team’s sports scientists and psychologists in helping her squad achieved success.

The second ‘Star Chat’ of the day was with France 1998 World Cup winner Youri Djorkaeff who predicted an interesting World Cup in Qatar.

“Coming halfway through the season will make it different,” he explained.

“Playing tournament football is a different story from club football.”

He encouraged young players to follow their dreams recalling that at the age of 12 he wrote an essay at school about wanting to win the World Cup – the day after he achieved that dream in 1998 his teacher sent him back that very same school report and saying she had believed in him.

The two-day event sessions concluded with the delegates sharing the outcomes of the three technical workshops: making an impact with data, preparing players and team for the competition, and optimizing the recovery strategies.

The delegates’ final session saw them share a range of recommendations from their discussions in the three areas: