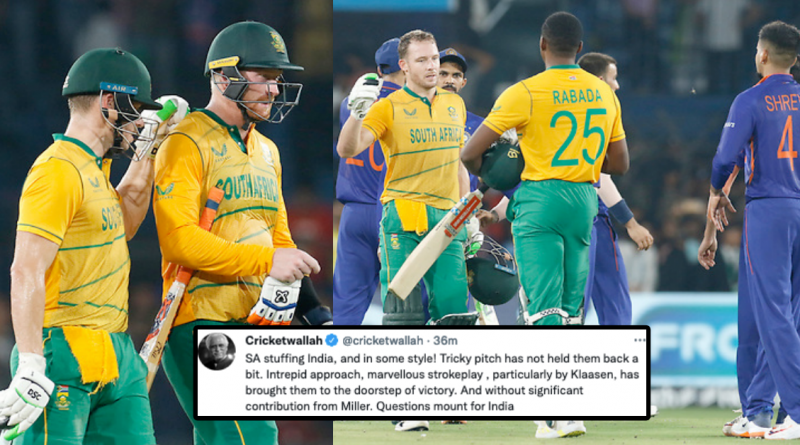 South Africa won the second match of the five-match T20 International (T20I) series against India by 4 wickets to get a 2-0 lead in the series. This was South Africa’s 7th consecutive win over India in international cricket across formats.

Kagiso Rabada opened the attack for South Africa against young India openers – Ishan Kishan and Ruturaj Gaikwad – and dismissed Gaikwad for 1 on the 5th delivery of the over.

After losing Gaikwad, Ishan Kishan and Shreyas Iyer batted decently in the next 5 overs and at the end of the powerplay, India were at 41/1.

On the 4th ball of the 7th over, Anrich Nortje cleaned up Kishan with a bouncer and the young opener got out after scoring 34 runs off 21 balls, including 2 fours and 3 sixes. Left-arm spinner Keshav Maharaj got the big wicket of Indian captain Rishabh Pant for 5 in the 10th over.

In the 13th over Hardik Pandya was castled by Wayne Parnell for 9 and in the 14th over Shreyas Iyer was dismissed by Dwaine Pretorius for the second time in the series and he scored 40 runs off 35 balls, including 2 fours and 2 sixes. Axar Patel was also castled by Anrich Nortje for 10 in the 17th over.

Chasing the target, Reeza Hendricks was cleaned up by Bhuvneshwar Kumar in the first over itself. Then the veteran pacer Bhuvneshwar dismissed Dwaine Pretorius and Rassie van der Dussen in the 3rd and 6th over and at the end of the powerplay, South Africa were at 29/3.

Then, Heinrich Klaasen and Temba Bavuma had a 64-run partnership before Yuzvendra Chahal dismissed the latter in the 13th over.

Heinrich Klaasen played the knock of 81 runs off 46 balls, including 7 four and 5 sixes and in the end, David Miller provided the finishing touches to help South Africa seal the victory.

SA stuffing India, and in some style! Tricky pitch has not held them back a bit. Intrepid approach, marvellous strokeplay , particularly by Klaasen, has brought them to the doorstep of victory. And without significant contribution from Miller. Questions mount for India

#INDvSA #India
when someone says we have a star studded squad
me: pic.twitter.com/qyA9O24nVm

Winning bilateral series isn’t as easy as this duo made it look 💔🥺#INDvSA pic.twitter.com/1OE7qd764H

Bhuvi opened the doors for a fight with 3️⃣ wickets in the powerplay, but Heinrich Klaasen (81 off 46) just took the game away from #TeamIndia with a blitz 😯

Down, but not out.

Time to regroup and come back stronger on 14th June 💪🏻#INDvSA #SaddaPunjab pic.twitter.com/Co3b0jVo2E

South Africa have defeated India to lead the series by 2-0.

Pant is probably one of those captains who come prepared with “DK will not come out before 16 overs,” “Bhuvi will bowl three upfront, the other as late as possible,” etc, and stick to them irrespective of what happens.

I guess I was pretty wrong 😂

Winning was not easy, but this man made it easy🔥Bow down to the Captain Rohit Sharma❤️
Ict needs you @ImRo45 comeback@BCCI #INDvSA pic.twitter.com/b2eEtpu3Re

Brilliant spell by Bhuvi. Always a delight to watch him bowl like this. Unfortunately the result had not gone our way 😔 #INDvSA

After the great #captaincy of#RishabhPant
I looked at @BCCI ,,😁😁😆😆 pic.twitter.com/mcGeqGlUTi

Klassen smashed Yuzi & Chahal even when they were creating havoc in SA in 2018. Not surprised that he’s played spin well today. Looks like someone who picks the ball from the hand.

What David Miller can do, Klaasen can do too, and adds tax. Here for it. #INDvSA pic.twitter.com/LllTvLgS0K

Also Read: IND vs SA: Watch – Rishabh Pant Holes Out In Deep In Trying To Go After Keshav Maharaj