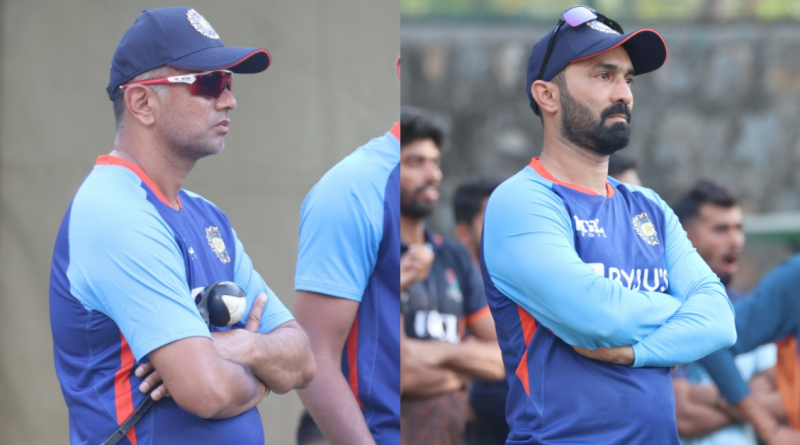 
Dinesh Karthik has been recalled to the Indian team for the five-match T20I series against South Africa after a three-year absence. Karthik’s return to the Indian side follows an outstanding season with the bat for the Royal Challengers Bangalore (RCB) in the Indian Premier League in 2022. (IPL).

The wicket-keeper hitter excelled in the role of ‘finisher’ for the Faf du Plessis-led side, scoring 330 runs at an average of 55 and a strike rate of 183.00 in 16 matches. The selectors did not overlook Karthik’s achievements, and with the 2022 T20 World Cup approaching, Karthik is back in the picture for the Men in Blue.

At The Backend Of The Game, Dinesh Karthik Can Make A Difference: Rahul Dravid

Rahul Dravid, Team India’s head coach, stated that the team management expects Karthik to have the same impact on the international stage as he did for RCB in the IPL 2022. In the slog overs, Dravid praised the senior cricketer as someone who can make a difference.

“With Dinesh, it is clear with the role. At the backend of the game, he can make a difference. That’s why he has been picked, to bat in those positions and deliver for India as well”, Dravid was quoted as saying by Times Now.

Karthik’s last appearance for India was in a semi-final loss to New Zealand in the 2019 Cricket World Cup. In February 2019, he last played a T20I against Australia in Bengaluru. In 2006, Karthik was a member of India’s playing XI in the first-ever Twenty20 International against South Africa. He was also a member of MS Dhoni’s Indian T20 World Cup-winning team in 2007.

The five-match T20I series will begin at the Arun Jaitley Stadium in Delhi on Thursday (June 9). The following matches will be held at Cuttack, Vizag, Rajkot, and Bengaluru before the Indian team travels to Ireland and England.

Also Read: IND VS SA: It Is Brilliant In Terms of Watching Umran Malik In The Nets: Rahul Dravid