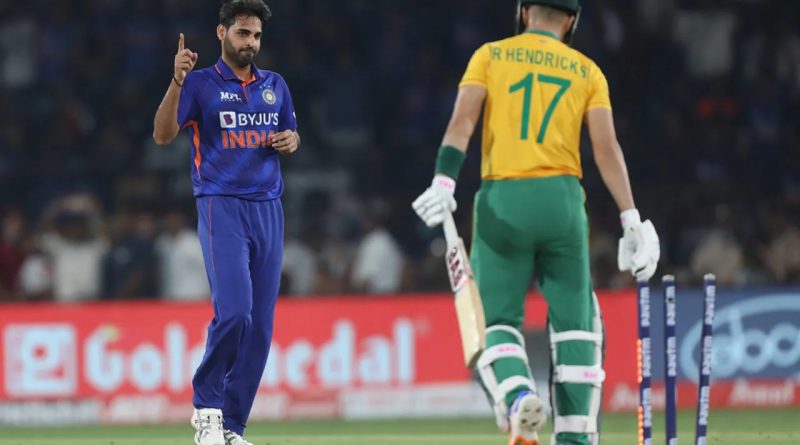 Bhuvneshwar ran through the visitors’ batting unit upfront in their chase of a moderate 149 on a tricky surface. Bhuvneshwar claimed three early wickets to reduce Proteas to 29 for three in the Powerplay overs.

IND vs SA: Bhuvneshwar Kumar bowled a sensational spell of 4/13

South African opener Reeza Hendricks failed to pick an inswinging delivery, that was kept a tad low, by the Indian pacer, and crashed into the stumps after getting an inside edge. Bhuvneshwar used the knuckleball to get rid of Dwaine Pretorius, who played a handy cameo in the first T20I.

The Indian bowling spearhead reserved his best delivery of the day for Rassie van der Dussen, a back-of-the-length delivery, which nipped back in and uprooted the stumps. Bhuvneshwar also cleaned up Wayne Parnell later in the chase but his stupendous spell of 4/13 went in vain as the visitors rode on the brilliance of Heinrich Klaasen.

Klaasen scored 81 from 46 balls, including seven fours and five sixes at a strike rate of 176.09 as South Africa chase the target with 10 balls to spare and took a 2-0 lead in the five-match series.

Bhuvneshwar Kumar is doing what he’s famous for: Wasim Jaffer

Jaffer said Bhuvneshwar’s return to form is a major boost for India’s bowling unit in the T20 World Cup. The former Indian cricketer also noted that Bhuvneshwar’s absence from the red-ball side will push him to focus on improving his skills in the shortest format.

“This is a good thing for Indian selectors that with the World Cup coming, you have Mohammed Shami, Bhuvneshwar Kumar, Jasprit Bumrah – a lot of new-ball options.

“Bhuvneshwar Kumar is doing what he’s famous for – making the ball swing, bowling at a good length and attacking the stumps. He has bowled very smartly,” Jaffer said on ESPNcricinfo.

“He would have observed what’s more difficult to play on the pitch during India’s innings, so pitched the ball at the 6-8m mark and brought the ball in which got him the wickets.

“It shows his experience and confidence gained by playing for so long. He knows selectors aren’t considering him for Tests and he’s playing just white-ball cricket. He’s a shrewd operator who knows what to bowl at which pitch and it’s very, very nice to see,” he added.

In the second T20I, Bhuvneshwar surpassed off-spinner Ravichandran Ashwin to become India’s third most wicket-taker in T20 Internationals. Bhuvneshwar’s 4/13 helped him to amass 63 scalps in 61 games and is behind Jasprit Bumrah (67) and Yuzvendra Chahal (70).