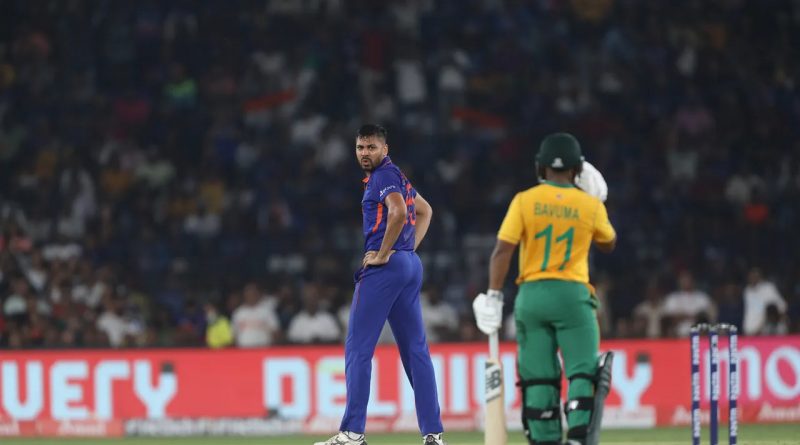 
Former Indian cricketer Parthiv Patel is of the opinion that left-arm pace bowler Arshdeep Singh will replace Avesh Khan in the Indian team for the third T20I against South Africa in Visakhapatnam.

The Rishabh Pant-led side is on the brink of a series loss after suffering back-to-back defeats in the first two fixtures and remains in a must-win situation if at all they aim to come from behind to clinch the five-match series.

Despite Indian pacer Bhuvneshwar Kumar‘s efforts to restrict the visitors at 29 for three in the Powerplay overs in the second T20I, Heinrich Klaasen (81 from 46 balls) turned the game on his head with a masterclass batting display, targeting the Indian spinners in the middle.

Avesh has performed decently for the Indian team in the first two games, started the series conceding 15 runs in the first over but came back stronger with 20 runs in the next three runs in Delhi. In the second T20I in Cuttack, the 25-year-old pacer gave just 17 runs from three overs, albeit, didn’t pick any wickets in the two matches.

Arshdeep Singh is a good option since he gives you variety as a left-arm bowler: Parthiv Patel

Parthiv believes Avesh will be the player to make place for Arshdeep’s international debut in the third T20I. The former Indian player expects Arshdeep to form a potent combination with Harshal Patel in the slog overs.

“Avesh Khan will likely be the bowler who will have to make way for Arshdeep. But, if you think about it, Avesh Khan has not done anything that should get him dropped. Sometimes, the low-hanging fruit is targeted once a team loses a match,” Parthiv said on Cricbuzz.

“Every player in the squad deserves their place, they have played good cricket to get here. Arshdeep is a good option since he gives you variety as a left-arm bowler. You will get two specialist death bowlers at death in Harshal Patel and Arshdeep Singh. It will be easier for the captain as well. He can give more overs to Axar and Chahal in the middle overs,” he added.

India will play South Africa in the third T20I on Tuesday (June 14) at the ACA-VDCA Cricket Stadium in Visakhapatnam.

Also Read: IND vs SA: He Has Conceded A Lot Of Runs In This Series – Aakash Chopra Says Of Yuzvendra Chahal Ahead Of The Third T20I