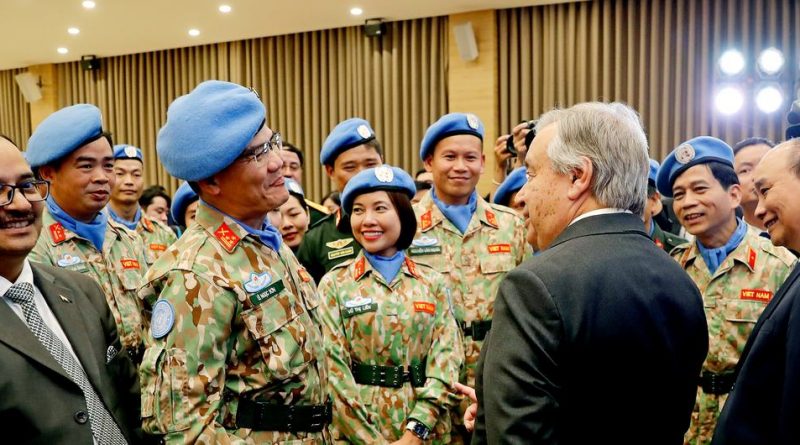 
Mr. Guterres was in the country to take part in a ceremony to commemorate the 45th anniversary of its membership in the UN.

On Saturday, the UN chief spoke at Viet Nam’s Meteorological and Hydrological Administration in the capital, Hanoi, where he highlighted the critical role of disaster preparedness for all governments.

The goal is to have early warning systems in all countries within five years, “to end the tragedy of people dying, livelihoods being destroyed, because people did not know that tragedy was unfolding,” he said.

Mr. Guterres will launch an action plan at the COP27 UN climate conference in Egypt next month to make the five-year deadline a reality.

The country’s agricultural and industrial heartland is among the most vulnerable places in the world, as it is exposed to rising sea levels, saltwater intrusion, flooding and changing rainfall intensity.

He said efforts to protect the Mekong Delta were not only important for Viet Nam but could be shared with other nations around the world.

The Secretary-General also participated in a dialogue with Vietnamese youth representatives and UN peacekeepers from the country, held at the Academy of Diplomacy under the theme of ‘Innovation and Participation for an Inclusive and Sustainable Future.’

He stressed that solidarity is the only way to overcome the climate crisis and other current or emerging global challenges.

“We face the risk of new pandemics.  We face climate change and inequality in the world. There is only one way to be able not to be defeated by these challenges, and that is if we join efforts, if we come together. And for that we need to feel true solidarity.”

Later that day, the Secretary-General also posted a message on Twitter to all young people worldwide, urging them not to give up hope.

“You can count on me to amplify your ideas (and) support your efforts to build a better, fairer, more sustainable world for all,” he wrote.

The Secretary-General arrived in Viet Nam on Friday and participated in the ceremony celebrating its 45 years as a UN Member State.

He praised the country’s strong partnership with the UN, and its “remarkable journey” during this period, which he described as a story of transformation and hope, written by the Vietnamese people.

“Little more than a generation ago, United Nations staff were in Viet Nam delivering food aid to a country ravaged by war, isolated, and on the brink of famine,” he recalled.

“Today, it is Vietnamese peacekeepers coming to the aid of people in some of the most desperate parts of the world.”

Vietnamese “blue helmets” are serving in countries such as the Central African Republic, he said, risking their lives to bring peace and hope to people there, as well as the chance for a better life.

The country also provides double the global average of women peacekeepers serving under the UN flag.

With the world in peril due to the COVID-19 pandemic and the impacts of the war in Ukraine, Mr. Guterres also addressed the need for justice, as well as greater solidarity and cooperation.

“And nowhere do we need it more – and more urgently – than in our fight against the climate crisis,” he said.

The UN chief emphasized that action on loss and damage is a moral imperative that must be front and centre at COP27.

Mr. Guterres was in the region for five days.

Prior to Viet Nam, he visited India, where he participated in a ceremony to mark the country’s 75th anniversary of independence, among other events.

He also travelled to the country’s first solar-powered village and saw how green energy is changing the lives of residents.