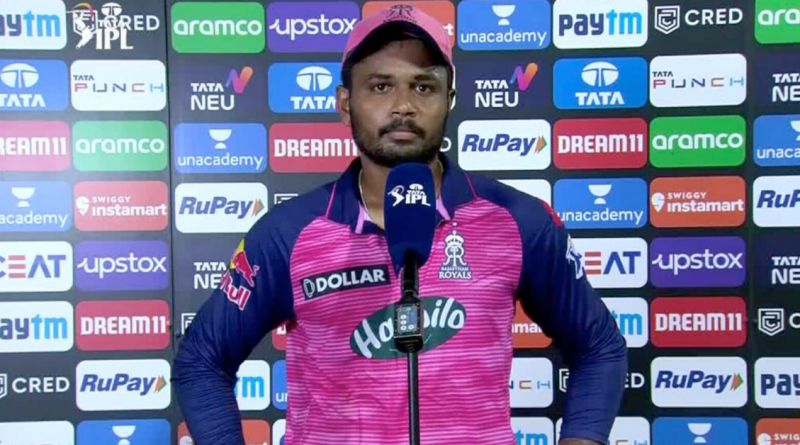 
RR captain Sanju Samson lamented the loss of early wickets in a difficult chase of 193 runs against GT in their recent most IPL 2022 clash at the DY Patil Stadium in Navi Mumbai on April 14, 2022. Rajasthan Royals bowled first after Samson won the toss and Gujarat Titans were invited to bat.

The match was kind of a one-sided affair as Hardik Pandya and co completely outplayed Sanju Samson and his men and went to the top of the IPL 2022 points table. Batting first, Gujarat Titans made 192/4 with skipper Hardik Pandya slamming 87* in 52 balls with 8 fours and 4 sixes.

In reply, Gujarat Titans were the first to gain advantage as Devdutt Padikkal got out for a golden duck, while Ravichandran Ashwin, who was promoted to no.3 spot, contributed just 8 runs. Jos Buttler recaptured his Orange Cap as he smoked 54 runs in 24 balls only with 8 fours and 3 sixes.

But after he got out, RR lost a slew of wickets as Rassie van der Dussen (6) and captain Sanju Samson (11) fell quickly. Shimron Hetmyer made 29 and there were some contributions from Riyan Parag and Jimmy Neesham, but RR could only manage 155/9 in 20 overs.

Lockie Ferguson and Yash Dayal both took three wickets each as Gujarat Titans went to the top of the IPL 2022 points table with a 37-run win.

I Would Like To Give Credit To Their Batters. Hardik Played A Very Good Innings: Sanju Samson

Sanju Samson cut a sad figure during the after-match presentation as he discussed the result. He felt that GT got 15 runs more than they should have and had RR kept wickets in hand, the total was not a huge one and could have been overhauled.

“You can say that (if Gurajat got 10-15 extra runs). But I would like to give credit to their batters. Hardik played a very good innings, they played really well to get that score. If we had wickets in hand this was chasable I feel. We were almost there in terms of run rate, in the powerplay we had a better run rate actually, But we kept losing wickets. Freaky niggle last night in training, definitely missed him (Boult). Hopefully he will be back soon.

He (Hardik) had a really good day today, batted, bowled and fielded well. I have played enough number of years in this league to understand that each game is crucial. Very important to learn and comeback stronger in the next game. I was doing No. 3 continuously till last season.

So we decided to have that flexibility, come down at No. 4 or 5 or wherever the team needs me. Having someone like R Ashwin allows us to do that, Devdutt Padikkal batted 3 in the first three games. So it all depends on the combination we are playing,” Sanju Samson was quoted by Cricbuzz.