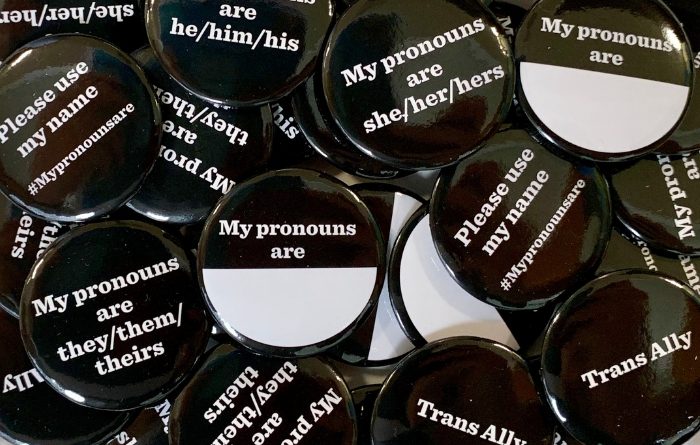 An anti-vax crusader who attacked “freaks” for “invent[ing] fictional pronouns like hij/hem” was shocked to discover that he’d taken issue with… the Dutch for “he/him”.

On Wednesday (21 July), a man named Dave decided to take a break from using his Twitter account to rally against COVID vaccines, and instead began mocking trans people.

When non-binary YouTuber Caelan Conrad tweeted about a tool to block transphobes online, Dave somehow stumbled across it and replied: “So… silence anyone with views you don’t agree with? Censorship? Cuz that always works out well, right?

“The answer is NO, btw. Never. And stop propagating invented bullshit like ‘TERF’. If you’re going to invent your own language get your own island.”

When another Twitter user tried to explain to Dave that “blocking someone isn’t silencing them”, and that people’s differences are not “ever resolved on Twitter”, Dave lashed out.

Referencing the user’s pronouns in their Twitter bio, he wrote: “I mean, you freaks invent fictional pronouns like hij/ hem, so… y’know. It’s difficult to converse with the patently insane. Seek therapy. Or a better therapist.”

Dave clearly thought he had performed an epic mic-drop, but hilarity ensued when another person pointed out he’d accidentally rallied against the gender binary belief, writing: “Hij/ hem is Dutch for he/ him LMAO.”

Absolutely fucking dying at this pic.twitter.com/z0JPUujSsS

Dave swiftly deleted his tweet, and responded: “LOL Is that so? My bad, then!”

It seems like in reality you don’t hate LGBT people, you hate the dutch

LOL! Your bad! It’s like this part never happened! pic.twitter.com/MxXLkYGQ4j

He offered no apology for apparently calling those who use pronouns other than he or she “freaks” who need to “seek therapy”.

As Twitter relentlessly mocked him, Dave complained he was being “bullied” and “attacked”, and declared: “‘My bad’ for not knowing that he’d posted he/him in Dutch.”

Despite literally having tried to “police” a stranger’s pronouns, he continued: “I stand by ‘freaks’ in regards to the pronoun-police and those who use anything other than he/him or she/her. Because it’s ‘insane’. ‘Therapy’ is not offensive.”

If there weren’t enough levels of irony to the situation, the cherry on top came when Dave then began blocking everyone who criticised him.

Conservative “thought” in action, a triptich.

By his own logic, he’s silencing me! Oh no! pic.twitter.com/6mMAE4h1kf

HE BLOCKED ME LMAO

What happened to “blocking everyone I disagree with not leading to the resolution of differences” pic.twitter.com/LTqgj5QIKp