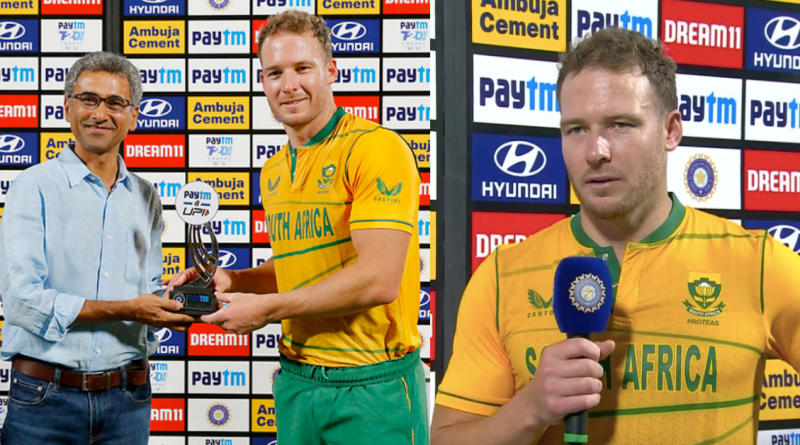 
India’s first-choice players were unavailable. Rohit Sharma, Virat Kohli, and Jasprit Bumrah have all been rested for the series. KL Rahul and Kuldeep Yadav were both injured just one day before the series began.

As a result, Rishabh Pant was tasked with leading India.

In the first innings, India amassed a mammoth 211 runs. SA also got off to a good start, with Temba Bavuma taking on Avesh Khan in his first over. They eventually chased down the target with 5 balls to spare courtesy of a brilliant inning by David Miller.

I Am open To Bat Anywhere: David Miller

Temba Bavuma was removed by Bhuvneshwar Kumar. Then, after being elevated up the order, Dwaine Pretorius went after India’s bowlers. With only 13 balls, he sped to a score of 29. Harshal Patel, however, bowled him out with a stunning slower ball. Then David Miller and Rassie van der Dussen added another 130 runs to help SA cross the finish line.

The Proteas won with an undefeated 131-run partnership off only 63 balls between the two batters. After the powerplay, the visitors were put under pressure. RvD’s playback of dots after dots raised the pressure even more. On the other hand, nothing could stop Miller. Smacked a 22-ball fifty to continue his excellent form. He scored 64 off 31 balls and that just took the game away from India.

After the game, Miller said, “Obviously a lot of hard work over the last few years understanding my game. Rassie played so well at the back end. Just try and hang in there was the chat. He was trying to go but he wasn’t getting it. Just about waiting for that loose ball. Belief. Understanding winning more games and more consistency gives you more belief. I am pretty open to bat anywhere. Just want to make a difference.

SA would hope that Miller can continue the same form throughout the series.