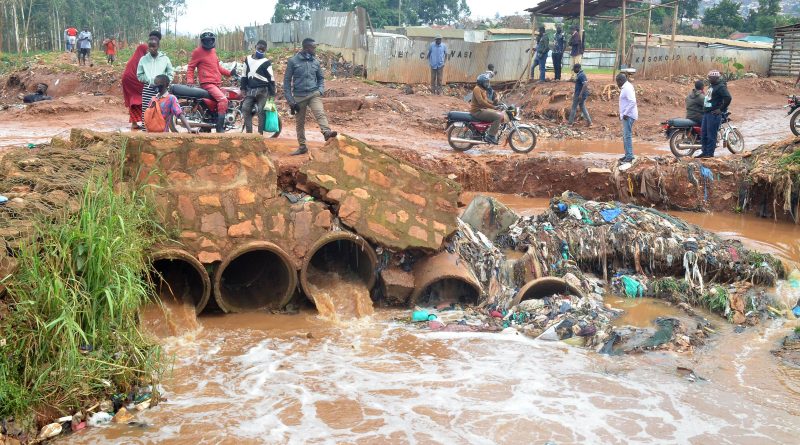 
I was 10 years old in 2008 when flash flooding displaced 400 people, including my family, from the Butaleja District of Eastern Uganda—a region where illegal sand mining along riverbanks has exacerbated flooding already made worse by climate change. We lost our farm and home, so we moved over 130 miles away to the village of Luzira in Kampala, Uganda’s capital city, where we knew only one person, my maternal grandma, who we lived with.

But her home quickly became too crowded and we had to move to a one-room rental—much smaller and less beautiful than our old home. My mother raised my siblings and I after our father left us soon after moving. She often struggled to find enough food or money to pay for rent and our school fees. I can’t count how many times we went to sleep hungry because we couldn’t afford food. Back on our farm, we had plenty to eat.

And we still couldn’t escape the impacts of climate change. It was a common occurrence for us to return home from school to discover our clothes, utensils, and other belongings strewn about inside the house in flood water. I’ll never forget one night in November 2014. I was a teenager and old enough to fully grasp the reality of what was happening—and had been happening for years at that point. It began to rain, the power went out, and water flooded our room. My mother woke me up, and told me to grab as much of our clothes and books as possible and get out —meanwhile, she carried my siblings out of the house. We stood outside all night with only a phone for light as the water damaged our home. The next morning, we went to our grandmother’s house where it was safer. We lived there for about four months until my mom could afford to rent a new home nearby.

It took me a while to figure out what was causing the flooding. But then, on a rainy day, around the time I was 16, I saw several neighbors dumping garbage, including plastic bottles, into the already-overwhelmed drainage network. The combination of trash and flooding clogged the entire system.

People stand on a damaged bridge in the wake of flood triggered by heavy rain in Kampala, Uganda, Aug. 9, 2021.

When I asked them, “Why are you doing this?” One person replied, “We can’t burn this rubbish and the company we pay to come and collect this garbage is no longer coming. We tried to ask the government to help us. No one is listening to us so what can we do? Why don’t we use this rain to take this rubbish away?” I was speechless in that moment, but I recognized that someone—maybe me—needed to speak up for environmental protection in Kampala.

I always dreamed of being a humanitarian or a news editor, but struggled to complete my education. Then, in 2016 I got a scholarship to study computer maintenance, and eventually earned an undergraduate diploma in IT and computer science at Muteesa I Royal University in 2019. But I didn’t have a job lined up after graduating, and I ended up spending a lot of time at home in Luzira watching television—I had spent many days indoors watching TV ever since the floods forced us to move away from my friends.

One day, I saw a news report about a Ugandan girl standing in front of our parliament, demanding our government declare a climate emergency. Her action may not have forced Uganda to go green, but it did change the course of my life.

Her name was Vanessa Nakate—today she’s known around the world for her climate activism, but at that time she was just getting started. I rushed to Facebook to find her; luckily, she was on my friend list. I messaged her, and soon after we met up in Kampala and talked about climate change, and its consequences.

The conversation made me see my family’s experience in a new light, and prompted me to get off the couch and try to make a difference. I soon joined her social media team, and in October 2019, I went on my first climate strike with my sister Kimberlyn. Since then, I’ve never left the frontlines.

In June 2020, I started my own nonprofit, Earth Volunteers, which aims to unite young people passionate about climate justice. Working with teams of volunteers, we have since planted 48,000 trees to help preserve 17 Uganda forest reserves.

But being an activist hasn’t been easy. In September 2020, my Twitter account was frozen. It’s not clear what caused my account to disappear—Twitter said it got caught in spam filters—but I’ve always thought it was connected to me speaking out against my government’s decision to sell one of our forests to a sugar company. And last year I was arrested for protesting against climate change in the streets of Kampala. Police accused me of inciting violence because the protest took place after the January 2021 presidential election—a process marred with violence and accusations of vote rigging. My phone was confiscated and I was brutalized. But none of this has stopped me from mobilizing and organizing climate actions.

These days, my nonprofit is working to get climate resources, like textbooks, to teachers and students across the country, and collaborating with translators to ensure these books are accessible in local languages that everyone can read. Students must be part of the solution. Our goal is for every child in Uganda to have access to climate education by 2030.

That knowledge is essential: I believe my father would not have abandoned us if he had known why those floods back in 2008 hit, and what to do about them when they did. We had no help or compensation for our losses when the floods destroyed our home. That is why we are still struggling with life. To this day my family still lives in a one-room home. I’ve wanted to go back to my old village many times, but people there are now living in a swamp. This doesn’t need to be the story for the rest of the global south.