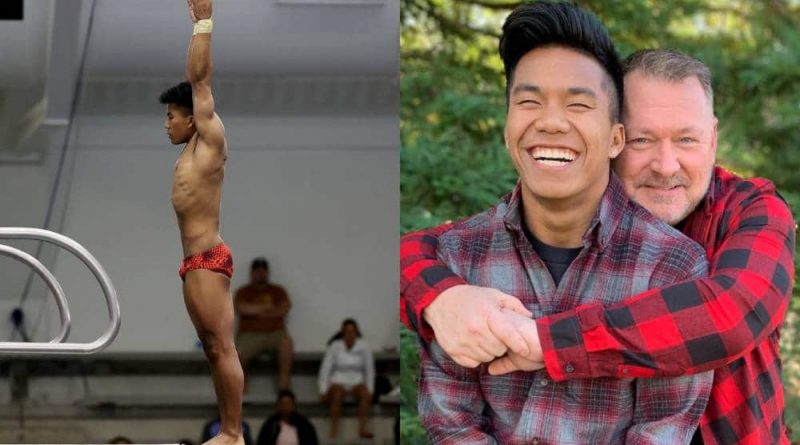 Olympian Jordan Windle says he dives “purely for my dad”, Jerry, and “how much he loves watching me”. (Getty/Dylan Buell/Instagram/@jordanpiseywindle)

American diver Jordan Windle has paid a touching tribute to his single, gay dad ahead of his debut at the 2020 Tokyo Olympic games.

The seven-time senior national champion and six-time junior national individual champion diver is making his Olympic debut Friday (6 August). While the 22-year-old is competing in Tokyo, he will be thinking of his dad, who is cheering him on from the US.

The Cambodian-born Olympian opened up about the close relationship he has with his gay, adopted father, Jerry, in an interview with Today. Jordan said that he had dedicated his career to making his dad as proud as possible.

“I tell everyone, when they ask me why I dive, I dive purely for my dad and how much he loves watching me,” Jordan said.

He continued: “Without him making all the sacrifices that he has, and his love and support the whole time we’ve been together, I really wouldn’t be where I am today.

“I have him to thank for everything, all my accomplishments.

“It’s been an amazing journey with him, and we’re still rolling.”

Jerry told Today that he didn’t think he would become a father as a single, gay man in the 1990s. But he stumbled on a magazine that had a story about a man who adopted a child from Cambodia, and it “didn’t mention a mother”.

Months after starting his search, he was in Cambodia, holding a sick Jordan in his arms. The young boy had been placed in an orphanage at the age of one after both of his biological parents died when he was just a baby. He was adopted a few months later by Jerry, who nursed him back to health.

With Jerry’s love and support, the young Jordan got better and began to thrive in his new home in the US. Jerry also encouraged his young son to follow his passion for diving.

Decades later, Jordan will now compete as part of the men’s diving team for the Tokyo Olympics. While he can’t be physically present for his son, Jerry said he will be watching his son perform on the global stage from back home in the US.

“It’s disappointing, but at the same time, this is Jordan’s journey, and this is the pinnacle of it,” Jerry told Today. “And I want him to enjoy this experience as best as he can.”

In a previous interview with Queerty, the gay dad shared that he has faced “some people” who believed a “gay person” couldn’t raise a “well-balanced, mentally healthy child”. He defiantly said his relationship with his son is “proof that that assumption is purely wrong and is a fallacy”.

“Jordan is a humble, kind, generous, and nurturing human being who knows and believes all humans are created equal and every human being deserves to be happy, to love and be loved unconditionally – PERIOD,” Jerry gushed.