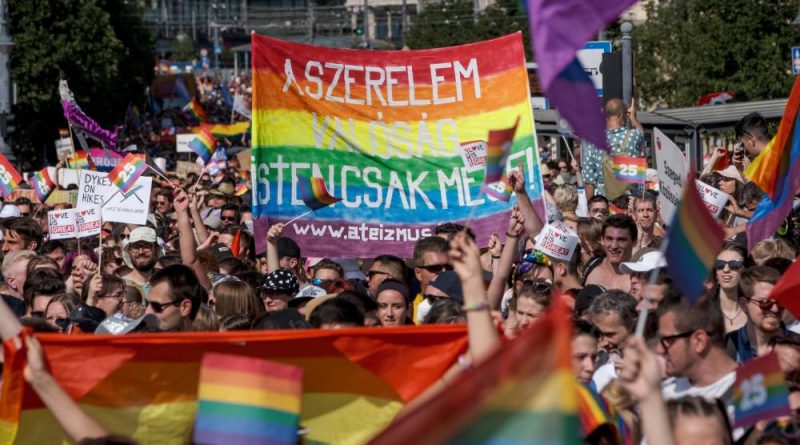 Demonstrators march during the annual Pride parade on 24 July 2021 in Budapest in defiance of the anti-LGBT+ campaign being waged by the Hungarian government. (Getty/Janos Kummer)

Hungary’s LGBT+ community faces an uncertain future, with legislative attacks and violence reaching a crescendo this year – but activists remain hopeful that the tide is slowly turning.

Since Viktor Orbán and his Fidesz party returned to power in 2010, it has “systematically undermined the freedom and equal rights of sexual and gender minorities”.

That’s the verdict of Háttér Society, which has fought for the rights of queer people in Hungary since it was founded in 1995, and is among Orbán’s loudest critics.

Last year, Orbán amended the constitution yet again to change the definition of family and effectively implement a ban on adoption by same-sex couples. His government also ended legal recognition for trans people, and has threatened to hold a referendum targeting LGBT+ rights and trans kids even further.

But Luca Dudits, communications officer for the Háttér Society, told PinkNews that it was Hungary’s anti-LGBT+ propaganda law, which went into effect in July and banned the “promotion” of queer lives to minors, that “really changed things” for the worse.

She described it as an “alarm bell” for the queer community and allies.

“That was the point where we understood the fact that we have rights… does not mean that [the government] cannot roll [them] back,” Dudits said.

“The propaganda law really showed people how inhumane [they can be], and that was a turning point for the general population.”

A lot of people in Hungary “don’t want to deal with politics,” she added, with a “general apathy” making it hard to rally opposition. But the bitter tase of the propaganda law resulted in “solidarity that was never seen before”, leading to unprecedented pro-LGBT+ protests.

“That was the biggest LGBTQI protests in Hungarian history, apart from the Pride marches, and it was absolutely incredible.

“We thought there would be a few thousand – like 2,000 or 3,000. I was one of the people speaking on stage, and when I saw how many people were out there, I almost didn’t want to believe it. We felt like we had the people with us.”

Despite this wave of support in the wake of the hateful legislation, the Háttér Society has seen an increase in reports of hate crimes against the LGBT+ community, surpassing its usual annual total by July of this year.

This tallies with a report published by the Council of Europe, the continent’s leading human rights organisation, in September which reported a “marked increase” in anti-LGBT+ hate speech and hate crime across Europe and singled out Hungary, as well as Poland, Russia, Turkey and the UK.

Dudits noted that there’s also been an uptick in victims sharing their stories online to raise awareness.

“The fact that people feel that they’re able to put this out on social media, and they receive a lot of support, I think that this is showing the shift in the attitudes and the allyship to LGBTQI people,” Dudits said.

The European Commission, the EU’s executive arm, has launched legal action against Hungary, as well as Poland, for “violations of fundamental rights of LGBTIQ people”.

The case could reach the European Court of Justice, which may impose steep financial penalties.

Hungary’s upcoming election could also bring change – but it remains to be seen whether or not that would be to the benefit of the queer community.

In October, a coalition of six parties came together to elect conservative politician Péter Márki-Zay as the ​​opposition’s joint candidate for prime minister, in the hopes of unseating Orbán next spring.

Márki-Zay described himself in an interview with AFP as a “traditional conservative” and practicing Catholic. The provincial mayor said he wants a Hungary where “love with rule” instead of the “hate campaigns” that Orbán has launched against the LGBT+ community.

However, Dudits raised concerns about Márki-Zay’s political campaign. While on the campaign trail, Márki-Zay claimed in an interview with Euractiv that it was ironic that Fidesz has been “conducting hate campaigns against the gays” as the party has the “largest number of gays in politics”.

He has suggested that a member of Orbán’s family – who is not out – is gay, while simultaneously criticising the prime minister for his “immoral, evil and inhumane” campaign of “hatred against gay people”.

This has given Dudits “a lot of doubts” about Márki-Zay’s supposed support for the LGBT+ community.

“What is the difference between Orbán using anti-LGBTQIA [rhetoric] to secure his campaign, and Márki-Zay outing [people] to fuel his political narrative?” she asked.

The question also remains as to whether Márki-Zay’s claims to back LGBT+ rights would “crystallise in actual legislation and actual support”.

The Hungarian government’s assault on the LGBT+ community has led to international outcry. Dutch prime minister Mark Rutte declared earlier this year that, as far as he was concerned, there is “nothing left for [Hungary] in the EU” should the government continue attacking the queer community.

But Dudits warns that such criticism must keep in mind that it is the Hungarian government, not all Hungarian people, who are anti-LGBT+, despite Orbán’s propaganda.