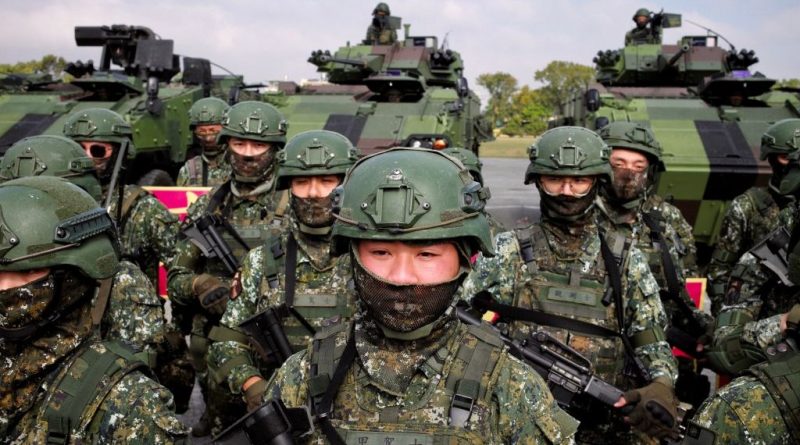 
As Taiwan increasingly fears threats from China to its sovereignty, Taiwanese president Tsai Ing-wen on Dec. 27 unveiled plans to extend the compulsory conscription program for men born after 2005 from the current four months of mandatory service to a year—the latest in several recent moves to boost the self-governing island’s defense capabilities.

The extension, set to take effect in 2024, is part of Taiwan’s new “force realignment plan,” which also includes increasing its reserve personnel. Data from the International Institute for Strategic Studies’ (IISS) Military Balance 2022 report shows that the island’s 169,000-strong active military personnel is currently backed by some 1.66 million reservists.

Taiwanese authorities have also beefed up the 2023 national defense budget to more than $500 billion Taiwanese dollars ($19B USD), a nearly 15% increase from 2022 allocations, for enhancements to air and naval combat systems.

Whether or not these changes may do much to deter a potential near-term invasion from China remains to be seen, says Kitsch Liao, assistant director of the Atlantic Council’s Global China Hub. Though China’s 2-million-strong armed forces is undoubtedly superior, the threat of a costly armed engagement may encourage Beijing to pursue non-military scenarios to try to coerce Taiwan under its control. “The entire situation is extremely complex,” Liao tells TIME.

Read More: These Are the Top Global Stories to Watch in 2023

Below is a breakdown of how Taiwan’s and China’s armed forces compare to regional and global counterparts, based on figures from the 2022 IISS report. However, it should be noted that numbers alone may not illustrate the whole picture, Liao warns, citing Russia’s struggle to overpower Ukraine despite the latter’s relatively smaller defense forces.

Considered the biggest threat to Taiwan, China’s opaque People’s Liberation Army (PLA) underwent a major restructuring in 2015 and is on its way to meet self-imposed modernization goals by 2035. A 1984 law requires males over 18 years old to register for two-year military service, but conscription has never been enforced due to high volunteerism.

An ally of Taiwan, the U.S. military allocated a record defense budget for 2023, including $10 billion for financing weapons specifically for Taipei, a first-of-its-kind move that roiled Beijing.

Read More: Why Protecting Taiwan Really Matters to the U.S.

Though all men in the U.S. aged 18-25 must register with the Selective Service and may be drafted upon an act from Congress, the country’s armed forces have been entirely volunteer-based since 1973.

Russia conscripts men aged 18-27 twice a year: roughly 1.2 million are eligible at any given time, with only half called to serve. But embroiled in its invasion of Ukraine, the country’s military manpower is under strain, and its latest draft to reinforce the assault on Kyiv reportedly yielded recruits unfit for duty. Russia is also a strategic partner of China, with the two countries having conducted joint military exercises as recently as December.

The Australian Defense Forces improved amphibious warfare capabilities in 2022. Its 2021 alliance with the U.S. and the U.K. is also seen as a response to the growing Chinese defense threat.

Thanks to its proximity, Japan could be on the frontlines of any conflict over Taiwan. The U.S. and Japan have reportedly drawn up a plan in the event of a Taiwan “emergency.