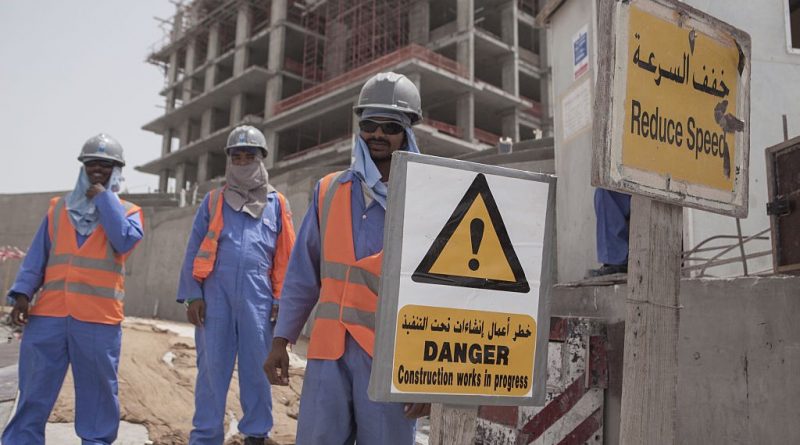 
The death of migrant workers erecting infrastructure for Qatar’s World Cup over the past decade once again made headlines earlier this week. In an interview, Hassan al-Thawadi, secretary general of Qatar’s World Cup organizing committee, told British TV presenter Piers Morgan that “around 400, between 400 and 500” migrants died. “I don’t have the exact number. That’s something that’s been discussed,” he said.

The estimate is drastically higher than any other previously offered by Qatari officials.

Yet the World Cup committee that al-Thawadi steers swiftly walked that comment back, echoing prior Qatari statements that 37 non-work related migrant deaths and three work-related ones took place from 2014 to 2020. Rights groups have criticized both estimates, viewing them as vast undercounts of the human tragedy of the tournament.

“Companies are going out of their way to make sure that independent labor inspectors do not find these workers, so they try to hide the treatment of [them],” says Mustafa Qadri, founder and executive director of Equidem, a labor rights consultancy reporting on the ground in Qatar. “So if that’s how workers are treated in terms of forced labor, it raises questions around the death [toll] as well.”

In 2021, The Guardian reported that at least 6,500 migrant workers died in Qatar since it won the right to host the World Cup a decade ago. However, in an Oct. 15 Twitter thread, Marc Owen Jones, an associate professor at Hamid Bin Khalifa University in Doha, called the headline of the piece misleading and said it was the “MOST RETWEETED article about the Qatar world cup in English,” sharing an analysis of tweets in one post.

“The 6,500 figure actually refers to all deaths of migrant workers from Pakistan, Sri Lanka, Nepal, India, and Bangladesh, regardless of cause,” he said.

Max Tuñón, head of the U.N.’s International Labour Organization (ILO) office in Doha, which carried out a 2021 analysis of data on occupational deaths and injuries in Qatar, says determining the number of deaths is complicated for a number of reasons. Tuñón cites ministries that use different data collection methods, the complexity of when to attribute a death directly to work, and deciding what constitutes a World Cup project.

Still, Goldblatt said that the 37 figure cited by Qatari officials is “disingenuous” and “based on a definition of ‘World Cup projects’ that includes only a handful of prominent initiatives, all of which observe the highest health and safety standards.”

Human rights groups put the death toll in the thousands.

“There is clear evidence of thousands of migrant worker deaths in the lead-up to the World Cup,” said Human Rights Watch’s Michael Page and Minky Worden in an article following al-Thawadi’s comments.

“Over the last decade, thousands of workers have returned home in coffins, with no explanation given to their loved ones,” said Steve Cockburn, Amnesty International’s head of economic and social Justice, in an article on Tuesday. “The continued debate around the number of workers who have died in the preparation of the World Cup exposes the stark reality that so many bereaved families are still waiting for truth and justice,” he added.

What conditions do migrant workers face in Qatar?

According to a 2016 report by Amnesty International, a metalworker who worked on Khalifa International Stadium, one of eight FIFA 2022 World Cup venues, said in 2015 that migrant life in Qatar is “like a prison.” The metalworker said he works long hours in extreme heat and was told that there would be “consequences” if he ever complained. “Now I am forced to stay in Qatar and continue working,” he said.

Qatar is home to 2.9 million people but only 300,000 of them are citizens. The rest are mainly white collar workers largely from the Global North or migrants mostly from Asia and Africa, working in everything from domestic work to the service industry to construction.

Qatar previously used the kafala system, where workers must have a sponsor who retains power over whether they can change jobs or even leave the country. Rights groups have spent years documenting how kafala underpinned the exploitative system for migrant workers, from “passport confiscation to delayed wages and forced labor,” according to Human Rights Watch.

A new labor law in 2020 ended the exploitative kafala system. But Tuñón told Vox last week that, “We don’t say the kafala system has been abolished, but we say the most problematic elements of kafala have been dismantled.”

Qadri of Equidem says he has worked with the government and ILO on legal reforms that established a workers’ wage fund, which pays a laborer their income when an employer fails to. He says these measures are “significant” but there is a “lack of adequate and consistent enforcement.”

But Qadri says that Qatar must address a deeper structural inequality for more robust and lasting reforms. “What we need is leadership from Qatar, not excuses and gaslighting for very real, concrete human rights failings that are hurting and killing people,” he says.