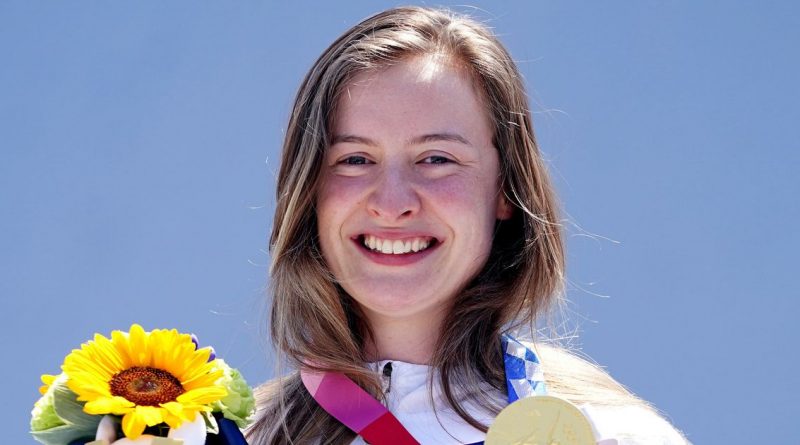 This was the first time Charlotte Worthington had ever landed the 360 backflip during a competition, having tried to land it in the first round but unfortunately fell off her BMX.

Having taken a fall in the first round after attempting the 360 backflip, it ended her time slot, giving her a low score.

This led to the 25-year-old making history in the second round. Charlotte landed her first-ever 360 backflip, pushing herself with further tricks to enable her to strike for gold.

And it certainly made up for the first round and massively paid off, giving her a high score of 97.50 from the judges.

Charlotte Worthington won a gold medal at the Tokyo 2020 Olympics
(

The triumphant return in the second round took place just 30 minutes after her initial fall, but Charlotte displayed a perfect and faultless routine.

This is the BMX star’s first Olympic medal, becoming an Olympic champion and signifying a remarkable moment in BMX history.

Talking to the BBC shortly after winning gold, Charlotte said: “I’ve been dreaming about this for four years and it still feels like I’m dreaming.

“It was incredible. I’ve not been doing that trick for that long, but we’ve been trying to find that big banger trick and when we found it we were like, ‘I think this is the one’.”

Charlotte, 25, was born in Manchester, and only began taking BMX seriously at the age of 20 just before Freestyle BMX was added to the Olympics in 2017.

Before focusing on her Freestyle BMX, Charlotte was a full-time chef at a Mexican restaurant after leaving college.

She worked as a chef at Racconto Lounge in Bury, near Chorlton for three years before ditching in the chef whites for helmets and handlebars full-time.

Plans in 2018 for a BMX team began and therefore Charlotte’s journey to Olympic dreams.

Charlotte began taking BMX seriously when she was 20
(

Charlottes, mum, Sarah told the Radio Times : “She just really did BMX freestyle as a hobby, which she loved. She tried to cut her shifts down so she could get more time in the skate park but she still managed to keep going off to competitions all over the place.

“She’d use her holiday time at work to go and do stuff.

“The big turning point was this funding from British Cycling. She had a proper way (to do it) which meant she could give up the shift work and then she rapidly improved and ended up winning the World Championship in China. That qualified her for the Olympics.”

In 2019, Charlotte was accepted onto the Great Britain Cycling Team Programme in Freestyle park, the same year she won the Inaugural British and European titles.

Charlotte started BMX as a hobby
(

She later became the first British woman to ever win a world medal, taking bronze in the UCI – Urban Cycling World Championships.

As well as picking up her first Olympic medal this year, she also won bronze at the Women’s BMX Park in the 2021 Urban Circling World Championships held in Montpellier.

Fellow BMX freestyler, Hannah Roberts from the USA has been hot on Charlotte’s tails in several competitions, having beaten her in both the 2019 and 2021 Urban Circling World Championships.

But finally, this was Charlotte’s time to come ahead of Hannah once and for all.

Adding to her BBC interview, paying tribute to Hannah, Charlotte said: “And to be honest I wouldn’t have any of those tricks if it wasn’t for Hannah. So Hannah’s made me push so hard since day one.

“This is the first time I’ve ever beaten her. So if it wasn’t for Hannah Roberts we wouldn’t be this far anyway.”