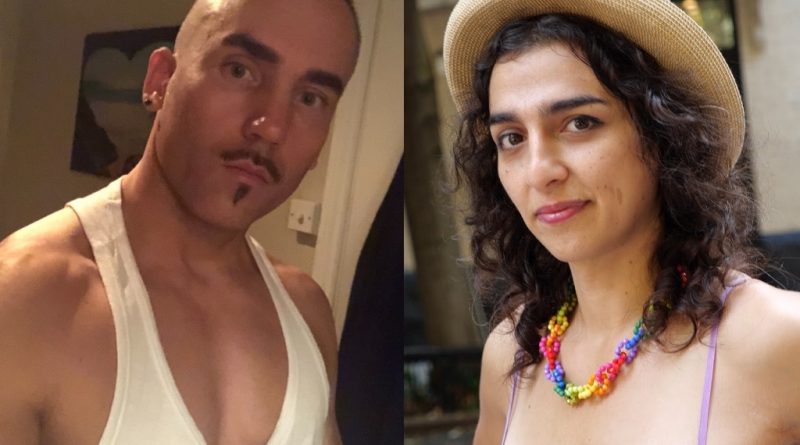 Sam Thomas and Lara Americo have seen their lives affected by alcohol. (Provided)

To mark Alcohol Awareness Week, we speak to LGBT+ people and experts about the impact alcohol has on the community.

Sam Thomas didn’t start drinking until he was 24 years old – but when he did, it gradually took hold of his life.

Over the years that followed, Sam developed an addiction to alcohol. It was a slow, insidious process – the volume of alcohol he consumed increased until one day, it became a daily habit.

Sam’s experience is not unique – research tells us that LGBT+ people are disproportionately affected by alcoholism and alcohol dependency. A 2018 study from Stonewall found that one in six LGBT+ people reported drinking almost every day over the last year, while that figure increased to one in five for gay, bisexual and trans men.

That’s backed up by international research, which has consistently found that LGBT+ people are more likely to experience alcohol addiction or dependency. In many ways, the link isn’t all that surprising – alcohol can dull the effects of trauma and the daily stresses that come with being part of a minority group.

At least part of the reason Sam started drinking was because he was trying to cope with a series of traumas he had experienced throughout his life. He has now been sober for two years, but looking back, he thinks homophobic bullying played a significant role in his addiction.

Sam started drinking when he was in his mid 20s after a friend put vodka in his drink as a “joke”. At that time, he had just recovered from bulimia, a condition he had been battling since he was a teenager growing up in Liverpool.

“Basically, over the course of time, I replaced bulimia with alcohol, so it kind of evolved in that way,” Sam tells PinkNews. “I had bulimia from the age of 13 to 21, and that was a direct result of homophobic bullying at school. From the age of 21 there was no sort of default coping mechanism, really. I went through a few years of relative stability – I got involved in volunteering, I started writing, I established a support network, which meant that the bulimia was effectively redundant.”

However, as time went by, Sam started to realise that the “underlying trauma” had not gone away.

“The damage of the bullying hadn’t gone away. It was lying dormant,” he says.

Sam says he doesn’t blame the friend who put vodka in his Diet Coke for his alcoholism. “I do think at some point I would have started drinking more normally. There was no reason for me to remain teetotal from that point, and being a bit more comfortable, being on the gay scene, I probably was missing out to an extent.”

The following year, Sam’s mother passed away – and his drinking ramped up. By the time he was 27, he was drinking every night of the week.

“It wasn’t huge quantities, but it was more than enough. And then eventually, it was three bottles or more – but that was probably later on in my twenties. It’s a bit hard to say when my alcoholism began – there’s no line that you cross. It’s a progressive disease, it’s one of those things that happens quite gradually over time.”

Sam eventually realised he was addicted to alcohol when he tried to give it up. He suffered terrifying withdrawal and ended up in hospital. Doctors were unable to identify what was wrong with him – they told him he had a virus and sent him on his way. But he didn’t get any better. The experience culminated with him being signed up to a drug and alcohol service, and he did a 10-day detox in an addiction centre.

But Sam wasn’t yet ready for a life of abstinence. He relapsed the same day he was discharged, just four hours after he left the facility.

“At that point, other people around me started to realise the seriousness of the situation. So then the cat was out of the bag.”

Looking at the situation now, Sam thinks the issues really started when he was still at school, growing up just outside Liverpool “at a time when it was really not popular to be gay”.

“The very beginning of my alcoholism is the bullying at school. It was embedded very early on,” he says.

Alcoholism is a really serious problem that affects the LGBTQ+ community.

Ben Kaye is the LGBTQ+ lead with We Are With You, a charity that offers free, confidential support to people struggling with alcohol, drugs or mental health issues. As a former addict himself, he knows that substances like drugs and alcohol can be complicated and often brutal forces for LGBT+ people.

“It’s fair to say that alcoholism is a really serious problem that affects the LGBTQ+ community,” he says. He references research that suggests up to 25 per cent of queer people have a moderate alcohol dependency compared to 10 per cent of the general population.

“Some groups within the LGBTQ+ community have even higher rates of alcohol abuse and misuse. The group with the highest drinking rates in the LGBT+ community is actually bisexual women, according to a survey we carried out. Twenty-five per cent of bisexual women self-reported to have heavy drinking issues. Awareness within the community is growing, treatment programmes and facilities are available to meet the specific needs of people.”

LGBT+ people over the age of 50 are also more likely to drink to excess, Ben says. “Basically they faced this intense bigotry when they were younger, and they use it as a crutch, because it’s accessible and easy. So the bigotry, emotional distress, low self-esteem, all of these things are going on in the background. Really, people turn to alcohol in a way to self-medicate, and as time goes by, that makes them worse – they start drinking more and a downward spiral has begun. It’s kind of a catch 22.”

Sam’s experience is echoed by Lara Americo, who is transfeminine. She recently managed to gain control over alcohol – but it hasn’t been an easy journey.

Lara started drinking as a teenager because they thought it was “the cool thing to do”. She also saw adults in her life drinking and wanted to be more like them.

“Seeing my family’s alcoholism proved to me that alcoholism was genetic,” Lara tells PinkNews. “I was always afraid to drink. I’m still afraid to drink but I do.” When she moved to New York City, she found that alcohol was even more accessible – and drinking was inevitably a part of social gatherings.

“It became hard to avoid. I found myself having alcohol cravings and realised I was becoming addicted,” she says. Like Sam, Lara feels that her drinking was innately connected to the traumas she has experienced throughout her life.

“I realised that alcohol was becoming a way for me to get a dopamine hit and a chance to release some of my trauma into the open air,” she says. “It wasn’t healthy. It’s hard to avoid trauma as a trans person and alcohol is an awful way to confront it. I needed to find a better way.”

Lara also believes part of the problem with alcohol in the LGBT+ community is that so many social events centre around it. For so long, queer bars have been the only safe-spaces for LGBT+ people. This is starting to change, but the damage has already been done.

“Things are different now that we can meet people on dating apps and social media,” she says. “We’ve seen the effects of alcohol on the older generations and we don’t want that to happen to us. I think there are more queer sober spaces popping up because of this.”

Looking back on her journey, Sara says alcohol would have taken control and ruined her life if she hadn’t gotten a handle on her drinking. “There is too much for me to live for,” she says. She now allows herself to drink once or twice a week, but no more.

“If I start to go beyond that, I know there is something wrong,” she says. “There’s always another motive for substance abuse. Not just the substance. I learned this from my family and my chosen family.”

Readers who are affected by the issues raised in this story are encouraged to contact We Are With You (www.wearewithyou.org.uk) or Samaritans for free on 116 123 (www.samaritans.org).