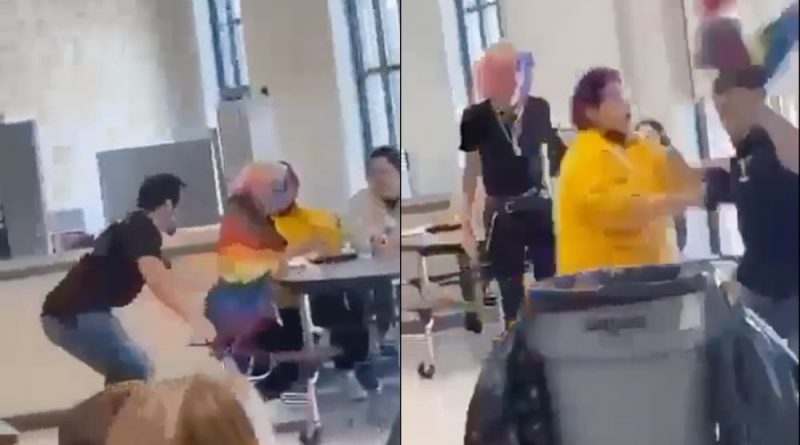 A Georgia high school wrapped in a rainbow flag was assaulted by a student. (Screen capture via Twitter)

Terrifying video footage showed the moment a Georgia, US, high school student wearing a Pride flag was dragged out of their seat – all because of a dare.

A viral Twitter video which has tallied nearly 50,000 likes at the time of writing shows a pupil rush up to the student to pull down the rainbow flag as they sit in the cafeteria.

The attack forcefully drags the young person across the floor until he manages to rip the flag out of their hands and throws it in a nearby rubbish bin.

Elsewhere in the video, reportedly filmed at the Lowndes High School in Valdosta last Thursday (2 September), students can be seen smiling and giggling as the young flag-owner is battered around.

The incident reportedly took place because the assailant was dared to do so by another student for $5.

A juvenile has since been charged after the Lowndes County Sheriff’s Office was notified about the scuffle by the school’s resource officer.

Sheriff Ashley Paulk confirmed that the suspect has been charged with disorderly conduct, simple battery and disruption of a public facility. The state’s Department of Juvenile Justice is now overseeing the case.

“This is a f**king hate crime and I’m so f**king LIVID that [the] girl at the table was smiling and laughing at this kid getting assaulted,” tweeted José, a Lowndes High School graduate who uploaded the video on Twitter.

“There are plenty of people (like the person who recorded the video) who are defending the assaulter’s actions,” José added, “so we gotta be loud and vocal to make sure these homophobes don’t ever think it’s cool to do something like this.”

“I feel like me and my friends are unsafe because the majority of us are part of the LGBT+ community and you would think going to school would be a safe place,” a witness told WALB News 10, “but there’s people with so much hatred that will hate you and do anything they can to just at you because you’re different and want to express yourself.

School officials have vowed to take action on the attacker while stressing that the victim was not injured during the struggle.

“We are aware of a social media video involving two students and a Pride flag. We take the well-being and safety of our students seriously,” a Lowndes High School spokesperson told the news outlet.

“Our staff works hard to provide a safe environment where all of our students feel valued.

“As soon as the Lowndes High School administration was aware, the matter was investigated, they ensured that the victim was not hurt, and addressed the other student following the appropriate consequence outlined in the student code of conduct.”