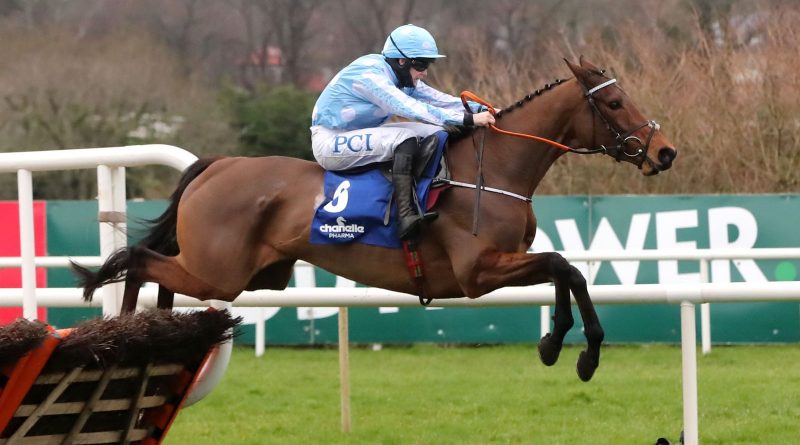 Honeysuckle will face a maximum of five rivals in her bid for a third victory in the Chanelle Pharma Irish Champion Hurdle at Leopardstown on Sunday.

Henry de Bromhead’s brilliant mare will be a hot favourite to complete the hat-trick on day two of the Dublin Racing Festival and extend her overall unbeaten record to 14 in the hands of Rachael Blackmore.

“Honeysuckle is just a special mare – she is above and beyond anything else, she has a massive will to win and she has dug deep a few times when she has really had to,” said Blackmore.

“She is very versatile in a lot of different areas and to be able to adapt as she does to different situations, different races and different tactics makes her a dream to ride. Henry and everyone in the yard do a fantastic job with her.

“The Dublin Racing Festival is a fantastic weekend of racing and it’s brilliant that Honeysuckle is going for another Irish Champion Hurdle. Hopefully we can put up a good show again.

“It’s great to have the crowds back – they bring such a special atmosphere. Honeysuckle got an unbelievable reception at the Dublin Racing Festival in 2020 and I really hope we will be walking back into the winners’ enclosure on Sunday.”

Honeysuckle’s biggest threat could be the Willie Mullins-trained Appreciate It, who has not been seen since his 24-length success in the Supreme Novices’ Hurdle at last season’s Cheltenham Festival.

The eight-year-old was due to pursue a career over fences this term, but an injury suffered before Christmas prompted a change of plan.

Mullins has also confirmed Saint Roi and Echoes In Rain, who finished third and fourth respectively behind stablemate Sharjah, who has been taken out of this weekend’s contest, in Leopardstown’s Matheson Hurdle in December.

The Mullins-trained Galopin Des Champs will be expected to play a starring role in the Ladbrokes Novice Chase following his scintillating chasing debut at the track over the festive period.

He could face Noel Meade’s Beacon Edge and Elliott’s Fury Road, among others.

Chacun Pour Soi will bid to bounce back from Tingle Creek disappointment by bagging a third win in the Ladbrokes Dublin Chase.

Among his seven possible opponents are two British raiders in the Paul Nicholls-trained Greaneteen and Sky Pirate from Jonjo O’Neill’s yard.

Likely contenders for the Tattersalls Ireland Novice Hurdle include Sir Gerhard, one of five Mullins-trained entries, and Elliott’s Mighty Potter.

The 10-year-old saves his best efforts for the Foxrock venue, finishing second and first in the last two runnings of this race as well as winning and being placed twice in the Savills Chase.

He was last seen finishing a close-up third in the latter event behind Galvin and A Plus Tard, neither of whom will be in opposition this weekend.

Kemboy is one of four potential runners for Mullins, who has saddled a record 10 previous winners of the Irish Gold Cup.

He could be joined by Asterion Forlonge, who fell at the final fence when seemingly booked for second behind stablemate Tornado Flyer in the King George, as well as Cilaos Emery and Janidil.

Minella Indo chased home Kemboy 12 months ago before going on to win the Cheltenham Gold Cup for De Bromhead. He will return to Leopardstown with a point to prove after pulling up in the King George.

British hopes will be carried by the Paul Nicholls-trained Frodon, with Gordon Elliott’s trio of Delta Work – winner of this race two years ago – Conflated and Mount Ida the other hopefuls.

Ten horses have stood their ground for the opening Grade One of the weekend – the Nathaniel Lacy & Partners Solicitors “50,000 Cheltenham Bonus For Stable Staff” Novice Hurdle.

The two that dispute favouritism are Elliott’s Hollow Games and De Bromhead’s unbeaten Journey With Me, while Bronn could put his unbeaten record on the line for the Mullins team.

The Mullins-trained Vauban – narrowly beaten by Fil Dor’s stablemate and subsequent Cheltenham winner Pied Piper on his Irish debut – is rated his biggest threat by bookmakers.

Despite the enforced absence of ante-post favourite Ferny Hollow, Mullins still appears to hold the ace hand in the Irish Arkle, with Blue Lord, Haut En Couleurs and Saint Sam among seven possibles.

It might not be a Grade One, but the concluding Goffs Future Stars (C&G) INH Flat Race promises to be a hugely informative affair.

Mullins has whittled down his team to two, with Facile Vega – a son of the great racemare Quevega – the likely favourite following a runaway success on his course and distance debut.

The champion trainer has also left in another course winner in Embassy Gardens, with Peter Fahey’s The Big Doyen and and Sandor Clegane from Paul Nolan’s yard also in contention.