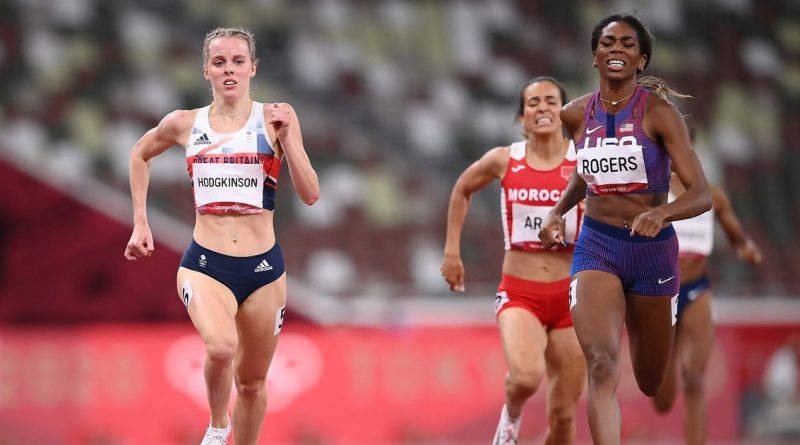 
Britain has three finalists in today’s final of the 800 metres for women: Hodgkinson, Jemma Reekie and Alex Bell

Hodgkinson: “I like to run without fear, to just go for it. The 800 for me is definitely a sprint, not middle distance” (

Going from Keely to Kelly looked a giant leap a year ago. It doesn’t seem quite so big now, writes Alex Spink in Tokyo.

At lunchtime today Keely Hodgkinson attempts to win a first Olympic 800m medal for Britain since Kelly Holmes was crowned champion in Athens.

The Wigan teenager watched reruns of Dame Kelly’s twin triumphs before flying out to Japan to get her in the mood.

And now the 19-year-old aims to use that inspiration to power her onto the podium.

“I watched Kelly’s races because they’re so special,” said Hodgkinson, who is tipped by her coach Jenny Meadows to one day take Holmes’ British record.

“I would definitely like to her emulate her – though I was only two when she won her race.

“I like to run without fear, to just go for it. The 800 for me is definitely a sprint, not middle distance.

“In championship racing I believe anything can happen once you’re in the final. As long as you back yourself I think you can do great things.

“I’m going to go for it and hopefully I’ll walk away with some metalwork… but we’ll see!”

With the sprints having turned sour and Jemma Reekie and Alex Bell joining Hodgkinson on the start line, this women’s 800 is Britain’s best chance of an individual track medal.

Scottish star Reekie boasts the fastest time of the three but Hodgkinson beat her at the British Championships and is riding a wave of self-confidence.

Reekie: “I know I’m in amazing shape, but it’s an Olympic final and I’ve got to race it smart”
(

“I love being in the championship environment, I love the pressure, I feel I really can perform under pressure,” she said on the eve of competition here.

“I’m excited to put myself up against the world’s best and see what I can do.

“I have loved the Olympics since I saw Jess Ennis win on Super Saturday during a family holiday in Marbella.

Bell: “Never in my wildest dreams did I think that I would be an Olympic finalist”
(

“By Rio four years later, though I was only 14, I had won my first national medal.”

She has continued that meteoric rise, though fortunate the Olympics were postponed a year.

Without that they would have come too soon. With it she has become European Indoor champion and her deadly kick has her rivals on high alert.

Hodgkinson is the same age as race favourite Athing Mu
(

She may be too young but, then again, the race favourite is Athing Mu – and the American is also 19.