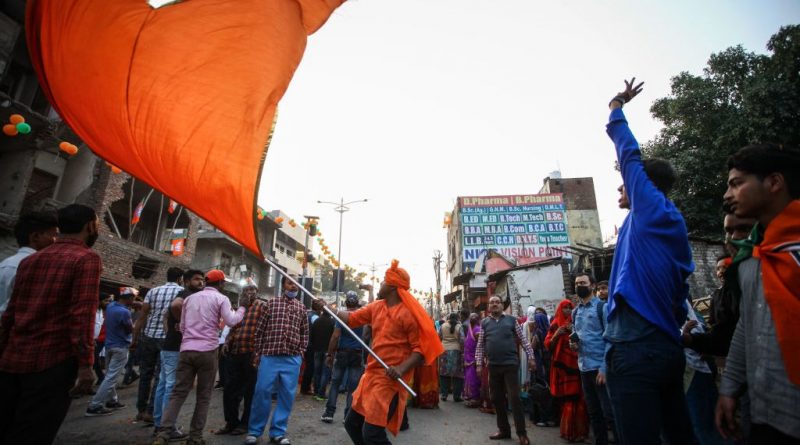 
Brassy beats, poorly-synced visuals, and jarring edits haven’t stopped Prem Krishnvanshi─ an engineer-turned-singer from the north Indian state of Uttar Pradesh─ from becoming a sensation on YouTube and social media. It’s his music’s message that resonates more than the quality. Krishnvanshi is one of several increasingly popular artists in India producing a relatively new rancorous genre of music, commonly known as “Hindutva pop.”

Read More: With Religious Tensions Worsening in India, Understanding Caste Is More Urgent Than Ever

Recently, Hindutva pop has also been blamed for instigating violence. Syed Zubair Ahmad, founding editor of Muslim Mirror, an independent media organization that tracks cases of violence against Muslims in India, believes the music normalizes the dehumanization of Muslims in India and encourages listeners to commit violence. “They are making people inure to the violence that accompanies these songs.”

“Hinduo kaa hae Hindustan, Mullo jaao Pakistan” (India is a land of Hindus, Muslim preachers should go to Pakistan) is a line from one of Krishnavanshi’s hits, which YouTube pulled from his official channel but hasn’t been able to completely remove from the platform as it continues to be reuploaded by others.

A common refrain of Hindutva pop songs is that Muslims of the country are disloyal and work for the interests of Pakistan, the neighbouring Muslim majority nation that has been at loggerheads with India since separating from it more than seven decades back.

“Secularism is the problem of our country,” Krishnvanshi tells TIME. “Whatever I sing is, in a way, a response to the extremist ideology propagated by some Muslims. That invokes division, not our songs.”

Read More: Is India Headed for an Anti-Muslim Genocide?

“I find it my duty to spread awareness about our history. Our true history, not the concocted one,” he explains, referring to the common rightwing belief that India’s history taught in schools overemphasizes Muslim kings rather than Hindu emperors. “I believe that my nation and Hindutva are very important to me and I want to talk about these topics.”

“My aim is not to hurt Muslims though,” he adds. But Krishnvanshi’s lyrics speak for themselves.

“Insan nahi ho salo tum ho kasai, boht huwa Hindu Muslim bhai bhai,” (You are not humans, you are butchers, enough of this Hindu Muslim brotherhood) he rants in another song.

Krishnvanshi’s music videos often appear as tributes to the BJP, Modi, and Yogi Adityanath, a saffron-robed monk and firebrand Hindu nationalist leader known for his anti-Muslim tirades. Adityanath quickly rose through the ranks of the party to become the Chief Minister of Uttar Pradesh, India’s largest state, in 2017 before being re-elected in 2022.

Krishnvanshi takes pride in singing about the two most popular and powerful men in today’s India. “Yes, I sing about Yogi and Modi,” he says. “The songs in praise of them become instant hits.” Fittingly, Krishnvanshi has received state accolades and recognition for his songs.

“These singers have the full support of the government,” says Ahmad. “This is a win-win situation for both. The singers promote their leaders and policies, and the government in return provides them support and validation.”

Krishnvanshi is not the only singer thriving on the rise of Islamophobia in India. In the vast northern expanses of the country known as the “Cow belt,” a hotbed of conservative Hindu nationalism, Hindutva pop is in huge demand, both online and offline.

Laxmi Dubey is one such singer of this rapidly emerging cohort. Born in the central Indian state of Madhya Pradesh, she started as a small-time reporter at a local daily before turning to music as a profession.

Donning a turban and with vermillion powder smeared on her forehead, Dubey can often be seen dressed in saffron—a colour that has come to be associated with Hindu nationalism—while she sings in a ferocious voice. Her aggressive vocalization, parlance, and body language has made her a star in Hindutva circles, as she often gets called for events organized by rightwing ideologues in many states.

“I am proud of what I am doing,” Dubey tells TIME unapologetically when asked if she feels her songs may be too charged.“I have never sung anything against any religion. I have always promoted my religion, though,” she says.

Her songs like Har Ghar Bhagwa Chayega (Every House Shall Turn Saffron), which has been viewed more than 65 million times, explicitly call for Hindu rule in India. In that one, she sings in Hindi what roughly translates to, “In front of Hindu lions, the enemy will crumble … India would be of Hindus, only saffron would fly high.”

Dubey claims that these songs do not target any community, but the soundtracks are proving to be a trigger for violence against Muslims in the country.

Earlier this April, on the eve of the holy Islamic month of Ramadan, 25-year-old Abrar Khan was at home preparing to break fast with his family in the bustling city of Khargone in the central Indian state of Madhya Pradesh when he heard sounds blaring from loudspeakers at Talab Chowk, a busy road junction. A huge procession of rightwing Hindus brandishing swords and sticks had stopped there to celebrate Ramnavmi, a Hindu festival that celebrates the birthday of deity Ram. The frenzied mob stopped outside the nearby mosque and played incendiary Hindutva pop over speakers. Then they started to break into nearby Muslim homes, torching several of them, including Khan’s.

“I had a narrow escape, but I couldn’t save my home,” Khan told TIME months after the attack. “My house is located in the main area, so it was the first house they entered. I quickly ran away once they entered my place and managed to save my life.”

“They were constantly playing these provocative songs over DJ speakers before they attacked our homes,” he said. By all appearances, he added: “It was a pre-planned event.”

Khan also said he believes the mob was actively supported by local officials. “There didn’t seem to be any attempts to stop them. In fact, after the violence, the authorities, rather than catching the culprits, arrested dozens of Muslims and demolished their properties,” he said.

Ayesha Khan, a Muslim woman from the area whose house was also burnt in the violence, echoed similar concerns: “We are living in fear since mobs and government both punish us alike. To whom would we go for justice?”

While the rise of Hindu nationalist violence has led to uneasiness and fear among Muslims, many believe the Hindutva pop music phenomenon has worsened already strained relationships between communities. “These songs have clearly influenced the minds of the people from the majority who view us with suspicion. Even my Hindu friends are now hateful towards me. They have made everything about Hindutva, even the Independence Day celebrations,” said Khan.

“During Modi’s first five-year term, there were continuous attacks on Muslim individuals, which kind of made the community feel under siege,” Ghazala Jamil, an assistant professor at Jawaharlal Nehru University in New Delhi, told the Council on Foreign Relations in July. “The idea was that if you were a Muslim, you were liable to be attacked anywhere, anytime.”

Read More: What a Rising Tide of Violence Against Muslims in India Says About Modi’s Second Term

Rights activists and experts based out of India see an association between the rise of Hindutva pop music and the recent violence against the minority Muslim community. Aasif Mujtaba, a minority rights activist and founder of Miles2Smile Foundation, a nonprofit organization that serves Rohingya refugees and survivors of religious attacks across the country, believes that the hate-filled songs are increasingly becoming a prelude to the attacks against Muslims in India. “A definite pattern is clearly seen,” he says.

Mujtaba who tracks violence committed against the minority Muslim community says that in Khargone, where survivors like Khan and Ayesha lost their homes, incendiary songs by artists including Laxmi Dubey, Prem Krishnavanshi, and others were played that exhorted Hindus to commit violence.

“These songs are so provocative,” he says, “if you play it just once on the DJ, the violence will reverberate across the streets in no time.” Mujtaba says the use of such hate-filled songs before and during attacks has been observed all across the country. “You don’t need an instigator to incite violence anymore. You just set the tone, set the track, and the hate will rock, as these songs openly call for violence against Muslims,” he explained.

“These singers are helping government to further their narrative,” says Ahmad of Muslim Mirror, “that Muslims are unwanted and responsible for all the mess the country is in.”

“Considering that there is rarely any opposition to this new mass culture in the country,” he adds, “it seems we are in for big trouble.”