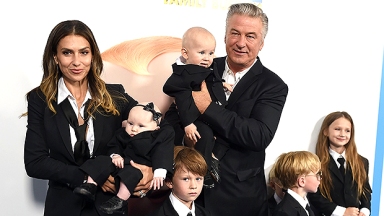 
Hilaria Baldwin has given birth to her seventh child with husband Alec Baldwin — a girl! The yoga instructor, 38, took to Instagram on Saturday, Sept. 24 to reveal their new baby has arrived. “She’s here! We are so excited to introduce you to our tiny dream come true,” she penned, revealing her name is Ilaria Catalina Irena Baldwin. The baby was worn on Sept. 22, 2022 and weighed 6 Lbs. and 13 oz. “Both she and I are happy and healthy. Her Baldwinito siblings are spending the day bonding and welcoming her into our home. Much love to you all. We are so happy to celebrate this wonderful news with you,” she added.

Hilaria announced she and the 30 Rock Star were expecting baby No. 7 in a heartfelt post on Instagram on March 29. “After many ups and downs over the past few years, we have an exciting up and a huge surprise: another Baldwinito is coming this fall,” she wrote, adding that their new baby was a “surprise.” She continued: “I’m sharing with you the moment we told the kids—as you can see, they are super excited! Our new baby is a very bright spot in our lives. A blessing and a gift during such uncertain times.”

The announcement video she shared showed her, Alec, and their six other kids looking excited. The couple shares sons Rafael Thomas, 6, Leonardo Angel Charles, 5, Romeo Alejandro David, 3, and Eduardo “Edu” Pao Lucas, 19 months.  They also have two daughters, Carmen Gabriela, 8, and María Lucía Victoria, 14 months. The couple welcomed Edu via surrogate in September 2020, and were over the moon to birth María naturally in February 2021. Alec is also the father of 26-year-old Ireland Baldwin, whom he shares with his ex-wife, Kim Basinger.

Although Hilaria admitted she wasn’t expecting to be pregnant again, she previously joked that having another child wasn’t out of the picture. “I have more than enough on my plate with 6 kids, but it is moments like this where I’m like: What’s one more? Don’t worry: I’m kidding,” she wrote on her Instagram story over a sweet photo of her cuddling one of her young ones. It looks like she wasn’t kidding after all.

The new addition to the Baldwin brood comes as Alec handles the aftermath of a deadly shooting on the set of Rust in which he allegedly pulled the trigger of a prop gun and killed cinematographer Halyna Hutchins and injured director Joel Souza. Hutchins’ family filed a wrongful death lawsuit against Alec in February, but he maintains his innocence. “I would never point a gun at anyone and pull the trigger at them, never,” he stated in a December 2021 interview with ABC News’ George Stephanopoulos.

Alec Baldwin’s Kids: Everything To Know About His 8 Children, From Oldest To Youngest